I'll make this quick because I'm sure you're as tired of reading about it as I am of writing about it. By the last day of the conference, I was almost used to the chairs that smelled of ass. I had gotten pretty good and didn't even really need to sit down to determine the relative nastiness of the chair. My senses were honed - I was a machine. A lot of the time I just sat on the floor in the back of the room, truth be told. But in my last session, I sat down in what I thought was a perfectly good chair.

A little while later, as the room is filling up, I smell what can only be described as rotten-cheese ass. I look around and there is nobody sitting to either side of me, and I'm pretty sure it's not me, since I just got out of the shower 30 minutes ago. I immediately assume it's my chair, and that my own hot ass reactivated some sort of latent funk that was embedded deep within its feeble padding. I bend down a little closer to see if I can make a positive ID, and I immediately see black dress socks directly under my chair. In my mind, I can see the invisible stink lines radiating directly into my nose. Goddammit, don't people understand that if your feet smell like your toenails are rotting off, you should leave your shoes on? You don't take them off and then shove your feet under someone else's chair. This has happened to me a few times on an airplane, but never before in a conference - so this was a first. I gave the guy a dirty look and then went to the back of the room and sat on the floor.

On Friday we hung around downtown disney and the highlight of the entire day was a fantastic dirty vodka martini that was the best I've ever had. When I ordered it, I didn't expect that the waiter would actually bring the ingredients to the table and make it in front of me, but that's what he did. Gorgonzola stuffed olives. My mouth is watering just thinking about this thing. My boss got food poisoning somewhere so never ended up meeting us for drinks.

On Saturday we took a quick day trip to Epcot, and if you've never been there it's pretty cool. However, if you've been there more times than you can count and you don't feel like going on Mission Mars, and the wait for the Soarin' ride is over two hours, then there's not much to do other than walk around and pay too much for stuff. We did see a really quick dolphin show at the Living Seas that was pretty amazing. Dolphins are smarter than me, in case you were wondering. I got to ride on a Segway, so that was something. It feels like snowboarding. That's the most accurate description I can give.

There are other things to see at Epcot, however. Amazing hairstyles is one thing that I particularly enjoy. This guy wins for 2007: 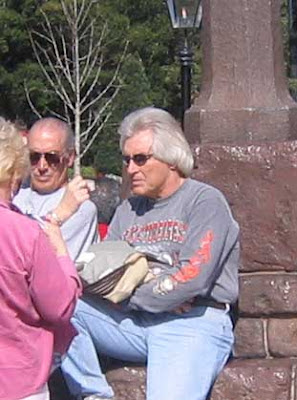 Bullets would bounce off that helmet. It was pretty damn breezy that day, and this thing did not move. My theory is that his hair was so ridiculously awesome that when he walked down the street, the wind actually stepped out of his way.

We also saw some cool skywriting. At first I was like, "Hey! Someone is going to propose to Jess!" 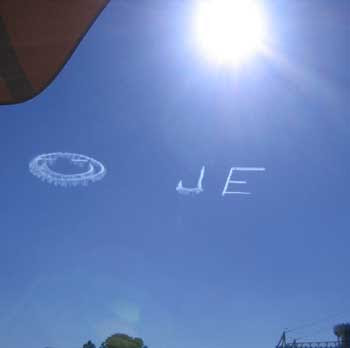 Then it all went directly to hell, (as I am sure I will be if hell actually exists): 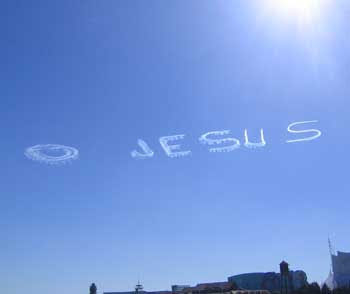 It was pretty exciting to watch, and by exciting I mean excrutiatingly painful. After about 5 minutes more, the pilot had managed to squeeze out a "U" and an "S" and I knew then that Jess was out of luck and would remain single forever.

Ten minutes later, he had JESUS LOVES, and there was still some part of me that was holding out for "SPICY CHIMICHANGAS" or "DIRTY MARTINIS" but I knew it was not to be. The only thing left to determine was whether the pilot was an egotistical born again, in which case the next word would be "ME" or whether they were traditional christians and were going to go with the more generic "YOU" and really annoy me by pushing their faith on me from above.

Luckily as I said, the wind was pretty stiff so by the time he was finished (it was "YOU" by the way) all you could see was "VES YOU" and it wasn't really all that offensive. But still... VES YOU too, Mr. Pilot man. VES YOU and the plane you flew in on.

All in all, it was a marginally better visit to Epcot than my last one, which involved a random small child running up to me, screaming at the top of his lungs, and then punching me full force in the nuts.
By Johnny Virgil at 10:38 PM