Doctor in the house?

Did you ever notice how quick Google is to judge? I typed "Is there a" intending to finish that sentence with "fixpack for Lotus Notes 8.5.1," but before I could, Google jumped to its normal obvious conclusions about what I was looking for: 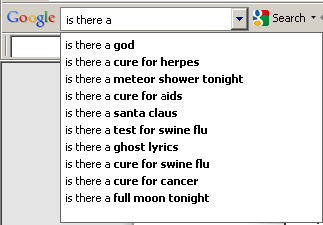 So it appears that Google thinks I am:
1. Questioning my faith in god (and, more importantly, santa claus)
2. Rightfully so, because Google also assumes I have a veritable smorgasbord of diseases that no self-respecting god or fat jolly saint who existed would possibly allow, and
3. I am also interested in listening to songs about ghosts while enjoying immediate celestial events.
So Google let me down, and I had to resort to texting a friend of mine who is in Orlando this week for the big geekfest at Disney. The fixpack comes out on Friday, if you're interested.
I realize I haven't been around much lately, but I hope to remedy that shortly. I've been busy doing "stuff" that doesn't involve writing, which makes me realize that I need to figure out a way to give up sleep completely in order to be able to do everything I want to do. I'm in the process of writing a longish childhood tale for your amusement, but it's not done yet. In the meantime, please enjoy this picture of a sign I saw in our mortgage broker's office this afternoon: 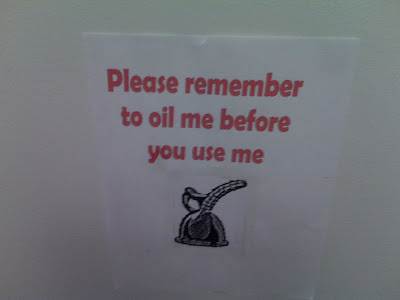 Words to live by, my friends.

Emerson, Lake and Board Games.

IM conversations with Yort always take a left turn out of the gate...
Me: Hey, I just found out that Keith Emerson and Greg Lake are playing down in Westchester. Want to go?
Yort: What are they playing? Football?
Me: No, Monopoly.
Yort: Borrrinng.
Me: No, no -- it's the Star Wars edition of Monopoly. And Emerson dresses up like a Wookie.
Yort: Sweeeet.

No Uggos or Fatties.

I am pretty looped on a couple of very good dirty vodka martinis right now, so no guarantees on this post. I saw this on the BBC the other day. I guess the holidays weren't kind to some of the beautiful people: 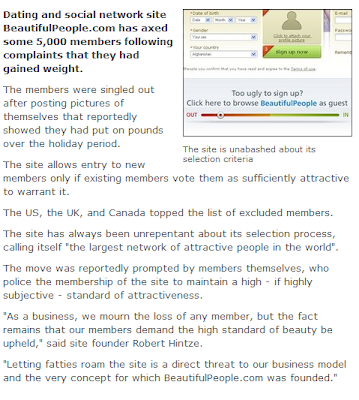 It sort of confirms what I always suspected. The Beautiful People are like a pack of wolves. If you show any sign of weakness, they are on you in a quick second, tearing off the tastiest parts and saving the rest for later.

"Letting fatties roam the site is a direct threat to our business model."

All I can say is I hope none of these so-called "fatties" finds out where you live, because if they do, your business model will be lying in a pool of blood next to your dead, beaten body. Especially if you don't have six-pack abs and a chiseled jaw. Or maybe especially if you do.

Out of curiosity, I checked out the site. Right on the front page I was immediately hit with a picture of a guy and a girl, and it could go either way as to whether the guy is actually prettier than the girl, and I'm not even gay. He actually looks a little like a girl who needs a bit of a shave. This got me to thinking about what constitutes "beautiful" since they cater to just about every country, and let me tell ya, there are some really ugly countries out there.

I also wondered where age fit in, if at all. Would someone like George Clooney be considered one of the Beautiful People even though he's getting up there? Or are all the BP's under 30? If you got kicked out for putting on a few pounds, would you get kicked out if you posted a picture that showed your crow's feet or your laugh lines? What about someone like Mick Jagger? He's probably had more sex in his lifetime than all the people on that site, yet in the classical sense, he's ugly as sin. I used to look at Mick Jagger and think that if he were a cab driver in New York City, he'd probably die a virgin. It's all relative, I guess. Power, wealth, plastic surgery or talent -- they can all make you appear more attractive. Then again, so can hanging out with people uglier than you are. That's what I do. (Hey, where are you guys going? You can't leave! Wait! Come back! OK, that's it. I'm not paying you to be my friends anymore.)

Speaking of paying, once you have been deemed "Beautiful" by the Others, you apparently have the privilege of paying $25 a month to continue your "membership." The founder said he'd rent out the membership list for things like exclusive club openings and such. But I think this will cause confusion and probably result in a bad rep for the club, because what will happen is this: On opening night Joey from Jersey will go to the club and then the next day he'll tell all his friends about the tons of hot women who were ignoring him there. Then the next weekend they will all go with him and Joey won't understand why the place is a now a sausage factory, and an ugly one at that.

Just for fun, I decided to see if the vaguely middle-eastern version of Johnny Virgil from this post could become a member of beautiful people, since I knew my real picture wouldn't have a shot. Since he appears to be from a foreign country of unknown origin, I randomly decided it should be Turkey, since I figured they had a pretty high tolerance for the ugly given the name of their country. I've never been there, so I have no idea how ugly they may actually be. After I signed up and created my profile, I did a Google search on "Turkish Girls" and the first image that came up was this one* so I obviously have no idea wtf I'm talking about. And now I want to move to Turkey.

Once you submit, there's a period of time where the already accepted Beautiful People can vote on you. After that, you're either a member, or you're Too Ugly To Belong. So far I'm doing pretty good: 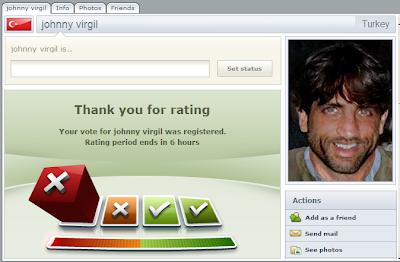 Yeah. You can't see it well in the picture, but there's a white indicator line that is slammed so hard to the left side of the bar that it's practically become part of the frame. If that graph were really in 3D, that red X would be poking your eye out right now. And apparently looking like Lionel Ritchie doesn't count for much to the Beautiful People of Turkey. Maybe if I attached a .wav file of me singing "Sail On" it would help. Or maybe not.

Once you're on the site, there's a little window where random comments by existing members go by, accompanied by a thumbnail photo. I clicked on the first one that went by after I noticed it scrolling and it was a guy who looked kinda like an old version of Heath Ledger. He had a shaved head, a fake tan and he was wearing a suit jacket with no shirt underneath. Presumably, he believes he has found the loophole to get into those "jacket required" restaurants, and yet still be able to show off his abs. I think he got confused and he really meant to sign up for ridiculousdouchebags.com.

In another six hours, I'll lose my access, and go back to being just a regular Turkish guy with a stupid blog.

Oh well. I guess I'll never be an emo vampire.

*Kumho? That sounds like the battle-cry of the amazon hooker warriors or something