I know, I know, I haven't been around in a while.  I've been doing a lot of not-writing, and what little writing I have been doing has been put to use on a short story that I'm about 3/4 finished with, inspired by a photo taken by my friend Vidna.  No excuse, I know.  But seriously, nothing funny has happened to me lately.  I know it's hard to believe, but it's true. I also think work might have permanently damaged my humor bone.  I wonder if I can get workman's comp for that?

No, not Meatloaf.  Well, OK. Besides Meatloaf. Because nobody can deny that Mr. Loaf kicked some serious ass in his time.

For the last 19 years, the television in my bedroom has been an early 80's 25" RCA made of 100% actual imitation wood. (Not to be confused with the completely inferior imitation imitation wood.)  In other words, this is actual veneer, not stick-on vinyl wood grain.  The remote is the size of a hardcover book and could be used to knock someone unconscious, which really doesn't matter much because it shit the bed a long time ago.  Probably after knocking someone unconscious. Here it is, in all its mulleted 1980's glory: 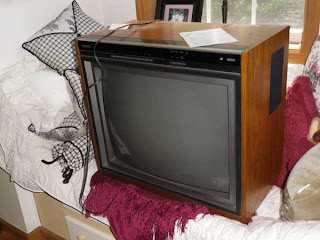 The weird thing is, I don't know what to do with this blocky monstrosity.  I feel kinda bad just throwing it out, because number one, the garbage men will probably shoot their spleens out of their ears getting this advanced piece of 1980's technology into the back of their truck, and number two, it still works fine, and that's pretty impressive for a television that's probably 30 years old.  I don't know much, but I will bet you a month of paychecks that the shiny new Sony Bravia I just replaced it with will be sitting in a landfill sometime between now and the year 2020.

Unfortunately for this TV, it's not old enough to be vintage or kitschy -- it's what most people would probably consider butt-ugly.  The picture is still really good, but it's 4:3 and not even close to HD.  I probably couldn't give it away.  As for the audio -- it's got some new-fangled thing called 'stereo sound' or something, and it sounds really good because it has real 5"x8" speakers on each side of the cabinet.  These speakers, combined with the giant wooden case that holds the tube, will put the built-in sound of any flat screen TV on the market today to shame.

So I moved it from where it was sitting (on top of two stacked footlockers) off to the side about 3 feet onto the window seat.  That was about my limit.  Neither one of us could remember what was inside the footlockers, because the TV had been there so long.  I figured it was probably all leg warmers and Member's Only jackets, but it turned out to be bedspreads.

It doesn't have the charm of my 1949 Motorola and I don't think it ever will, no matter how old it gets: 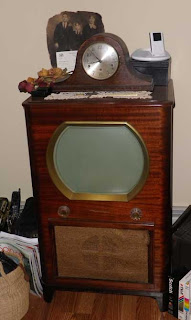 (That's a cool TV right there.  The night I finished restoring it, my wife and I watched Casablanca on it.  You'd be amazed at the amount of low tech crap you need to use to get a new DVD player hooked up to one of these.)

I just recently read that some people like old tube TV's for playing vintage video games.  If you are one of these people, have I got a deal for you.  I'll even throw in a 26" Sony flat screen that weighs even more than this one for free.  All you have to do is pick them up.  And not leave any spleens laying around that I'm going to have to clean up later.

I'm going to try an experiment, and just write a few short blog entries, just to get back into it a little. So I'll apologize up front because they're not going to be funny.  And speaking of not funny, my friend Pootie has entered one of her pictures in a contest.  Check it out if you get a chance.  The site is a little annoying, but give her a vote if you can.

Also, here's something my buddy Trav wrote about me over on his blog.  I'm honored, even if he is a little nuts to think I'm inspiring.

Next up, I drive to a casino and see Bob Seger.  Yeah.  Me and Bob are tight.