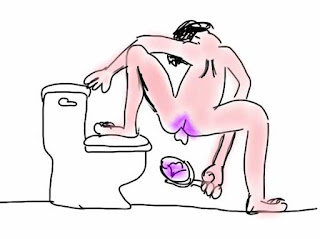 Balls. Of the eye variety.

Back in December, my wife had eye surgery on both her eyes because she had extreme dry eye and some kind of conjunctival lesion that needed to be removed. They pull tissue from another place on your eye under your lid and graft it to the area they cut away. Here's what they did to her. Try not to puke:

When it was done, she couldn't open her eyes. Two days later, she looked like an emo vampire -- her eyes were blood red and she was involuntarily crying all the time.
It's been a long recovery, and while her eyes still bug her a bit, they are looking much better these days. I thought the worst was over -- until I got the bill.
It cost over 10 grand, and luckily a good chunk of it was covered by my insurance. But since we have a fairly high minimum yearly deductible, I'm going to be paying it off until the end of the year at least.
I understand some of the itemized charges, but some of the other line items made me laugh. Apparently eye surgery requires some weird things. For instance, they could be charging us $110 bucks for a pregnancy test and I wouldn't even know it -- oh wait, yes I would because it's itemized right on the bill. Yes, they actually required a pregnancy test before eye surgery. Good thing she wasn't having a pelvic exam -- they probably would have required an eye test. Ridiculous.
Let me share a few of the other items with you. The first one I understand:
Operating Room, 90 minutes -- $3422.00
That's 38 bucks a minute, just to lay there in a room while a light mist of virulent staphylococcus germs settles gently upon you. And this was just to rent the hall - before any surgery actually happens. After the surgery is just more of the same:
Outpatient recovery, 125 minutes -- $545.50
Again, that seems like an assload of money to just lie somewhere watching a 4:3 picture stretched onto a 16:9 TV for two hours. I mean, if your eyes weren't all cut to shit and you could actually see the short fat people on the screen. Why hospitals and doctor's offices can't get the aspect ratio correct on a flat screen, I will never know. Drives me insane.
Eraser Wetfield -- I don't know what this is, but it sounds like the nickname of a hit man you'd hire if you never, ever wanted the body to be found.
Beaver Blades -- No idea on this one. They might have gotten her chart mixed up with someone else. I may have to dispute this charge because as far as I could tell, there were absolutely zero changes to the bikini line.
Esteem -- I never knew you could get this so cheap. $12.88. I should totally load up the next time I'm in the doctor's office. I figure for less than two hundred bucks I could have the ego of Kanye West and Bono combined. I'd be a super-hero in my own mind. I wonder if I'd let myself finish.
Cannula Nasal -- This might be nose oil; I'm not sure. It was only about five bucks, so I guess if it kept her nose from squeaking during the operation, it was worth it.
Drapehead Bar -- I think I got drunk there once in college. I'm not sure what a drape head is, but it sounds like some kind of insult. I think I got billed for it because the doctor had a scotch/rocks right before the operation to calm his nerves and I told him to put it on my tab.
Ondansetron -- On Cupid, on Donder, on Blitzen! I'm pretty sure Dansetron was the gay transformer reindeer who didn't make the final cut to be on the team. Apparently, he now makes hospital visits to cheer up the post-op patients. Too bad he didn't get the Christmas gig and has been reduced to this. You gotta know when not to dance is all I'm saying, Dansetron. It's really your own fault.
Micro spears -- I saw no evidence of a line item for the micro warriors who would presumably be wielding the micro spears, so I'm thinking I got them as a freebie. Kind of like that bag of sour patch kids the cashier missed in my cart last week. I won't tell them if you don't.
Stopcock -- This one was very reasonably priced at $3.63. That's amazingly affordable when you consider that it was completely effective for almost two weeks.
So my advice to you is to double check all your medical bills and make sure you got what you paid for. And if you get charged for Beaver blades, make sure that shit is high and tight. In fact, I recommend checking it before you leave the hospital. Maybe take some before and after pictures just for evidence in case it shows up on your bill later.
Also, don't ever get eye surgery if you can help it. That shit is expensive. And really, really gross.
By Johnny Virgil at 7:00 PM 28 comments: