I'm back from Orlando in mostly one piece. Over there on the right, I'm proud to unveil my very first paid "blog ad" so check it out. They have some pretty cool (and apparently non-girly) merchandise. I'm not sure how they go about the whole testosterone-ladening thing, but I'm probably better off not knowing.

I'll be back as soon as I organize my thoughts and catch up a little. 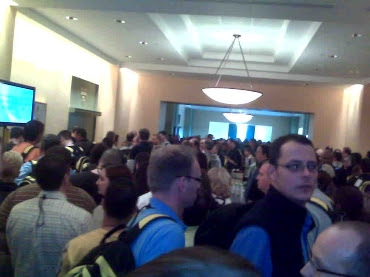 *Or any other "virally-mutated" creatures, like those over at humor-blogs.com.
By Johnny Virgil at 12:20 PM 62 comments:

Best 30 bucks I ever spent.

I think if I were a vet, I'd have to charge a minimum of $15,000 for anything ass-related. I realize I probably wouldn't get much ass-business, but one or two cat butts a year and I'd be on easy street. I really think vets should charge by the relative grossness of the procedure and the size of the animal. For instance, if you have a giant dog with a giant ass problem, that's gonna cost you a lot more, ass-wise, than a ferret's tiny one. That's the price you pay for wanting a pet with a giant ass.

They should also charge by how smelly your animal is overall. If it smells disgusting, there should be a stankification surcharge. They could just have a line item multiplier on the invoice:

Speaking of smelly asses, I'll try to keep you all updated on my Nerdfest 2008 conference. Picture 8,000 sweaty geeks in one giant hotel complex. You'd think they charged extra for the soap and water or something.

It's always good for a laugh or two.

Before Blogger allowed hosting of pictures, I used this place called http://xs.to to store them. It was free, and pretty reliable. When Blogger started hosting them, it was easier and I sort of drifted away from xs.to. Well, I guess they drifted away from me as well, because they just dropped about everything I had stored there from mid-2006 on back.

I am currently going through my posts one by one and replacing the pictures. I cannot tell you how much this sucks, and how much it makes me want to stab them in the neck with my car.

ps - If anyone knows how to get blogger to drop the picture where my friggin' text cursor is, instead of at the top of the post, please let me know before I kill myself. Thank you.
By Johnny Virgil at 5:00 PM 31 comments:

Similar to the character Raven in the book "Snow Crash" by Neal Stephenson, (it's a fantastic book and you should go read it now instead of this post) I am also getting a phrase tattooed on my forehead. Unlike Raven's, my tattoo will be voluntary, and I'll use small letters because I don't have a giant, slab-like forehead. It will say "Attention to detail is limited at best."

Why? Because that had to be my favorite line in my finally-posted blog review over at humor-blogs.com.

Reading parts of this review was like being in first grade all over again.

The report card criticisms were always the same. Johnny doesn't pay attention. Johnny doesn't apply himself. Johnny is always talking to his neighbor. Johnny won't stop touching his crotch. Well, that last one was actually from Miss Welch, my high school French teacher, but you get the idea. Check it out if you get the chance. Most of the comments were great, and Diesel does a fantastic job with the site. Every blog that gets reviewed always seems to get some unfavorable comments. I am pretty sure that these guys are on permanent retainer over there.

In other news, under the guise of "Well, I have to open it to put the batteries in," I played with this for a half hour yesterday. (Don't worry, that link is safe for work. Or is it? You take your chances on this here blog. )

If you are a geek like me, and had a microscope when you were a kid, this thing is pretty amazing. It's supposed to be a gift for my nephew, but I may have to keep it. It would be either really fun or a complete disaster to take it to a party. I haven't decided which yet. I supposed it would depend upon how much everyone had to drink before you broke it out, and how many nerds were in attendance.

After I put the batteries in, I sat down on the floor in front of the television and just swept my hand across the hardwood a few times to gather a little bit of detritus. I discovered some interesting things at 200X magnification. For one thing, I discovered we need to clean the floor way more often. Aside from that, it's an impressive piece of technology for $40. What did I see? Well, there was something that looked like a giant slab of freshly cut fish that turned out to be a tiny section of Christmas tree needle. Something else that was a bright fluorescent blue-green looked be a sand crystal or something that happened to glow in the particular wavelength of the LED light source.

If you get one of these, just don't look too closely at your own skin. It's shiny and wrinkled and has giant telephone poles poking out of it -- and seriously, you won't want to be in it any more.

And that was just from looking at my arm.

ps - I'm currently working on scanning some of my amazing childhood artwork, so stay tuned for that. Let's just say I was not a talented young man.
By Johnny Virgil at 5:08 PM 49 comments:

I always look at tree ornaments. I don't know why. Probably because I have so many different weird ornaments on my own Christmas tree that I like to see if anyone else has stuff like mine. You might remember Just Jack, the ornament I received from Yort last year. That thing freaked me right the hell out.

So long story short, I got looking at our friend's tree at a little house party they hosted on New Year's Eve. They all know I have a blog, so when I started not-so-surreptitiously snapping photos of their ornaments, they pretty much knew what was going to happen.

Let's start with this one: 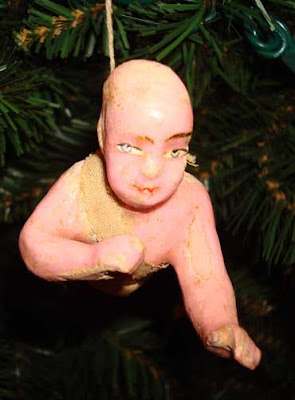 I have nicknamed him Yul, the Hairless Angel. He wears a burlap dress and I believe his wings rotted off ages ago. According to the owner, he is an antique. According to me, he is a tiny Boy George on a string: 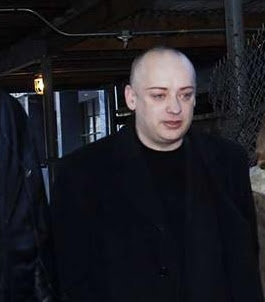 I'm not exactly sure what's going on here: 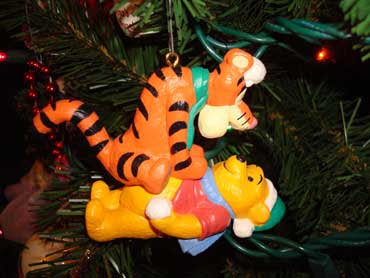 I always figure Pooh for a catcher instead of a pitcher, but come to think of it, he was always getting his stuff stuck in pots and trees and things, so I could be wrong.

This last one freaked me out a little: 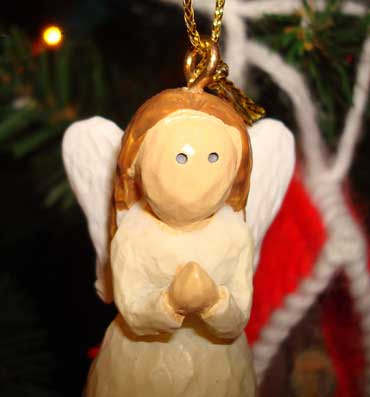 No mouth. No nose. No ears. Fused hands. Empty sockets where the eyes are supposed to be.

If those aren't the ingredients for a guaranteed nightmare, I'm not sure what is. I took more than one picture of it since it was really creepy -- and today, when I uploaded them to the computer, I saw this: 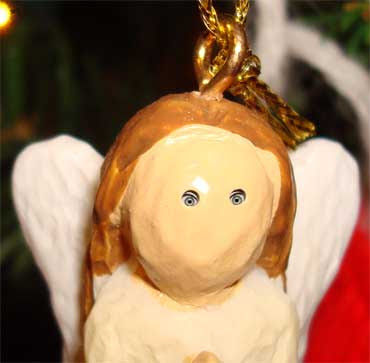 I may never sleep again.

Anyway, Happy New Year and all that. Get on those resolutions, and also check out humor-blogs.com. They have a review page, and supposedly my blog is coming up. If they give me a crappy review, I'll be needing a hacker. So if you know of anybody, send them my way. Thanks.
By Johnny Virgil at 8:09 PM 52 comments: