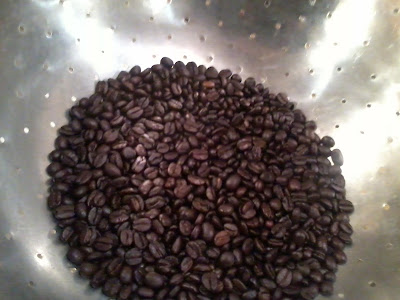 This has to be the ballsiest way ever to commit suicide:
Flesh-eating piranhas kill man in Bolivia
By The Associated Press
Authorities say piranhas attacked and killed a young man who leaped into a river infested with the flesh-eating fish in northeastern Bolivia.
Daniel Cayaya is a police official in the small city of Guayaramerin. He tells The Associated Press that the 18-year-old man was drunk when he jumped out of a canoe in the nearby town of Rosario del Yata, 400 miles north of the capital of La Paz.
Cayaya says the man bled to death after the attack, which occurred last Thursday. First word of the incident emerged Tuesday, when it was reported by the Erbol radio station.
Cayaya says the police suspect suicide because the man was a fisherman in the region who knew the Yata river well.
That's just crazy. It's like deciding to kill yourself by juggling a bunch of hornets nests while dancing a jig on a fire-ant hill.
By Johnny Virgil at 8:14 PM 8 comments:

I probably won't buy these.

They confuse me. Do they give you the crabs? Or take them away? 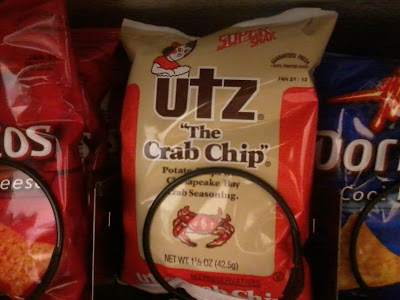 And what's up with the company name? Utz? It sounds like the noise you make when someone hits you in the solar plexus with oh, I don't know, a giant crab, for instance. Come on, snack food machine filler guy, stop being a lazy piece. I know you put shit like this in the machine just so you don't have to fill it as often. Next thing you know, we'll have three different rows of Necco wafers up in there to keep those disgusting Chuckles company. Is there anything more vile in taste and consistency than the black Chuckle? No, there is not.
So let's dispense with The Crab Chip, ok? Bring back the Cheddar SunChips, or the extra crunchy Cheetos. You know, the real food. Crabs and Lobsters are nothing more than nasty looking, underwater bugs. All you people who say you love the taste of lobster and crab -- face it; you just love the taste of melted butter.
Speaking of bugs, did you guys see this thing? Holy shit. My wife would have a stroke if she saw one of these in the house. Also, I wouldn't recommend stomping on it to kill it. I have a feeling it might shoot up your pant leg like a giant mayonnaise packet or something. I mean, I'm not afraid of bugs as a general rule, but that thing eats carrots.*
Whole carrots.
Jesus.
*I did some additional reading and it turns out that some people cook these bugs and eat them. That's just disgusting. But I suppose if you could feed it a carrot, a potato and some celery right before you cook it, you could save some time on Weta stew.
Edit: OK, i bought them today. First they are...not horrible. They are extremely salty, and they remind me a little bit of the old Wise Barbecue chips we used to get when I was a kid. I ate most of the bag, but didn't finish them. Sorry to say, they're not my favorite. I think that honor has to go to: 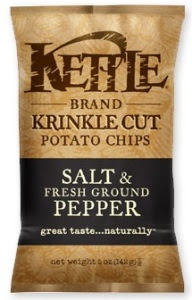