I've been seeing these signs all over lately, and I couldn't figure out what they were: 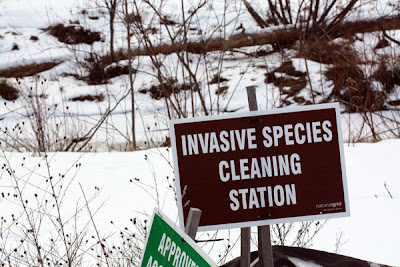 I finally had a minute to look it up on-line and it turns out that the state is now requiring National Grid to clean off power trucks and earth-moving equipment at the end of each power line corridor before taking the show on the road to another area.

Supposedly, this will help to prevent the spread of damaging bugs and other hitchhiking critters from one section of the state to another.

I guess this makes more sense than what I had been picturing: 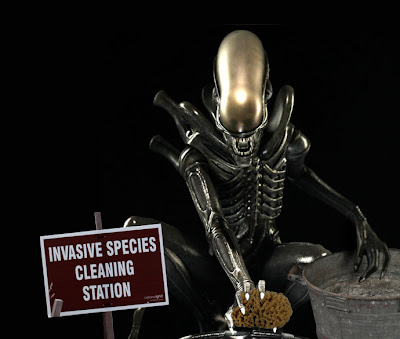 Sometimes it's more fun inside my head.

Happy New Year. Now get out.

Thursday should have been a Monday.  Why? Because I work in IT, all the bad things at my job usually happen on Mondays. That's the first day all the users pound on the system you installed or upgraded over the weekend, and if something is going to fail under load, it fails around Monday at 9am.  It makes for a fun start to the week.  It's also the day that I seem to do more than my fair share of  stupid shit, probably because night guy screwed morning guy and I ended up getting about 4 hours of sleep.

So back to Thursday.  I'm currently in the final stages of installing some new "appliances" - which is a fancy way of saying "servers that won't let you touch the operating system."  They are basically headless computers that sit in refrigerated racks in a secure data center -- headless meaning they have no screens and no keyboards.  Everything you need to do, configuration wise, you can do remotely over the network.

Or at least that's the way it's supposed to happen after the initial installation and setup.  I could go into a long and boring story about how on Monday I copied the configuration from one machine to the other to "save some time," but forgot to edit the file first, and therefore inadvertently copied the ip address of the first machine over top of the second and cut my remote access off at the knees, but for the sake of the non-geeks reading this, I won't. Even though I sort of just did.  Anyway, the short version is I bricked the machine and needed to get into the data center to stand in front of the server with a cable and my laptop and fix my stupid mistake.

I decided the day to do this would be Thursday afternoon, since I had no meetings and I figured it would take me maybe an hour or so, tops.  To get access, there are a few hoops to jump through, so I jumped, filled out all the right request forms, got the secure ID badge -- and at the approved time,  I grabbed my laptop, borrowed some cables and headed in.  I don't particularly like going in there because it's both hot and loud.  It's the noise of thousands of power supply and cabinet fans going full speed, and when you add the rumble of the air conditioning units, it sounds like you're sitting inside of a jet engine.  The server racks are individually air conditioned, but they blast warm air out the back, so the whole place is about 80 degrees.

I found my server and sat down on the floor and jacked into the management port on the back.  About 30 minutes into the job, I realized that the large glass of water I had consumed at lunch was knocking, and I had to pee.  I decided I could just hold it and finish up, because I figured I only had one more setting to change, then a reboot and verification, and that shouldn't take more than about five minutes.  It would take me longer than that just to get through the security labyrinth and out to a bathroom and then back in again, so I just continued working.

At the exact second I entered the reboot command, I thought I heard something.  It took me a moment to make it out, but I finally realized that what I was barely able to hear above the jet-engine noise of the data center server racks was the automated building alarm announcing, "THERE HAS BEEN AN EMERGENCY REPORTED IN THE BUILDING" interspersed with a loud "WHOOOOOOP!" noise, repeating about every five seconds.  All of this, of course, in combination with flashing strobe lights at every exit.

This alarm dictates an immediate emergency evacuation of all personnel.

I thought about just staying put. I really did.  For about five seconds I sat there, thinking, "It's just a scheduled drill. Nobody will miss me."  Then I thought about how it was 20 degrees outside, and they probably wouldn't schedule a system test unless it had been warmer since everyone had to stand outside for 15 or 20 minutes until they sounded the all-clear.  I decided there was maybe a .5 percent chance that it was a real emergency and since I didn't want to die in an exploding fireball of server parts, I stood up and walked toward the exit.  It was then that I realized two things simultaneously -- one, my coat was back at my desk, so this was going to be extremely unpleasant, and two,  I really, REALLY needed to take a piss.

There was no way I was going to stand outside in the cold for 15 minutes with no coat and a full bladder,  so I did what any responsible evacuee would do:  I headed toward the stairwell with the rest of the evacuating throng, and then when nobody was looking, I took a detour into the men's room.

I knew I needed to do my business, wash up and re-join the evacuation as quickly as possible, so suffice to say it was the lightning round, and I was in a hurry.  In the midst of the flashing lights and the noise, (yes, they even have them in the bathrooms) I quickly claimed a station, unbuckled, unbuttoned and unlimbered, then started a marathon piss.  About 10 seconds in, I knew something had gone very wrong.

I looked down and realized that in my haste, I had neglected to sufficiently secure all obstacles from my pee-path.  I was pissing directly onto my shirt tail, which had managed to flop itself down into the danger zone while I wasn't looking.  I know, I know, I shouldn't have looked away, even for a second, because you never know what those things are up to,  but in my defense I was distracted by a siren and a robot voice telling me I was going to die with my crank out.  I pulled my shirt out of the way with my free hand, said a few choice words, and finished up.  In retrospect, dying in a fireball of server parts probably wouldn't have been so bad.  It was infinitely better than dying in a dirty men's room covered in my own pee.

Luckily, since everyone else in the building was in the process of avoiding their own death, there was nobody around to witness what came next.  I waddled over to the sink, holding my shirt away from me, and washed the offending tail as quickly as I could.  This may have been a bad idea.  Now, instead of having about three inches of pee-soaked shirt, I had about six inches of water-soaked shirt.  I gave it a half-assed swipe with a paper towel and tucked it into my pants, along with some fresh paper towels to absorb whatever liquids were left.  Walking like I had a stick up my ass, and glancing down at my crotch every five seconds to make sure there wasn't any inadvertent leakage, I opened the door to the men's room and rejoined the exodus.

Let me tell you, it was damned cold outside.  And of course, the second I stood still, Annoying Guy immediately made eye-contact and started walking in my direction to talk about inane shit like how cold it was outside. Unfortunately I had to be a little rude.  I just pretended I didn't see him and turned and walked in the opposite direction, hoping he wouldn't follow.  Luckily, he didn't.  My crotch was wet and I had no coat, so I wasn't in the mood.

Under the guise of trying to stay warm, I avoided everyone and stood with my back to the crowd, facing the sun and trying not to shiver too much because I was afraid a paper towel would fall out of my pant leg. Fifteen minutes later, we got the all-clear.  Turns out one of the guys working on the HVAC system had set the alarm off by mistake.  We piled back into the building and I went directly back to the data center where nobody would notice me or my wet crotch, and finished getting the server online.  Since it wasn't a Monday, the thing actually worked.  Also, you'll be happy to know, there was no leakage.  I was a little surprised when I found a paper towel in my pants at bedtime, but I probably shouldn't have been.

So now you know the story.  Really, this entire post could have been summed up by a tweet saying, "Hey guys. Sorry if I smelled a little like pee on Thursday."

I'm pretty sure nobody reads blogs anymore, but just in case, I'm glad you still check back once in a while.

Oh, and happy new year!  If you start out by peeing on yourself at work, it can only get better from here, right?

ps - I have been wanting to mention this -- my buddy Dave finally got his book out on the kindle and for a limited time, it's only .99 cents.  Check it out if you're looking for a story about vampires that don't sparkle in the sun and have cool hair.  I did some proofing on an early copy, and I liked the story and learned a ton about Jehovah's Witnesses.  (Yes, they are as creepy as you thought they'd be.)