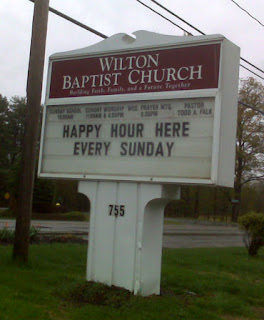 After a particularly rough Saturday night, I was driving to the mall the next day and saw this sign. I decided to stop in for a little hair of the dog to get rid of my headache.

I gotta tell you -- this was the worst bar I've ever been to. It didn't appear to be very popular ("happy hour" notwithstanding) and it didn't take me long to figure out why.

First of all, it was completely dead. I stopped in at around 11:20 am, and I was the only customer. Can you believe it? Not only that, but the jukebox must have been broken because you could have heard a pin drop in this place. I did see a microphone and some sort of keyboard, so I'm thinking they might have live music on Saturday night or something. Probably some old dude playing Billy Joel covers.

I don't know about Friday or Saturday, but there sure was a whole lot of nothing happening when I stopped in. The ambiance was pretty nice, I'll give them that. Lots of candles and low lighting. Probably more appropriate for a fancy restaurant than a bar, though.

I don't think they do much food business from the looks of it. There were a lot of places to sit, but no tables or anything. The bar was way the hell on the other side of the room, and the bartender was nowhere in sight. I walked up to the bar and stood around for a while waiting for him to show up and take my drink order, but after five minutes of that, my headache started getting the better of me. They really need to install a flat screen TV over the bar or something.

The decor was strange, too. The place was clean enough, but there were no stools, which I thought was pretty weird. And get this -- there was a full-sized sculpture of Jim Caviezel fastened to the wall behind the bar. It doesn't get much weirder than that. That guy always creeped me out a little, to be honest. Him and Willem Defoe. I'm not sure why.

At this point, I really needed a drink, so obviously I yelled, "Hey! How 'bout a little service over here?" and picked up some empty cup-type thing and started banging it on the bar. It was a pretty nice one, too. Heavy, and it almost looked like real silver. Most of the time, places that do a happy hour use cheap glasses or plastic cups because people tend to rip off the nice ones.

The banging got the barkeep's attention, let me tell you. He came flying out of the back room like his ass was on fire, and man, was he mad. He was wearing some sort of dress, so I'm not sure what I caught him in the middle of. The whole place smelled like incense and wine, so I guess anything is possible. Thinking about it later, I realized he didn't start to get violent until after I ordered the bloody mary.

Needless to say, I've been banned from this particular establishment.

But at least I have one of their bitchin' cups.