Last night, my wife and I drove about an hour-and-a-half south to beautiful, boarded-up Poughkeepsie, NY to see a concert by Jack's Mannequin -- and so did approximately 1500 mascara plastering, low-rise wearing, effed-up-haired girls between the ages of 13 and 15.

Let's just say there was a shitload of this going on:

I have decided that if you ever have the urge to make yourself feel really old, the most effective way to accomplish this is to attend an 'all-ages' concert where the artist's fan-base consists primarily of girls in their early teens with pink hair and multiple piercings.

The doors opened at 7 pm and we got there about 6:45. The line was crazy -- it stretched all the way around the building for about two blocks. As we trudged to the back, I remarked to my wife about how there was a distinct lack of males standing in line. It had to be a one to 20 male to female ratio, easily. I leaned over and asked my wife, "Do you think it's possible that all these girls have a deep appreciation for brilliantly conceived, perfectly-structured pop songs performed by a young musical genius who has overcome tremendous adversity to practice his craft?"*

We immediately decided the answer was no, they mostly just wanted to dry-hump Andrew Mcmahon's leg. 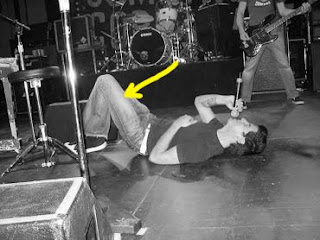 My wife then said that I didn't stand out just because I was old; I stood out because I was the only one there who could grow a beard. I told Booby Mc-Booberson she could just shut it.

As we got closer to the door, we noticed that they were patting people down -- especially the guys. And not that cursory pat-down you normally get, where they run their hands down your sides and around your back and make you open your coat and turn around. There was major cuppage going on here, and you could see the bouncer thinking, "Car keys, cell phone, roll of life-savers, no wait - wow, that's a small penis.... ok, he's clean. Next."

Normally, this wouldn't be an issue, however for years I've carried a folding, clip-on pocket knife, and I rarely leave home without it. It's an automatic thing, like grabbing my car keys and my wallet, so of course I had it with me. I decided to chance it, since we were close enough to the car so that if they gave me a problem I could just run it back. So I unclipped it and slipped it into my front pocket, next to my roll of life-savers.

When we got to the door, the first bouncer checked our IDs (which was hilarious in and of itself) and gave us bracelets so we could drink, and the second bouncer who was doing the frisking took one look at me and just waved me in. Apparently, I'm now too old to be a threat to public safety, what with the osteoporosis and arthritis and what have you.

It was early, but I went to the almost completely empty bar and got a tanq and tonic for me and a coke for my wife, and then we decided where we wanted to stand for the next 5 hours. Most of the parents were up on the second level toward the back. We preferred to make them uncomfortable by standing with their children. We didn't get there early enough to get close to the stage, but we did manage to find some short 13 year olds to stand behind. One of them had a Canon digital camera that would have cost me a month's pay, but she had no clue how to use it. I tried taking a shot or two with my Blackberry but there should be a law against allowing them to call that POS a camera.

In writing this post, I was trying to figure out why he has the fan-base he does. Maybe because his other band is more So-Cal punk rock and he's been on a few festival tours and appeared on younger demographic TV shows like One Tree Hill. Still, other than at a very superficial level, his music doesn't really seem to match up with what's current and popular, at least to me. Even lyrically, the structure and content of the songs is not typical. He has much more in common with Ben Folds than he does with say, Good Charlotte. My wife thinks it might mean that today's youth are cultivating better taste in music and that there might be hope for the future, but I think it's just the whole leg-humping thing.

The show itself was amazing, and Andrew looks energetic and completely recovered. There was one thing I didn't count on, however. It seems that every little girl in the audience knew every word to every song. And they sang them. At top volume. Half the time, I couldn't hear Andrew himself singing because of the crowd. It was like a two-hour Sesame Street sing-a-long. Or a giant chorus of those tiny twin Asian chicks on the half-shell from the old Godzilla movies. Yeah, I know that's a reach, but anyone who has ever seen those creepy little broads will know exactly what I'm talking about. In other words, it was pretty fucking annoying.

A few of the highlights were some new songs from the upcoming CD -- which sound fantastic, by the way -- and an off-the-cuff acoustic version of "Woke up in Car" that he worked up right before the show. The song references Poughkeepsie, NY and he thought it a fitting song to play considering the club's location.

This is the first time in a while we've been to this club. The last time we were there, the "no-smoking in bars" law hadn't yet taken effect, and this club had always been notoriously smoky. If you didn't smoke, you might as well have taken it up because after spending 5 hours in this place, you'd have a 2 pack-a-day habit whether you knew it or not. This time around it was pretty cool. It was very odd to be able to watch a band without your lungs and eyes burning from the smoke. Granted, it was still incredibly hot in the room and there didn't seem to be much oxygen, but at least we didn't feel the need to burn our clothes when we left. Instead of smelling like a dirty ashtray, we just smelled like estrogen and bubble gum.

So even if you are old and dusty like me, I would still recommend seeing him live, with either Jack's Mannequin or Something Corporate. Bring your kids if you have them, borrow a neighbor's kid if you don't (tell them first) or just suck it up and go by yourself. It's definitely a show worth seeing.

*go here to read about his fight with acute lymphoblastic leukemia
By Johnny Virgil at 11:39 AM