Have your roofing way with me.

This hasn't really been a funny week for me. I'm sitting here right now waiting for a roofer to come to my house and screw me. He's getting sloppy seconds because I'm still sore from the heating oil guy who pumped 158 gallons of Texas tea into my tank this morning to the tune of $600 bucks.

If you remember, we had a little bit of sheet-rock damage in the living room and bedrooms due to an ice dam on the front of the house. I finally got around to checking out the back of the house, and it turns out there's nothing good going on there either. Not only did the ice rip the gutter half off the house, it also pulled one of the roof vents off, leaving a neat 6" wide hole that empties directly into our attic space, which isn't something we have access to. Apparently because it was too small for them to put storage up there.

The house is built on a slope, so there's a walk-out basement. That means the roof is 3 stories up. It's also a cape cod style house, so it has a 12/12 pitched roof. That's 45 degrees, for all you non-builders out there (and "really fucking steep" for all you non-degree-knowers out there.) So that's where the screwing comes in. I don't think he's getting up there without being lowered by helicopter. I know, you're all thinking "Is he done bitching yet? His life is sooooo tough. Children are starving in Africa. Hell, they're starving here. "

That's all true. However, this is my blog and no, I'm not done bitching yet, thank you very much.

This next ice issue would be funny if it wasn't such a giant pain in the ass. For some stupid reason, my driveway is higher than my garage. After the ice storm, about 3 feet of snow came down and sat right on top of it. When we got that big thaw, the snow started to melt. When it melted, it ran into the garage, and when it hit the cold cement floor, it refroze. So I have approximately 2-3 inches of ice covering the floor in the garage, and everything is stuck to it. There compressor hoses and extension cords and a hammer that I can see, but can't touch. The ice is crystal clear, so the effect is pretty comical. I keep expecting to walk out there and see a frozen caveman staring up at me. Everything else -- cars, snowblower, generator, lumber, bicycles -- is completely frozen to the floor.

The other day when it was warm out, I opened the garage door hoping to thaw it out a little bit. A while later I walked outside and it was foggy inside the garage. I will be glad when this winter is over and done. The first thing I'm going to do in the spring is make sure that my driveway is no longer higher than my garage floor.

Speaking of being high, I was driving home the other day and saw this sticker: 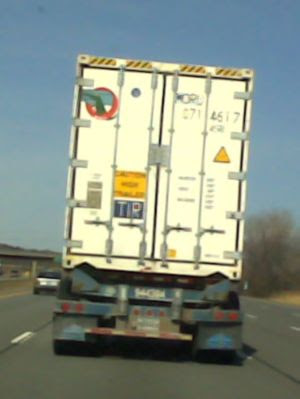 My camera phone sucks, so it's pretty blurry, but it says "CAUTION: HIGH TRAILER"

I didn't think anything of it until I pulled up next to the truck and saw the company logo:

In other car-related news, for the second time in 2 months my car has tried to kill me. The first time, the gas tank was dripping gas onto the exhaust pipe. I could have sploded, y'all. Then last week, I was on my way to an appointment when I heard a noise that sounded like someone hit my car door with a cannon-fired plunger. A few seconds later, I noticed the smell of burning rubber. You don't mistake that smell -- not with my background of abusing vehicles, anyway. Right about the time I thought "WTF was that?" my front tire let out a big gassy fart that sounded like "FWEEEEEEEEEEEP!" and I was suddenly riding on the rim doing about 50mph. I pulled over onto the shoulder and stopped, and got the jack and the spare tire out of the trunk.

At first, when I started jacking up the car, the car stood still and the jack sunk into the ground. I ran across the street and grabbed a flat rock off someone's rock wall. When I took the tire off, I just called and canceled my appointment because the only way my car was going to move from that spot was by use of a tow truck. The front spring had busted, and the break had an edge like a knife. In a few revolutions, it had neatly sliced all the way around the inside sidewall of the tire. This is what it looked like when I took it off: 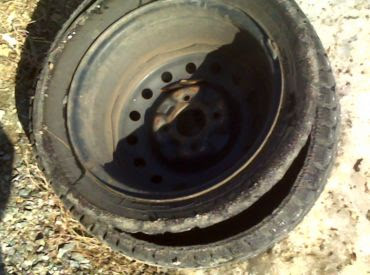 Neat, huh? I didn't want the same thing to happen to the spare, so I called for a tow. While I was on the phone with the woman from the towing company, I realized that I was on a two-lane back road and had no idea what the name of the road was. We played a game of "name the nearest intersection" and I was losing badly. I sounded like a complete idiot. Finally, I asked a random jogger where the hell I was, and armed with that knowledge, I was riding shotgun in the tow truck 30 minutes later.

Sadly, I don't have much else to report. I know this is a weak post, and I promise I'll make it up to you. I'm thinking it's just about time for the sequel to the 1977 JC Penney's catalog. I've been postponing that -- mostly because I want it to be more like the sequel to Alien instead of the sequel to Weekend at Bernie's. I guess we'll see.


Check out humor-blogs.com for funnier stuff than this, and keep me in their good graces.
By Johnny Virgil at 6:58 PM