There goes my neighborhood. Again.

Picture moving out to a nice home in the country, and then, 3 years after you've gotten used to the peace and quiet, you wake up one morning to discover that the pristine field in front of your house is now the site of PhishFest 2008 and covered in filthy hippies, and that's the way it's going to be from then on.

A while back I had a job in a cube farm. I am pretty sure that while I was there, I had fungus growing in my ears. This is because in order to avoid going completely bat-shit insane, I was forced to wear ear-buds and listen to my iPod all day.

There is a universal truth about working in IT. The absolute worst group of people you can sit next to is a group of help desk people. There are many reasons for this. Allow me to list a few of them:

(1) They are on the phone with customers for 8 hours every day. Their phones ring constantly, and every one of them has a different ring-tone assigned to their phone.

(2) Their noise levels do not increase in a linear fashion. To put it another way, 8 help desk people do not make twice the noise of 4. They make at least 3 times more. This ratio holds true regardless of the number of HD people you have. And they are completely immune to the noise.

(3) They have a tendency to have 200 IM messages on their screen at any given time, all of which beep every time the person on the other end hits return -- and,

(4) They all do the same job. That means they are constantly yelling back and forth over their cube walls with their customers on hold.

And I sat 20 feet from the monkey house.

All this would have been tolerable, and I probably would have gotten used to it, except for three individuals. I never actually saw these people, so I drew pictures of how I envisioned them to look based on their behavior. 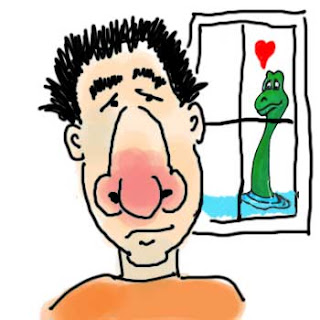 When TNG blew his nose, it sounded like an elephant getting a red-hot poker jammed up his ass. He blew his nose like he was trying to summon the Loch Ness Monster to his cube for a quickie before lunch. He blew his nose like this every 2-3 minutes, all day long. I heard him in between songs on my iPod. I heard him during songs that weren't by Tool. I don't know if he had allergies, or a cold, or if he was just doing too much coke before breakfast -- I didn't give a shit. I just wanted him to learn how to blow his nose like a member of the human race, instead of like some prehistoric plant-eating dinosaur warning the other herbivores that the T-Rex is coming for lunch.

This is Nubbin Girl. 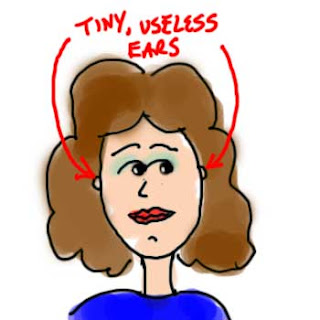 Note the tiny, useless, ornamental skin nubs where her ears are supposed to be. I base this drawing solely on the fact that she always had her IM notification beep set to a completely insane volume, and it beeped non-stop. It was an annoying DOO-DOOP sound that dug tiny but deep furrows in my brain stem. I can only assume Nubbin Girl had it set that way so she could feel the sonic vibrations in her chest and would consequently know that she had an IM. Or perhaps it was so someone else would get fed up with the noise and punch her in the neck so that way she would also know she had an IM.

Lastly, this is No-Nose Guy. 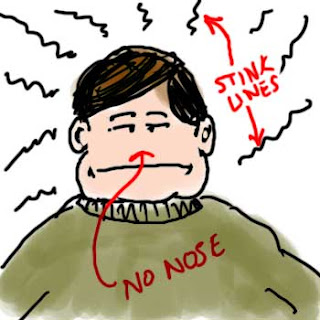 Something over there always smelled like ass, and while I never determined who the offending individual was -- I envisioned him with no nose because he obviously couldn't smell himself. I knew it was a person, because it was intermittent -- but due to proximity, I couldn't seem to catch him. I would be sitting there minding my own business, when the smell would waft past my desk in his wake. By the time I smelled it, he'd already have taken a hard left down cube row and disappeared. This happened a few times a day. Wafting was not my friend.

Today, I got new neighbors at work, and they're help desk people.

Click here for humor-blogs.com -- one of my favorite bad neighborhoods.
By Johnny Virgil at 7:04 PM