OK, maybe this is old news, but I haven't been watching much TV lately. I sat down to lunch and flipped on MythBusters and watched them try to light boats on fire with mirrors. While I was eating my sandwich, I glanced up and saw this on my TV: 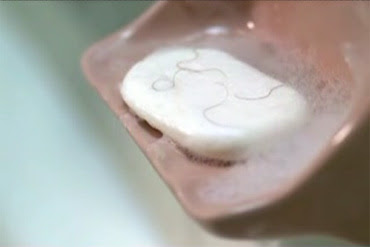 "Did I just see pubes on soap?" I asked myself, mostly because there was nobody else in the room to ask.

I grabbed the remote and hit rewind.

The answer is: Yes. Yes, I did just see pubes on soap.*

I found this hilarious, and disgusting, and there's a lot wrong with that picture up there.

It's an advertisement for Old Spice Body Wash, and they make their point, as far as that goes. What they're not showing you, however, is the corollary to the soap, i.e., the pube-covered loofah, which is how you're usually supposed to apply body wash.

I'm betting it's way tougher to get pubes out of one of those things than it is to wash them off the soap. I'm pretty sure that over time, the pubes will just become part of the loofah, eventually just taking it over until you're basically scrubbing yourself with a 4" ball of curly pubic hair. I'll let you know, since my wife just came home with Irish Spring body wash and I just started using it.

All that aside, if you're living with someone who doesn't wash their own pubes off the soap, then you need to have a discussion. Especially if you're not dating or married to that person. They should dig them off with their fingernails if they have to, because I would rather you have pubes jammed under your nails than be forced go in the shower after you and find something like that picture.

Also, that guy in the commercial? He has another problem they're not showing you. He might be able to get away without touching the soap by using his handy-dandy body wash, but what's he going to do about the fact that the water is up to the middle of his calf because pube-boy left him a little hairy mat down there that's plugging up the drain? You can only move that thing out of the way with your toe so many times, is all I'm saying.

I have to admit, I still feel a little feminine using a loofah. At least I had to use the internet to look up what it was called. Up until today I called it the "scrubber-thing." I think I might go back to that.

Lastly, vote for me dammit. I want to be able to say I won something for once in my life. Also, I would like to prove this anonymous douchebag wrong:

This is the last time I'll be bugging you about that, I promise. I feel like such a whore.

*Which I initially thought would be an awesome name for a punk band. But then I realized that punks generally aren't the most hygienic people on earth, so maybe not.
By Johnny Virgil at 4:26 PM