What's wrong with this?

So today my little Google Desktop tosses up the "What's Hot in the News" list, and it looks like this: 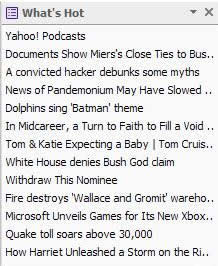 This has to be the worst mix of news and oh-my-god-I-can't-believe-this-is-news I've ever seen. Some of it is valid news and some of it just made me scratch my head and wonder what the hell is wrong with people.

At the beginning, it's not so bad, but as you go down the list it gets worse.

God, there is nothing on this earth I hate more than the 24-hour news cycle. Well, maybe being chased by a wareho, but that's it.