One more vacation story, and I'll be returning you back to your regularly scheduled programming, I promise.

Every night around 4 or 5 pm, a big catamaran that holds about 20 or 30 people would pull up to the dock for the booze cruise. For ten bucks, you got a ninety minute cruise down the coast of the island along with all the rum punch and shots you could drink. The shots were this concoction they called "donkey" which was so named because "if you drink too much, mon, you be makin' de ass of yourself."

Turns out it was just Rum, sugar and lime juice all mixed up and then chilled. It was actually pretty good after the 3rd or 4th one. The rest of the time you were constantly provided with rum punch, which, after the donkey, tasted like watered down grapefruit juice. You didn’t feel it at all. Until you tried to stand up. Alex and Horatio (the crew) did a great job.

Two of these characters were promptly named "mexican girl" and "loud fat guy." Yeah, our nicknames weren't very original, but they were accurate.

Mexican girl was a new bride of two months, and was on vacation to St. Maarten without her husband. No idea what that was about. She was ok at first, then got progressively more annoying as the trip went on. She was polling people as they got off the boat, asking if anyone was "having a party." Not sure what she meant by that, but either way we didn't invite her to dinner.

I never did find out what fat guy's story was. I do know that he liked to have his picture taken with the ladies -- if he could corner them. And ladies, he was quite the catch, let me tell you. 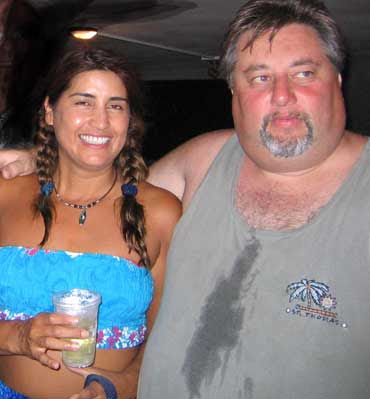 And oh, just to sweeten the pot -- no, he didn't spill a drink on himself. That's pure man-boob cleavage sweat right there.

So anyway, back to St. Bart's. My wife is not a water person. She doesn't swim very well, and she gets motion sick at the drop of a hat, so she doesn't like boats all that much. So obviously she was a little hesitant about the whole booze cruise thing, since it inherently involved both water and boats in motion. Off-setting these two things, of course, was the rum. As alcohol is wont to do, it gave her a false sense of confidence. She did fine, and was pretty happy. Since she had successfully navigated not one but two booze cruises, we all signed up for a trip to St. Bart's later in the week. An hour long cruise each way. She figured it would be a piece of cake after a pair of 90-minute cruises, especially since the boat to St. Bart’s was a lot bigger.

Turns out there's a slight difference between a booze cruise that stays within spitting distance of the shoreline and the open seas the day before a hurricane passes by.

The night before the cruise, we were out extremely late, for reasons I won't get into here, but suffice to say we had about 8 hours sleep -- between the five of us. The next morning at 8:15 sharp, we showed up at the dock, extremely tired and extremely hung over. It was raining, miserable, and very windy. We looked out at the bay and it didn't look too bad. That was good, because we paid fifty-five bucks each for this trip, and didn't want to waste it. They called our names, and we got loaded onto a boat which looked a lot like a shuttlecraft from Star Trek, only it was bigger and smelled more like armpits and feet. Here's a picture of it: 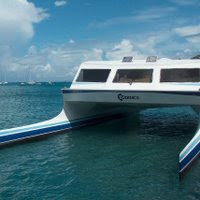 When we got settled in our seats, the captain, an Aussie, gave us the speech -- Passports, trip time, when to be back at the boat, etc. He then introduced the two dudes who were going to be serving us drinks and taking care of us on the way over. Then he casually mentioned that we'd be traveling into the wind, and that there "might be a little bouncy-bounce."

I should have remembered those damned Foster's commercials.

Or even the "THIS is a knife" scene from the Crocodile Dundee movie.

That should have been our cue to bolt for the dock and kiss our buck-ten goodbye.

None of that occured to me until later. Like I said, I was way hung over, so I was barely registering what he was saying. Plus I was keeping one eye on my wife, to make sure the boat swaying next to the dock wasn't getting to her.

When the guy serving drinks asked me what I wanted, I told him water. Instead of a plastic bottle, he gave me a plastic cup full of water and ice.

Then we started moving.

As soon as we hit the open sea, I knew we were in trouble. When we cleared the bay, we immediately rode up the side of a twelve-foot swell, and slammed down hard. My ass did the same, and any of you who know me personally know that I don't have a lot of padding back there. Those fiberglass seats were hard. When we hit the second swell, the water and ice in my glass literally jumped out of my cup and went flying across the cabin.

I had a seat that allowed me to look directly out the windshield of this boat, and I noticed something I didn’t want to notice. The captain looked a little scared. But he was an Aussie, goddammit, and I saw in his face that he would kill us all before he turned that boat around and admitted defeat. I watched the next wave coming and braced myself as we rode up the side of it and then dove under the next one, the water crashing over the windshield. Everyone in the boat was making sounds like you hear people make on a rollercoaster. Screams, whoops of joy, people clapping their hands. They were having a blast.

There's one thing you have to remember about rollercoasters – the ride lasts, on average, about 1-3 minutes. Needless to say, after 30 minutes of this brutal ass-pounding ride from hell, the whoops of joy were decidedly more subdued -- and starting to sound a lot more like moans of agony. I noticed that the guys that had been handing out drinks were now surreptitiously handing out buckets. The most amazing thing to me was that they were actually able to stand and walk around during this. If I had so much as stood up, I would have immediately rolled to the back of the boat and crashed into the transom like a human boulder. I looked over at my wife to see how she was doing. She was doing pretty good. Those booze cruises had been excellent training for this trip.

For your enjoyment, I drew this picture of what she looked like: 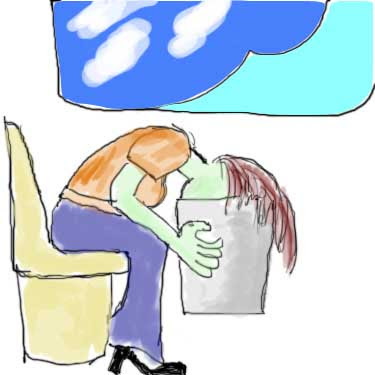 She stayed like this for the entire hour we were on this boat. I wanted to comfort her, to hold her hair back and tell her she would be fine, but two things prevented me from doing this. One, my buddy's girlfriend was already over there sitting next to her and pretty much doing exactly that, and two, I knew if I stopped looking out the front window - even for a second - I’d be joining her on a one way trip to Bucketville. She had her bucket’s-eye view, and there wasn’t much I could do except clamp onto her hand from across the table and try not to catch a whiff that would put me over the edge.

The bucket boys also had this green camphor/menthol stuff that they would pour into a paper towel and give to people, telling them to smell it. They got to where we were sitting, and as the bucketboy was pouring this stuff onto the paper towel, we hit a gigantic wave and about half the bottle of green stuff dumped on my buddy Pete's lap. About a minute later, I noticed him fidgeting around pretty good. Turns out that camphor and menthol are the two major ingredients in Ben Gay, so enjoy that visual. He told me later that it felt like his nads were on fire.

Out of the 20 or so people who were on the boat, about half of them got sick. Another ten minutes and I would have been there right with them.

Talk about a wasted trip.

We took about 2 hours sitting on the steps of a storefront to get our stomachs settled, and then walked around for about an hour before it started pouring. We ducked out of the storm and sat in an open-air French bistro for what seemed like 3 solid weeks, nursing a club sandwich and ice water, and talking to a professional soccer player and his wife, who were really great people.

St. Bart’s is a pretty small island, and a lot of us didn't rent cars, so we kept running into people who we had come over with. They were all obsessing about having to get back on the hellboat in 3 hours. We seriously considered flying back. My wife’s other suggestion was to just stay on the island permanently and start our lives over.

We did eventually take the boat back, and it wasn’t all that bad. We were going with the wind this time, and the captain did a lot of surfing. Without all the ass pounding, it seemed a lot less sickening.

After staggering to our room and taking a 2 hour nap, we awoke feeling almost human, and went out to get some food.

We didn’t drink quite as much at dinner that night. My wife did find some nice artwork in the bathroom of the restaurant though: 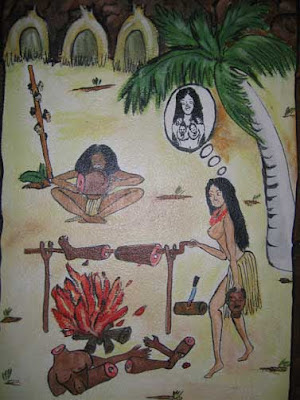 Too bad she didn't see it until after we ate, or I would probably have ordered the steak and ribs combo. They looked good.
By Johnny Virgil at 9:33 PM