If a log falls in the forest and no one hears it..

I guess it's not camping season unless I find something disgusting in the woods. In the past, I've found some pretty diverse things, and this time out was no exception. Before that story, though, I have to mention something I thought was sort of cool.

Two weekends ago, when we pulled up to the parking area at one of our favorite places to canoe, it was very crowded -- perhaps the most cars I've ever seen in the parking lot. The lake itself has perhaps 8 or 9 campsites in total, and we figured our chances of getting one of our favorites was pretty slim. We were right. We were a bit worried, because it was a Friday morning, and our friends Vidna and Pootie were meeting up with us the next day. We were beginning to think we'd be waiting for them in our car because as we paddled the length of the east side of the lake, it appeared that every site was taken. Finally, as we reached the end of the lake and turned to continue our search up the opposite shore, we saw one that looked unoccupied, so we paddled in for a closer look. It was empty, and we moved in immediately. Even though it wasn't great, it was a site and that's all that mattered.

At first I didn't think I had ever camped there before, but after a bit of exploration I realized something. This particular site was only about 200 feet from the trail, and back in college, my best friend Paul and I had camped there before either of us had a canoe. It was the only remote site on the lake that you could actually hike to. It was kind of cool to be back after all that time, and to be visiting that site with Vidna, who had been as close to Paul as I had. So call it fate or my crappy memory, but either way it was sort of fitting that our first camping trip together with Vidna and his wife ended up being here.

This past weekend, however, it was just my wife and I, and we decided to go to the same lake and see if we could grab one of our favorite sites instead. When we pulled up, there were only two cars in the parking lot, and the lake was pretty much deserted. We paddled out on water that was glass smooth, the sky a brilliant blue: 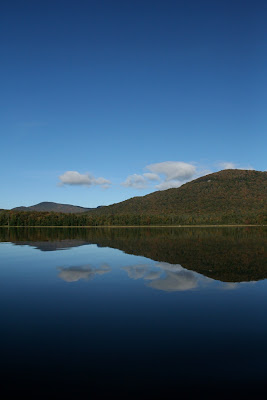 So yeah, it was pretty gorgeous. We paddled to our favorite site, and it was unoccupied. We jumped out of the canoe and unloaded the packs. The site was in decent shape, other than some cigarette butts here and there and a bit of garbage in the fire pit. All in all, not too bad.

In fact, I posted about this particular site last year. For those who don't want to re-read old stuff, just suffice to say there's no outhouse on this site, and the results of that are sometimes not pretty. In fact, it's generally why my wife's camping diet consists entirely of cheddar cheese and Immodium AD.

Of course, after unloading the canoe, the first thing I wanted to do was check the surroundings for any hidden disgustingness, and perhaps take a walk over to the super duper grouper pooper to see if it was still there. Unfortunately for us, it was. It was piled a little higher and a little deeper, but was essentially unchanged. And by unchanged, I mean just as disgusting. I shoveled some additional leaves on it, and headed back to the camp site. On the way back, I noticed something else tucked away in a corner of the woods.

What hidden treasure did I stumble upon, you ask?

Since a picture is worth a thousand words, I will show you this little gem from the brain trust: 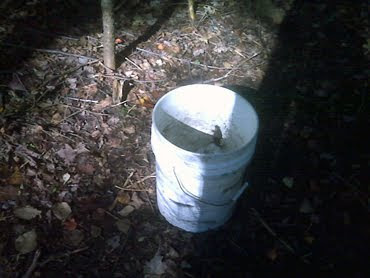 A 5-gallon bucket of shit.

So what's the thought process here? I'm not sure, but I took a stab at it:

"Well....there's no bathrooms at this lake, so I could do one of two things. One, I could bring this trowel or maybe pick up a camping shovel for ten bucks. OR....I could bring this 5 gallon pail. On the down side, it's way bigger than a trowel, and it'll stink and draw flies, but on the up side, I can shit in that all week and then just leave it behind for someone else to deal with. Eventually, it'll just fill up with rainwater and the soup will overflow, but by then I'll be back to throwing lit cigarette butts out of my truck window and leaving empty twelve packs on the side of the road, so I won't give a fuck. Yeah, I'll just do that."

Was this the auxiliary back up crapper? The ladies room? What? I didn't know, and I didn't want to know. I just shook my head, called the person an idiot, wished them painful hemorrhoids, held my breath, and filled up the bucket with leaves and dirt. Unbelievable.

Later that night, after the wind died down, we started the fire. It was a beautiful night, and we were one of perhaps three groups on the lake. Unfortunately, the couple across the lake had decided that what the wilderness desperately needed was a radio, and they were there to help.

At first, we were treated to a medley of oldies and then a few hours later it finally it settled down to some Japanese flute music, which, under other circumstances, I would have enjoyed. We figured they'd run out of stupid eventually, but it didn't happen.

Unfortunately, when you're out in the middle of nowhere trying to get away from it all and enjoy the silence and maybe hear a loon or two, it's still annoying. Although as I mentioned to my wife, it was probably preferable to listening to them screwing from across the lake, which is what I assume the music was meant to mask. Either that, or someone told them that hungry bears especially disliked Japanese flute.

At one point there was a shotgun blast that echoed across the lake for about 5 minutes. My wife just looked at me and said, "You're kidding me, right?" I said, "Well, look on the bright side. Maybe one of the idiots hates flute music and shot the other idiot." We didn't hear any return fire, though, and the music didn't stop, so I'm thinking the one who liked the flute music was just making sure the other one didn't mess with the CD player.

At one point, I wandered down to the shore and it felt like I was in a ninja movie and I had my own sound track. So I did this, just because I felt like it was required.

After a few more awesome ninja moves, I decided to set up my camera and tripod and take a picture of their fire: 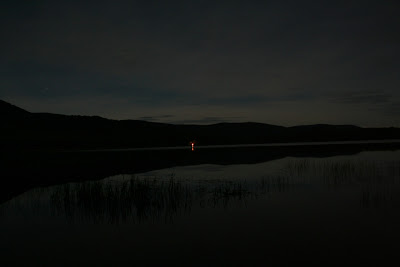 It's kind of pretty in a stark and lonely way. As long as you can keep your imagination from hearing Grace Slick, and picturing people screwing and then wandering off in the dark to shit in a bucket.