If you remember my post from a bit ago about the bullshit with which the esteemed Cyrus Vance Jr. is trying to prop up his career, you know that I carry a small pocket knife, and I have for many, many years. It's a Spyderco, and it has a clip and a thumb hole so you can open it with one hand. Because you can open it with one hand, and because it locks open, a cop in a bad mood could, using this new ruling, confiscate it at best, and haul me away in cuffs at worst.
So I decided I would go to the Spyderco web site and see what else they had to offer. There was a button that said "Legal in NY" so I clicked it. Turns out, they were having a fantastic sale on a particular non-clip, non-locking knife and touted it as legal in the UK, even.
It was a really nice looking knife and *very* cheap. These knives usually start at around $50 and go up from there. So I was very happy to see this incredibly low price. So happy, in fact, that I immediately placed an order for two of them. You can never have too many, right?
They arrived yesterday, and I wanted to share some pictures with you. Here's a shot of the packaging. Very simple, yet elegant. You can see the brushed stainless steel body, the "spyder" logo and the thumb hole for one-handed opening: 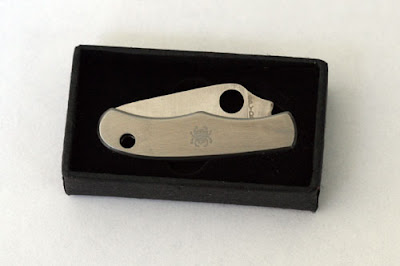 Here's a picture of the knife with the blade opened: 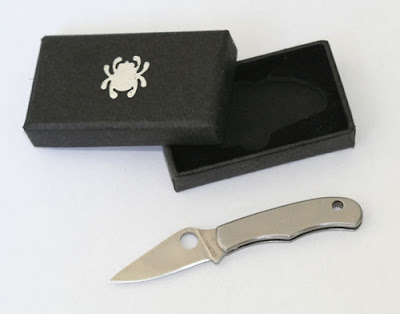 It's razor sharp, and that's no exaggeration. I was able to shave the hair off my arm with it. The spring has a nice amount of resistance to it, so even though it doesn't lock, it turns out it's not a problem.
I would say that in almost all respects, it's a very well made and attractive knife, and exactly what I wanted. I do have one slight problem with it, however, and it's really my own fault.
The problem I have is this: 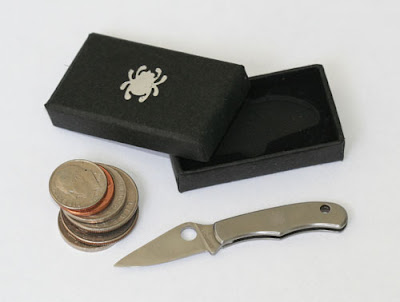 In my defense, nowhere on their website does it say that this particular model is manufactured for leprechauns. 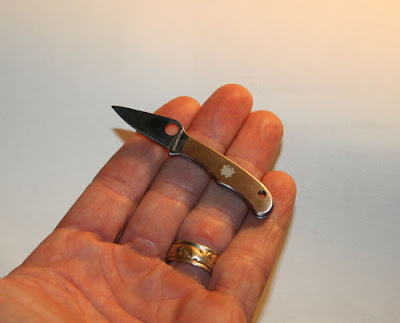 Whoa. My hands are HUGE.
On the bright side, I've learned something from this experience. One, just because it's called a "thumb hole" doesn't mean it's an actual hole for your actual thumb, unless you are a tiny mythical being with proportionally tiny mythical thumbs. Two, determining relative scale and reading the fine-print can be important, and might save you money. And three, apparently size does matter.
My wife is such a liar.
By Johnny Virgil at 6:00 PM