I may never eat another potato.

You know that plastic drawer in the bottom of your fridge? The one General Electric calls "The Crisper" and the one my wife and I call "The Rotter?" Yeah, that one. My advice to you is to never, ever go in there for any reason whatsoever.

I wanted a baked potato to go with my dinner the other day, and so I yelled upstairs to my wife (who knows the location of All Things in the house), "Hey, do we have any potatoes?" She yelled down, "I think there's a few in the rotter."

So I looked, and she was sort of right. There was one potato left. After seeing it, however, I firmly believe that we originally had more. My theory is that some time in the past week or so, each one had expertly planned and executed its escape. I base this theory on the fact that this last one appeared very close to making a run for it: 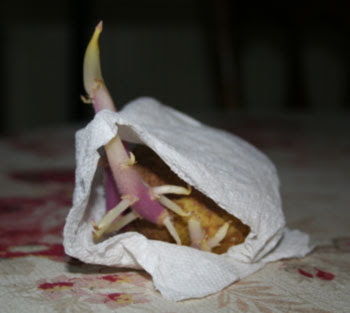 I think they were using the paper towels to disguise themselves.