Of Lumps and Monkeys.

It was an interesting couple of weeks, and I'm glad to say I can share some good news with you. It appears that I'm going to be around for a while longer, which is very good news for me, if not for my Arch Nemesi. What can you do -- you can't please everybody all of the time.

I had a bit of a health scare last week. This resulted in me learning way too much about the things in your throat and what can go wrong with them. You would not believe all of the nasty possibilities. Here's some unsolicited advice for you - never search Google for these terms: throat, bone, bump, lump, larynx, esophagus, Adam's apple, lymph nodes. If you do, you will be utterly convinced you are going to die within 6 months, and then you will freak out a little bit and rent the movie "The Bucket List" before you realize you don't have the money to actually do any of that stuff because you aren't Morgan Freeman or Jack Nicholson.

Long story short, I ended up in my GP's office getting my neck felt up. Being the ever-cautious fellow that he is, he sent me for a CAT-Scan of my head and neck, and set me up with an ENT specialist, which did nothing to allay my fears. Since the appointment was the day after the scan, they gave me a CD of the scan results to bring with me, which meant I had approximately 14 hours to become an expert at reading CAT scans, which is nowhere near as easy as it sounds.

Even though I was easily able to locate the area in question, and learn a lot about bone density, contrast dyes and all 257 slices of my own head, I lacked other potentially useful things such as a medical degree and any clue as to what the fuck I was looking for. I saw some lumps and bumps of bone that I couldn't interpret, then I went to bed and slept like a stone, by which I mean a stone that happened to be sleeping in a clothes dryer for 8 hours.

The next morning, I sat in a waiting room with my wife, listening to people talking through holes in their throats that were far south of where their mouths were, which also did nothing to calm our respective nerves.

The doctor was great -- he showed me the CAT-Scan and how to interpret what was there, and then said the magic words: It's nothing to worry about. I think we both wanted to kiss him. I don't know about my wife, but I was totally going to use tongue. Basically it came down to me having a slightly irregular hyoid bone, which is something that, until two weeks ago, I never knew resided in my neck. After doing the research however, I discovered that it's the only bone in your body that isn't connected to any other bone, and it helps provide structure to your breathing tube and anchors your tongue. Go figure.

We have a dear friend who is currently fighting breast cancer, and I can't even imagine how hard it is to face down something like that every morning. I only had to think about it for a week or so, and the experience was eye-opening enough for me to see how truly brave she and others like her are. (If you pray to a god, or even if you don't, please send her some positive vibes.)

The down side of this whole thing was being scared out of my mind for a week. The upside was a slap to the side of the head that reminded me of what's really important. I suddenly had a fresh, new appreciation of my life and everything and everyone in it. Call me crazy, but I'm going to try to hang on to that feeling for as long as I can.

There was another upside of course, and that was I got to see some pretty wild pictures of what my head would look like if you brought it to the local deli and sliced it up with a meat saw. Let me tell you, there are parts of my skull that would keep Marilyn Manson awake at night. If I ever start a Death Metal band, I'm going to use this particular slice and call my band HYOID. 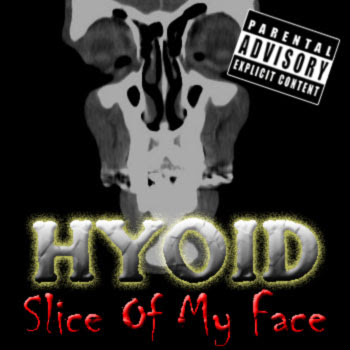 In other news, I finally have a new roof on my house, courtesy of four drunk monkeys with nail guns. OK, they weren't really drunk monkeys, but that visual is funnier than if I just said "guys." Seriously, just once in my life, I would like to have contractors at the house that I didn't want to immediately kill and bury in the backyard. If I ever get laid off from my job, I think I'm going to become a general contractor. I will differentiate myself from the others in this business by (a) doing what I say I'm going to do, (b) doing it when I say I'm going to do it, (c) doing it for the price I initially agreed to, and (d) severely limiting customer exposure to my ass-crack. I am pretty sure I will retire a wealthy man.

I think my main problem with contractors is that I know how things are supposed to be done, even though I've never done them. Unfortunately for me, I know the difference between shoddy workmanship and a good, solid mastery of a skill-set. Also unfortunately for me, I am not always able to pay top-dollar for good, solid mastery of a skill set. Perhaps I have an inflated sense of my own abilities, but I am pretty sure that, given enough time, I could have done a much better job than they did, even considering the fact that it would have been my first time.

Luckily, I was able to work from home for a few days so I could keep an eye on their progress and say things like "Hey, you're going to have to rip off the first 3 feet of shingles and redo them because you forgot to peel the backing off the ice-and-water shield." Or: "Did you happen to notice that the line of shingles that form the transition between the front porch and the main house roof looks like it was nailed down by a drunk monkey?"

So they ripped that out and did it over, too. Sigh. Thousands of dollars later, I have very little confidence this roof isn't going to leak come spring, but I guess we'll see. At least they're gone now and temporarily out of my life. He signed a 5-year warranty against leaks, which I realize means almost nothing, especially coming from a contractor.

On the plus side, I know where he lives and I have plenty of room left in my back yard. Anyone want to help me dig? You can even toss in a contractor or two of your own if you need to free up some space in your freezer. Seriously, I don't mind.

Feed my self-esteem at humor-blogs.com.

Update! Warranty claim number one: It's been raining all day, and I now have water dripping from my soffit onto my porch. I have a feeling this isn't going to end well.
By Johnny Virgil at 7:36 PM