Why buy the cow?

I was on the way home from work Friday, and I needed to stop for milk because we were almost out. Miraculously, what do I see in front of me? A deal too good to pass up: 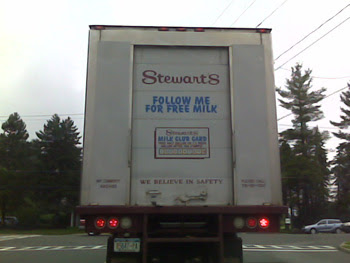 I check my schedule, and it turns out that I have nothing planned. I decide to follow this purveyor of free cow juice and score me a 1/2 gallon for later. Maybe even a gallon -- I have no idea what size the driver is giving away today, nor how far I will have to follow him to get it. Even a pint would be good, but only if I have to maybe follow him for a few miles, tops.

About 20 minutes later I realize I am in this for the long haul. He owes me at least a 2-gallon jug. There's a few cars in between us, but I am a pretty good tracker. Plus, he has a giant truck. He finally puts on his blinker to turn in here: 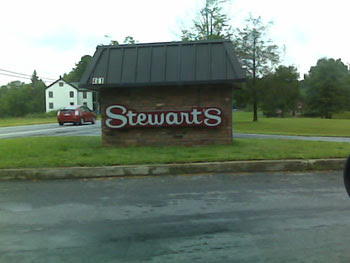 I think he might be pulling over to give away the free milk, so I wait for him to stop. Instead -- even though I'm flashing him with my high beams -- he laughs at me, flips me off and just keeps going.

No, I'm just kidding. I don't think he knew I was after his milk.

I wait for the two cars in front of me to go straight, then I take the same right-hand turn. I stop quickly to snap the above picture, then immediately get stuck at the stop sign and lose sight of him for a few minutes. I continue driving down the lane, and come to this sign: 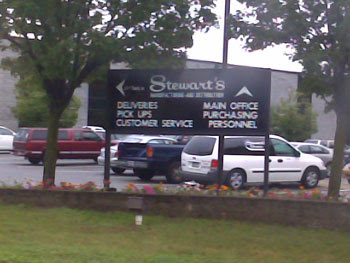 Hmmm. I figure that I need either "pick ups" or "customer service" because I want to take free milk, not deliver it. And "purchasing" is out of the question because this particular milk is free, goddammit. I take the left.

I drive around for a while and find the truck again, but instead of disembarking and giving me my free milk, the driver backs his truck into this thing: 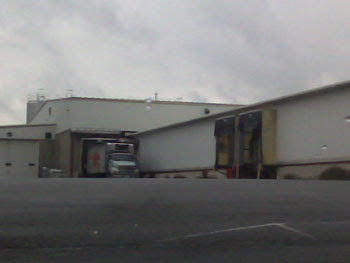 I can only assume that the truck driver is either disgorging his sweet, sweet bounty, or loading up with more milky goodness to give away to all his followers. I seem to be the only one camped on this truck, so I think my odds are pretty good of scoring some milk.

A few minutes later, the truck pulls away and I start following him again, but it's getting late and I really need to get home. I know I need milk, but this is getting ridiculous. I realize it's free and everything, but I'm beginning to think maybe I should just stop at the store and buy a quart. I decide to stick it out a little longer. After about a half hour of driving on back roads, he pulls into the driveway of a small house, with a pretty giant garage: 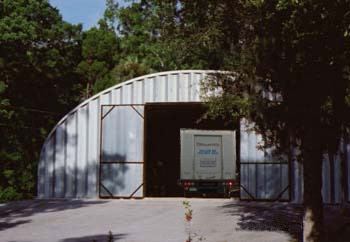 I figure I'll hang around until he leaves the garage, then I'll jump into the back of the truck, get my free milk and head home.

I kill the engine and wait. A few minutes later he drops the garage door and goes into the house. I sneak around the outside of the garage, looking for a way in, but the steel cannister defeats my screwdriver, the only meager B&E tool I have with me. I go back to my car to see what else I can find that might help, but the pickin's are slim since I wasn't planning on this. That'll teach me.

It didn't matter, because even if I had bolt cutters, a drill and an acetylene torch, there was no way I was getting into this dairy products fortress from hell.

A few seconds later, I hear his front door open. He comes out and walks over to a Toyota Celica parked in the driveway, jumps in and pulls away. For a second, I think I should maybe follow him to get my milk, since the sign on the truck said "Follow Me" but I figured that only applied when he was driving the milk truck, so I let him leave. After all, I knew there was milk here -- I was so close I could almost taste it. The guy who drives the milk truck has to have milk, right?

There was only one thing to do. 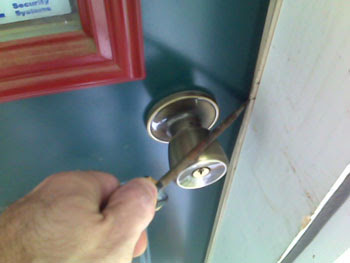 It didn't take me long to find the kitchen, and consequently the fridge. 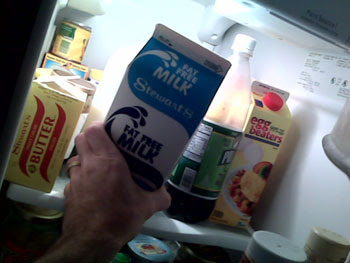 After all that, it was skim. I took it anyway.

I took his butter and egg-beaters too.