I was thumbing through a magazine, and saw an ad for a Munsingwear T-shirt. For some reason, in the ad, they included a tiny replica of an old ad from the same company, which has apparently been selling underwear for over 120 years. It made me laugh, so I decided to share.

Back in the day, when "gay" meant "carefree and happy" the marketing gurus at underwear companies came up with ads like this one: 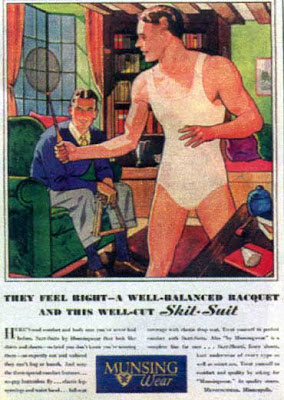 I am betting that the day after this ad came out, the word "gay" was well on its way to its current meaning.

Until this moment I had never heard of a "skit-suit." Judging from the picture, it is very much like having your wife-beater stapled to your tightie-whities.

No matter what year this ad happens to be from, one fact has remained constant: Men should not wear one of these skit-suit things unless they are (1) a trapeze artist in a traveling circus or (2) a professional wrestler. Even then, it's questionable.

There are so many problems with this whole "one-piece underwear" idea that I don't even know where to start. Every time you raised your arms above your head, you'd be giving yourself a wedgie, for one. And unless this thing has a backdoor, I can't even imagine the effort required to take a crap. You would have to get almost completely undressed first.

Now let's get to the meat of the oddness. The two dudes.

Does anyone else find it strange that the one guy is prancing around in his underwear with a badminton racket, getting a chubby over how well-balanced said racket is, while the other one is sitting on the couch, fully clothed, holding the underwear dude's racket frame and acting as if this scene is completely normal?

Sadly, the ad copy is too small to read. I'm sure it's hilarious.

"Say Bob, your racket is so long and perfectly formed. And that shaft -- man, that shaft looks stiff. You're gripping it well, too. I'll bet you could beat the crap out of somebody with that."

"You have no idea, Stan. But this racket, in all its awesomeness, is nothing compared to the glorious wonder that is my well-cut skit-suit."

"I can see that -- I really can. Hey, is that the new comfort pouch? I have to tell you, you fill it out nicely."

"Why thank you, Stan. I appreciate that. Say, you want to have sex before the big match?"

I'm betting it was something along those lines.