Note: For those of you who know me personally, think of this blog entry as being written by someone else. We'll all be better off.

When I got rid of my stupid “whole life” insurance policy, and switched to a term life policy, I decided it was time to start getting an annual physical. Way back in June, I scheduled one for some time in November. The doc's office called me in early November and cancelled it on me, because it turned out the doc wasn’t going to be in the office that day after all. The only time they could reschedule it for was Feb 14, the National Day of Love. I accepted it, thinking that it would get me out of work on time, and it would allow me to swing by the drugstore and pick out a nice card, assuming that I was going to procrastinate the way that I usually do with holidays of every sort.

That was then. This is yesterday.

So I get to the doctors office, and the nice lady weighs me, takes my temperature, checks my blood pressure, makes me pee in a cup, sucks a couple vials of blood out of my arm and brings me to an examination room to wait for the doctor. She tells me to strip down and put on the examination gown, with the opening to the back, please.

I look where she’s pointing, and all I see is something that looks like a disposable paper tablecloth at an all-you-can-eat lobster shack.

I ask her if that was the “gown” and she says yes, everything is disposable now. I joke that maybe after my examination is over, I can take it with me to clean my car windows, but she is all business. "Just unfold it and put it on," she repeats, and then leaves the room.

Well, it turns out that it is harder than I thought. I get undressed and pick up the tablecloth. I unfold it, put it on, and it looks like this: 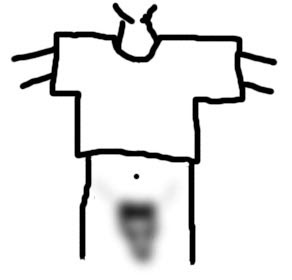 Clearly, something is wrong. I take it off again, and figure out that it is so thin, I hadn’t unfolded it all the way. I finally get it on the right way, and I look like I am wearing a sandwich board on a NYC street corner, except that the front of the sign is blank, and the back of the sign is my ass.

I sit down in the chair to await the arrival of my doctor. The moment I sit, the paper gown splits from my knee to my crotch, and now it’s covering nothing at all, front or back. I am about a second away from just wadding the whole piece of shit up and sitting there in my undies, but no, the nurse said to wear the gown, so I am going to wear it, goddammit. A few minutes later, the doctor walks in, shakes my hand, and starts laughing because this paper gown is just hanging completely off me. I say, “Yeah, I know. I’m a slut.”

He has a folder as thick a telephone book, and it turns out it’s my complete medical history according to every doctor I’ve ever seen in my entire life. He starts going over it, item by item. After about 20 minutes of this, he whips out the stethoscope, listens all around, and then tests the reflexes. He asks me to lie down on my back on the examination table, so I comply. He then does all the other doctor-like things: pushes on the stomach, looks at the feet, throat, teeth, fingernails -- basically the same things you would do to evaluate some sort of livestock you were going to buy.

I sit up, and he says, “OK, lets check for hernias and what not.”

Be warned. It’s the “what not” part of that sentence you want to watch out for.

I do the turn-the-head-and-cough thing, which is a little awkward and uncomfortable, but expected. I mean, every guy who ever went to public school had to do this bit for gym class pretty much every year, at least where I went to school. On the other hand, we never actually had to get a permission slip or anything, so it quite possibly could have been one of the gym teacher’s pedophile drinking buddies dressed up in a white lab coat and stethoscope. We’ll never know for sure, so it’s best not to dwell on these things.

Now -- my doctor knows I’m into building furniture, and one of his hobbies is also restoring antiques and doing a fair amount of woodworking, so he’s talking about ways to refinish a table, what finish to use on it, whether to spray or brush, etc. etc. All this time, he’s talking, I’m answering, he’s doing his examination, and all is well. The conversation is bouncing around pretty neatly between woodworking topics and medical topics, and I’m only half paying attention, because I really don’t like to talk about woodworking unless it has something to do with chair-making, which is a pretty specialized form of furniture making.

I'm also not talking much because he’s digging around in my crotch area, and if you’ve ever tried to hold a normal conversation with someone you barely know while they are rolling your left testicle around between their fingers like they are testing a plum for ripeness, it’s not as easy as it sounds.

That part catches my ear, so I start paying closer attention. I realize that he's got a tube of something, a fresh pair of latex gloves, and he’s got the jellyfinger. He's motioning for me to turn around.

Now he’s telling me to take a deep breath, and at the same time, talking about his oldest son who is a ski-racer. Trust me. Right then, I did not give the tiniest flying fuck about his kid, his family, his furniture restoration business, his experiences spraying shellac or his boyhood in Vermont – none of it.

My single, all-encompassing thought was:

When you shook his hand, were his fingers big or small? Dammit man, THINK!

He’s STILL talking to me, telling me about how I have to get my wife back on skis, and how it’s a great winter sport, blah, blah, blah, all the while I’m getting probed and prodded. I’m completely amazed. I’m sure he does this every day, but I certainly don’t. This is my first time, and I’m already pretty sure I would prefer respectful silence, or at least some soft music and candles. It’s literally like he’s conversing with someone in the cafeteria, or in line at the bank.

I’m answering him the same way you would talk to a casual acquaintance that you don’t really like if you happened to run into them in the grocery store -- you do the standard thing and feign polite interest while you plan your escape.

I cover them all. The only part of that standard conversation that I couldn’t use was the kicker -- the part that goes, “Hey, It was really good seeing you! I gotta run.”

As conversation closers go, that part is usually way more effective if the person you are talking to doesn’t have their finger jammed in your ass up to their last knuckle. Just so you know in case it ever comes up in the grocery store.

So it’s all over, and he still wants to talk furniture. I’ve got a really bad case of jelly ass, so I’m not interested. I’m nodding, not talking much. Finally he takes the hint, leaves and lets me get dressed.

I pay my bill, and get the hell out of Dodge. I stop at the drugstore on the way home and pick up a Valentine’s day card for my lovely wife. I hadn’t procrastinated as badly as I had feared, since I did manage to pick up her gift the week before.

When I get home, we have a nice dinner, drink some good wine, exchange gifts and then watch a little TV. By that time, it is close to 11:00, and I have to get up at 4:30 for work. Contrary to our romantic plans, we both fall asleep.

It wasn’t until I got thinking about it today that I realized that I got more action at the doctor’s office on my way home from work than I did last night. It was truly a Valentine's Day to remember.