This week we’re visiting the grandparents in West Palm Beach. The condo they live in has a rule that says if you’re not over 55, you can’t live here. Seriously. Even if you inherit the place you have to wait. Most of the current residents beat this limit handily.

There’s a dude here who is 92 years old – just last week he passed his driving test. They make him take it every year now. I’ve driven with this man before. He has glasses an inch thick, and has zero peripheral vision. To look left or right, he has to turn his head a full 90 degrees. He is also Very Italian, which means two things: He talks with his hands, and he has to have eye contact with you while he's talking. But the rear-view mirror doesn't cut it. No eye contact by proxy -- it has to be the real deal. This guy will sometimes forget that he's driving, and turn around and look directly at you while he's speaking.

It is slightly unnerving to say the least. He brought us to the airport once, and we ended up going the wrong way down a one-way road. Luckily it was 6 am and there was only the one tractor trailer coming the other way. I believe I actually screamed “HOLYSHITTHERESAFUCKINGTRUCKCOMINGDIRECTLYATUS!!"
in a car full of old people. I now know first-hand that there is at least one other way besides a "Grande" Starbucks triple-shot espresso to go from half-asleep to wildy, heart-poundingly awake in a matter of seconds.

Normally, (traffic near-misses aside) things move a little slower here. We were in line in CVS today behind a guy who was paying for his entire 34 dollar purchase in quarters. These babies weren’t wrapped, either. I think he had brought them to the store in a sock. Then he didn’t believe the clerk charged him correctly for his purchases, so he had to stand there and go over it with her for an additional five minutes. I know what you're thinking, but this was not your classic crazy homeless person. He was well-dressed, in that singular West Palm Beach old-guy way -- you know, bright pastel polyesters, white belt, no socks, loafers -- although he did have his pants pulled up somewhere north of his armpits, so there was something going on there.

Sometimes I think old folks do stuff like this for laughs. They have nothing else to do, so they jump in their cars at 7 am, run around on the roads going 34 in the fast lane...or they'll do things like head to the drugstore to buy 50-dollar electric razors with their sock change. Then they go back to their old-guy club houses and compare notes with their friends over a mint julep.

I was waiting in the car at another store and a little old lady squeezed her gigantic Cadillac into the tiny spot next to me. She pulled in at full speed, missed my car door by about a millimeter, slammed on the brakes and came to a stop about an inch from the car parked in the spot in front of her. She took a swig of her big gulp, slapped The Club on the wheel, opened her door into the side of the truck parked next to her, jumped down off her telephone book and tottered away. Amazing.

Shopping down here is an experience, especially if Spanish or Haitian aren’t in your official list of languages that you understand fluently. The entire area is pretty surreal. I never saw so many high-rise condos, tin-roof shacks, and multi-million dollar homes so close to each other. There must be 5 pawnshops within a 6 block radius. I suppose when you have that many expensive residences nearby, it's convenient to have an extra-quick place to fence the goods. That way you don't have to carry them so far.

It seems like I never get any sleep while we’re here. We’re sleeping on a pull out sofa bed that is about two inches shorter than I am, and the condo is about a block from the railroad tracks. Starting at about 11pm, a train goes by every hour on the hour all night long. That sounds bad enough, but the streets are arranged like this: 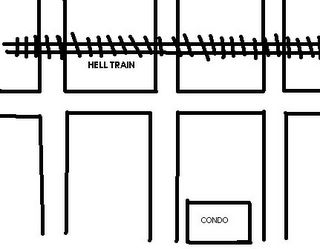 There’s some crazy law here that says the engineer has to blow the train whistle and ring the train bell at EVERY SINGLE FUCKING INTERSECTION. There's about 30 blocks of this, so the clatter starts to fade in slowly, then the horns and the bells start. These get progressively louder, until they seem like they are actually in the room with you, then they fade out again in reverse order. This whole sequence takes about 3 to 7 minutes, depending on how long the damn train is. And because of this, you can't sleep with the windows open. I do not understand why they have the windows OPEN when it's hotter than hell outside, but then close the windows when it finally starts to cool off. And they refuse to turn on the air conditioning under ANY circumstances. It's like a badge of honor or something. Of course, the old folks all take their hearing aids out at 8pm, so they’re good to go.

Speaking of that, after about 3 days of the TV being THIS GODDAMNED LOUD ALL THE TIME, EVERY SECOND OF EVERY GODDAMNED DAY you start go to a little nuts.

I was reading a newspaper article this afternoon about what types of interrogation techniques should be considered "torture." They were talking about a technique that uses sensory overload to break you down and make you spill your guts. The CIA uses sleep deprivation, alternating temperatures, extremely loud noises and bright colors, all bombarding you at the same time in order to weaken your resolve and make you talk. This is apparently not suitable treatment for scumbags who have actually tried to kill our soldiers.

I realized as I was reading the article that sleeping on this sofa bed in the heat and humidity, listening to incessant train whistles combined with Wheel of Fortune cranked at insane decibel levels is eerily similar. The only thing preventing me from spouting fictional military secrets is that the food here is way better.

I actually went to the drugstore today to buy some ear plugs. The only kind they had were the silicone blobs that you use to plug up all available surfaces in your ear, thus blocking out everything – noise, air, water, you name it. The only problem is that they feel really, really disgusting, kind of like you have a cold tongue in each ear. And they stick to your pillow, and your hair. But they allow me to at least get some sleep, although I do keep having weird dreams about brain slugs from outer space. I’m not sure why.