Monday night, Vidna and his wife accompanied us to the orchestra. Not just any orchestra, mind you - but the New Blood orchestra, fronted by none other than Mr. Peter Gabriel.
It was a thoroughly amazing show, and while a little too political in places for my simple tastes, I accept that with Peter. He puts his money and his heart where his mouth is, and there is no doubt that the man has a passion for his work and is still at the top of his game.
I have never had tears in my eyes at a concert before, unless you count that one Click Five concert where I realized I was the oldest person in the audience and was forced to weep silently into my coke because I discovered that they did not, in fact, serve alcohol on the premises. No, these were a different sort of tears.
The first song that really hit me was "Wallflower" - one of my all-time favorites. I always thought it was either about someone in a mental institution, or a song about political prisoners. I guess from what he was saying, it's the latter. I think I got the mental institution idea from the movie "Birdy" for which Peter did the soundtrack. A weirdass movie to be sure, but one worth watching. There was just something about that song and the orchestra backing him... the raw emotion of the song was somehow multiplied ten-fold. If you've never heard it, here's a non-orchestral version. The orchestral arrangement made it truly haunting.
For me, the standout of the concert was the story he told about a yoga retreat he went on with his elderly father. It was a type of yoga where you use the other person's body weight to aid you in your stretching. He said it was the most intimate physical contact he'd had with his dad in years. When the trip was over, he said his father hugged him like he hadn't since he was a small boy.
Then he said, "This next song is a reminder to cherish the time you have with your friends and family, and let them know how much you love them, because you never know how long you're going to have each other." Then he played the song "Father, Son."
Until I heard that yoga story, I never really understood what that song was about -- but now it's brilliantly clear. Those words, combined with the orchestral arrangement and the black and white film of Peter and his dad walking side by side almost had me bawling like a little kid. I kept it together though, because I'm a mean, heartless son-of-a-bitch with no feelings.
That you know of.
Here's a video of that particular song, directed by Anna, his daughter. Go watch it now. I'll wait.
Added bonus -- We almost got to see a drunk chick climb over a row of seats and start a fight with a girl behind her who apparently told her to shut up. The shushing was warranted though, because for some reason the drunk chick had decided that an orchestral concert was the best place to have a loud, personal conversation with her friend. Security finally had to get involved and calm her down. I love people.
Also, this cracked me up. We parked next to this mobile dumpster: 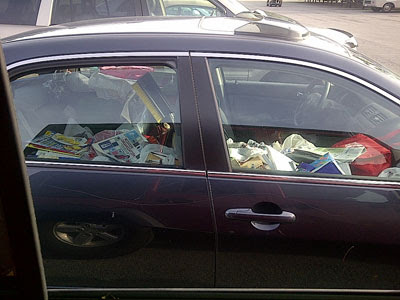 Of course I had to get a picture, because number one, it was disgusting, and number two, I knew you bastards wouldn't believe me when I told you how bad it was unless I had proof. So there you go.
The funny part? When I was converting the picture file for this post, I noticed the name of the magazine floating on the waves of crap: 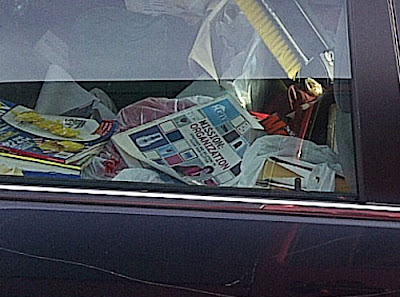 Mission: Fail.
(If that car belongs to anyone reading this -- Sorry. You really are a slob, though.)
Anyway, if you get the chance, go see Peter on this tour. Yeah, it's a little weird, and yeah, you might wonder if you should maybe wear a tux, but one thing is for sure. You won't regret it.
By Johnny Virgil at 7:46 PM