When I was a kid, this was one of my favorite toys: 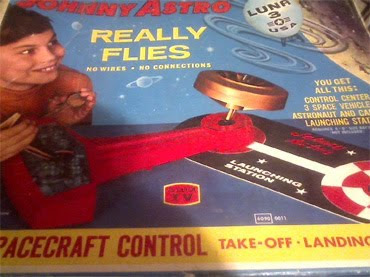 Basically it was a ducted fan with a throttle and a joystick that allowed you to fly a weighted balloon around in a column of air. If you're familiar with the Bernoulli effect, you know how it works. It's basically the same way an airplane gets off the ground.
I know it sounds really boring compared to the toys kids have today, but back then it was almost like magic. You could actually fly it around in circles, out to about five feet, and then by dropping the throttle speed you could bring it back in for a landing. There were two flat "planets" (sold separately) that I didn't have, but really wanted. Somewhere, I have a picture of me playing with this toy. Here's the commercial that suckered me in - hook, line and sinker.
This Christmas, I decided to get myself a little gift, and I have a vintage Johnny Astro on its way to my house as we speak. They were pretty hard to control, but I have faith that if the six-year-old me could get it to fly around, then I'll still have the knack. (I hope it works out better than the japanese flute I bought. I still can't get that thing to make a noise that doesn't sound like geese sex. I'm clearly doing it wrong.)
Thinking about this toy led me on a toy hunt of sorts, and I started googling every toy I had as a kid. The first mechanical toy I have clear memories of playing with was called "Clancy the Great." He was a roller-skating chimpanzee, and he stood almost as high as I did: 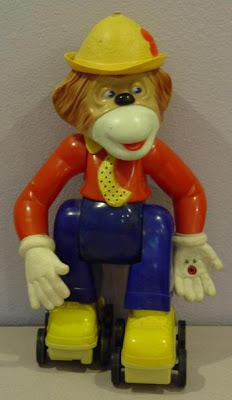 I was probably only two years old at the time, and Clancy scared the living shit out of me. There were two ways to get Clancy to do his thing -- either grab his hand and push a button on his palm, which was supposed to make him skate beside you, or put his hat in his hand and then drop a coin into it, which would close the contact between the two metal studs and start him skating on his own. He had a creepy, sliding gait and his right arm and his head moved back and forth, while his hat arm stood perfectly still.
I'd sneak up on him from behind, throw the coin in his hat and then run away screaming like the hounds of hell were chasing me. I was certain that Clancy was right on my tail. I wouldn't go near him again until he ran into a wall and stopped. It was the best and most horrible toy I had. I wanted him to be my friend so we could do things together, but I was also scared he would kill me in my sleep.
During the day, he looked friendly, but there was something about him at night: 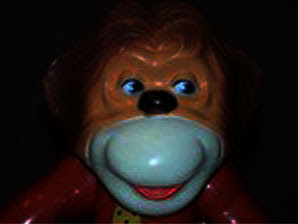 At night, he looked like he knew something you didn't. He'd just stand in the corner of my room, silently staring at me until I made my mother throw a blanket over him. It didn't help.
More toys tomorrow. I have a feeling I'm going to go broke on e-bay.
By Johnny Virgil at 10:30 PM