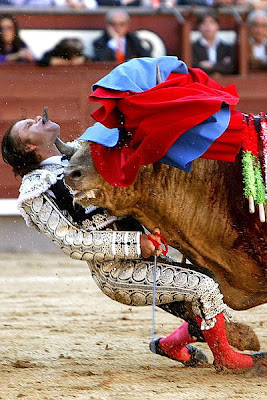 Believe it or not, the guy is supposedly going to be OK, but holeeee shit. When I saw that photo I immediately tried to picture what it would be like to have all MY teeth knocked out -- from the inside. I couldn't do it.
That picture is just...Unbelievable. I learned two things that I did not know before. One, never read the NY Post. Two, the sad thing about this horrible sport is that the bull dies whether he wins or loses, because, well, that's the rules. I call bullshit.
Bullfighting may be a tradition, but it's time to stop the madness. Not only because it's cruel and inhumane to the poor animals, but also so I don't have to see shit like this and feel obligated to pass it on to all of you. Man, that looks painful. Dumb ass. Taunting a giant horned animal like that.
Now that you're awake, and collectively holding your jaws and running your tongues around inside your mouths, let's talk about this: 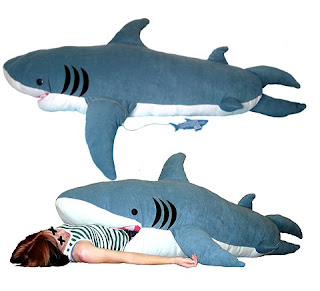 Are you with me here? Are you understanding what it is you are seeing?
Just to clarify: Yes, it is a giant shark sleeping bag.
Why? Well, why not? Who hasn't wanted to fall asleep in the mouth of one of the world's most terrifying predators? I know I have. The designer says she created it in an effort to make sharks more "cuddly" which is really something I never thought about. Usually, when I think about making a shark more of something, it pretty much culminates with "uninterested in me, personally."
The absolute worst thing about this? Well, it's not that it costs two hundred bucks (which includes shipping) although that's pretty bad in its own right. The worst thing has to be the name.
It's called ... The ChumBuddy.
Ignoring for a second the fact that the name sounds like some sort of elaborate masturbatory device designed for men to use while in the library, it's also completely inaccurate.
Here's my detailed analysis as to why: I've always been led to understand that "chum" is what they call the bucket of bloody fish heads that they throw in the water to lure the sharks in.
This would mean that a "ChumBuddy" would be someone who likes to hang out and watch movies with a bucket of bloody fish heads, and I don't think anybody really wants that, so my conclusion stands. Worst name ever.
At first I thought a better name would be something like "Shark Buddy" but then I got thinking that maybe that's still too "cuddly" and she should really name her product something like "Horrific, Urine-soaked Dreams" or "Your Child's Future Therapy Sessions."
The X's over the eyes look like they were photoshopped in there, but I totally think she should sell a sleep mask like that as a ten dollar accessory.
I'm always giving my ideas away. I can't help myself. It's why I'll never be rich.
By Johnny Virgil at 5:02 PM