So as I mentioned in a previous post, I've been looking for some new hiking boots. I don't think my foot size has really changed since I was in high school. I took a 9.5 then and I take a 9.5 now.

I have very stringent boot requirements. They have to give me great ankle support (old snowboarding yard sale injury), they can't be made in China (I modified that requirement - at first I tried "they have to be made in the U.S." but I discovered that we don't make anything here anymore), they have to be comfortable, have almost no heel lift and be made with Norwegian welt construction. A tall order, I know.

The one boot that fits all those requirements is the Merrell Wilderness. Made in Italy, tough enough for some light climbing, comfortable enough for long hikes -- I've had a few pairs of those and they've been great. They can be re-soled, and they aren't too difficult to break in. Lastly, they always fit. The one thing they are not, however, is waterproof.

Oh, they'll say they're waterproof, and they may even be waterproof right out of the box, but they are not waterproof for very long. Even when properly treated, a rainy, messy hike will mean your feet will get soaked.

I wanted another pair to wear when when the weather looked suspect. Something that included that magical material called Gore-Tex. I knew I'd have to give up the Norwegian welt, but I figured it would be a fair trade-off.

As you may already know, I hate shopping. I hate going to stores, I hate being waited on, I hate standing in line to check out, I hate just about everything involved in the entire miserable experience. That being said, you'd be correct in thinking that I am a big fan of ordering stuff online.

Boots, however can be an iffy proposition, because unless you're buying something you've purchased before, you have nothing to go on except for the reviews of others. So began my boot buying odyssey, which has not yet, in fact, ended. Right now there are boots in a box on my kitchen table, waiting to go back from whence they came.

Let me tell you why.

I know you probably don't give a shit, but I'm going to get this off my chest anyway, so what else do you have to do? I suppose you could go watch reruns of old American Idol episodes, but even if I just typed nothing but the word "moist" over and over and over for an hour and then made you read it out loud, it would probably be less annoying than doing that.

Anyway, after reading hundreds of reviews, I decided that these boots might be the ones for me. They had the Gore-tex, they had good reviews, and they were made in Germany. Sure, there were a few discrepancies in the reviews -- some people said they ran big, other people said they ran true to size -- you never know who to believe. I figured worst case, I'd take a shot, order my normal size and hope it worked out.

Here's how I pictured this happening:

To make sure things happened as I wanted them to, I decided I needed to figure out exactly what my shoe size is. I always knew I was a size 9.5, but I never really knew my width. A? B? C? D? E? EE? EEEE? F? G? I had no idea.

"How hard can it be?" I thought to myself. "There are probably hundreds of sites out there with the info I need." The first site I went to told me to trace my feet, then click the "shoe size conversion chart" link. Since I always do what the internet tells me to, I traced my feet onto two pieces of paper, measured toe to heel and side to side, and then clicked on the link. It was dead.

So I had learned three things. One, I have duck feet: 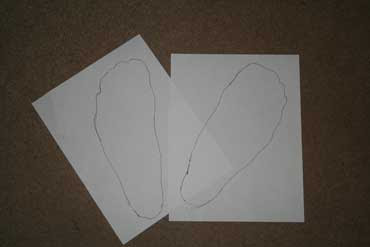 Narrow in the back -- wide in the front, flat on the bottom. They are like triangular paddles on the end of my legs. Two, my right foot is a full half-inch shorter than my left. Three, static web pages suck.

Armed with that knowledge, I headed off to Wikipedia, the knower of all things, and looked up "shoe size."

That's when I started to get confused. It seems that along with religion and politics, nobody in the world can agree upon the best way to size a shoe. It seems that the US, Canada, Europe, Asia and the military all use different systems. Oh, and women's and children's sizes -- also different.

I continue to read. It wasn't all bad. The first thing I saw was that there were three common sizing systems. The first one is used by NATO and other military groups. It's called "Mondopoint." There are length units, and width units. At least that makes sense, right? In a perfect world, you'd walk into a shoe store and if your foot is 10.5" long and 4" wide, you'd say "give me that shoe in a ten-five by four" and you're on your way. But no.

Because Mondopoint is in millimeters and I live in the U.S., I can't convert that into actual inches without a calculator and a lot of time. So it wasn't ideal. Also, I am not in the military, and since nobody else uses it, it was dead to me.

I looked at the U.S. information next.

The calculation for a male shoe size in the USA or Canada is:

Then I had to look up "last length." Apparently, the "last" is the foot-shaped template over which the shoe is manufactured.

Wikipedia told me that the traditional US system is similar to English sizes but "starts counting at one rather than zero, so equivalent sizes are one greater." So one number higher than English shoes. OK. I'm good enough at math to figure that one out.

I started reading about the sizing methods used in the UK. "Shoe size in the UK (English size) is based on the length of the last..."

"... measured in barleycorn starting from the smallest practical size, which is size zero. It is not formally standardised."

Jesus Christ. Barleycorn? Where was I going to get my hands on a barleycorn at 11:30 pm on a Thursday? I don't know about you, but I don't have a barleycorn farmer on speed dial. Plus, it's not even standardized. What would happen if I inadvertently got my hands on some bigass barleycorns?

So it turns out that the barleycorn is a "basic Anglo-Saxon unit, literally the length of a corn of barley."

Wikipedia says that it "goes back to 1066, as the base unit from which the inch was nominally defined. Three barleycorns comprising 1 inch was the legal definition of the inch in many mediæval laws, both of England and Wales, from the 10th century Laws of Hywel Dda to the 1324 definition of the inch enacted by Edward II. Used in current UK shoe measurement."

Used in current UK shoe measurement. Did I just read that?

So apparently the English are currently using a unit of measure from 1066 to size shoes. Currently, as in Today. Right now. Exactly at this second, there's some UK bastard out there lining up his fucking barleycorns.

Then I remembered these boots are made in Germany. I immediately canceled my barleycorn order, and started looking at the Continental European system -- which is used in France, Germany, Italy and Spain.

In this system, the shoe size is the length of the last, "expressed in Paris points."

So it turns out that a Paris point is ⅔ of a centimetre and it has been agreed upon in Germany that the last is the length of the foot plus two centimetres, so to figure out my shoe size, the simple formula is:

At this point, I was done. I just opened the Cabela's website in my browser, ordered my boots in a size 9.5, EE and called it a night. A few days later, they showed up.

I put them on, and they were too big. I'd say by at least three, maybe four barleycorns. I had to crank the laces down, and I still got heel lift.

So I did what I should have done to begin with. I got on the phone with the sales guy at Cabela's, and told him they were a little too big and I was getting some major heel lift.

"Yeah, they do run a little big," he said. "You ordered the wide boot -- the EE width -- is that what you wanted? Most people with normal feet go with D width. If I were you, I'd get the 9 D's. They'll probably fit you perfectly."

So now I need to send the other ones back, and in another week, I'll have a pair that will supposedly fit me like they should.

But I've been saving my poppy seeds, just in case. It turns out that according to modern-day UK math, they go four to a barleycorn, and they're much easier to get.

They're a real pain in the ass to line up, though.