I recently joined FaceBook. I don't know why. One day my buddy Yort asked me, "Are you on Facebook?" and I replied, "No, why?" and he said, "Why not?"

Why not, indeed. I was hesitant at first: I didn't really need another way to waste valuable time that I should be spending on other, more productive things like watching television and surfing the web. It's been interesting getting back in touch with people from my past. There are some bits of Facebook that are kind of goofy, but the overall idea is pretty neat.

The ads though, are something else. The vast majority of them seem to revolve around get-rich-quick schemes, and they alternately creep me out and/or make me laugh at their sheer ridiculousness.

Here are my favorites:

I seriously doubt he makes $1000 a day online. From the picture, I'm guessing he makes ten bucks a day offering hand jobs in the parking garage.

He is not here to make friends, and it's a good thing too, because he looks like a total dick. Regardless of what he says, I don't think he is better than me, even though he also says he makes millions online. My guess? About 5 times a year, he makes $150 a day working as an Andy Samberg impersonator. OK, he still might be better than me.

She wants to hang out at singlesnet, but it's too late. She's already pretty much hanging out everywhere.

"I have four 25-cent ties. Because of this, all the women want me." Totally plausible. 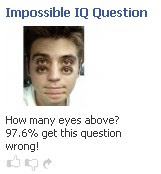 97.6% of what? Blind people? Hamsters? What? And what about that double set of chompers? Apparently, nobody is interested in what percent of something-I-know-not-what is a little skeeved out by that. Why would you click on that ad? I would be afraid of where it would lead me, not to mention the additional damage it might do to my IQ.

He makes more cash than me. In fact, he makes so much money he can afford to go to a car show and get his friend to take his picture while he stands with two booth babes who seriously hate their lives right now. 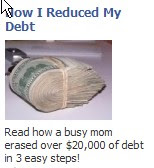 I think I can already tell you the steps involved:

1. Move to a gated, residential community.
2. Have countertop sex with a black drug dealer.
3. Set up a grow house and sell Milfweed.
By Johnny Virgil at 3:33 PM