So my wife had her gallbladder out Tuesday, and aside from the fact that her stomach looks like a really white version of 50 Cent's after he got shot up, she's doing OK. I took the week off to play man-servant, and all I can say is, I wish our house didn't have stairs.

I also wish there was no such thing as cooking shows, because the food network is all that has been on the upstairs TV for the last week. It's gotten so bad, I'm having nightmares about Giada De Laurentiis. In my dream, she looks like this: 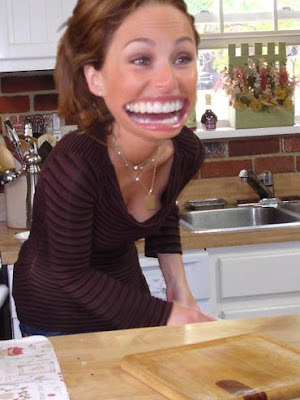 Hmmm. Actually, even out of my dream she pretty much looks like that.

I keep dreaming that I'm a piece of sentient "MOOT-za-RELL-a" and she is going to dip her giant bobble-head down to the counter and take a gigantic bite out of me with her two rows of 149 perfectly white, razor-sharp teeth. Every time she smiles, she looks like she's checking her teeth for poppy seeds in the bathroom mirror.

I don't know if it's just her humongous insane-person grin that bugs me, or the fact that the cameraman sees fit to show us a close up of her uvula every time she speaks, but I can't take this show for very long. Every time she fellat--, er, tastes something she made I expect her to shuck her clothes, jump on the counter and roll around in it while screaming out the names of random italian foods using a fake, over-the-top italian accent.

Here's some other people I've learned to hate over the last week:

Sandra Lee - I forget the name of her show, but I call her Sandra Low because every single time I see her I wonder if her boobs could get any lower without having to be tucked into her pants. Seriously, who dresses this woman? Yank a little harder on those winches, will ya?

Some grey-haired southern butterball - This woman must have solid butter in her arteries, based on some of the recipes I've seen. Don't know her name, or the name of her show. I just know that she bugs the shit out of me, y'all.

Rachel Ray - Despite the fact that she's almost cute in a Miss-Piggy-meets-The-Joker sort of way and she seems to be the most genuine of the bunch, her voice sounds like it belongs to a 50 year old ex-hooker waitress working the nightshift at a truckstop. I can listen to it for about three minutes, tops.

Staying home for the week wasn't all bad though. I did learn how to make home-made chicken soup, using nothing but my own two hands and the instructions that periodically came out of the magic walkie-talkie. Oh, and I used some chicken and stuff. I didn't actually make soup out of my hands. I'm sure it would be tasty and flavorful, but it would make it really hard to type.
By Johnny Virgil at 2:50 PM