Let's get something straight. I don't sail. I've never sailed, never learned how to sail, and never wanted to learn how to sail. In fact, I pretty much hate sailing. My idea of a boat is a canoe that can hold two people and a weekend's worth of gear. Paddle-power, baby. None of that "relying on the wind" crap. That being said, for the last 3 and a half years, I've been building a 19 foot wooden sailboat with my father. It's called a Weekender. He doesn't sail either. "But...why?" I hear you asking. I have asked myself that same question quite a few times over the last few years. This is what it will look like when it's done: 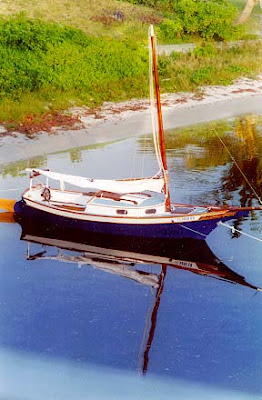 To be fair, he's always wanted to learn to sail -- and he had always wanted to build a boat. When my mother passed away almost five years ago, my father was wrecked -- and a year later, he figured the sailboat was the perfect project to get his mind on other things, move on a little bit, and start living life again. I was drafted early on, because I have a fair amount of woodworking knowledge. Originally, I was going to consult on this job while he built it. Somewhere along the line, I started going over to his shop once or twice a week after work and helping. Oddly enough, the knowledge overlap between woodworking and wooden boat building is small, at best, and I found that I liked learning new techniques that were unique to boat building. So, from a sketchy set of plans, and with a lot of hard work, we formed a sailboat, complete with a 6 foot cabin. It's still a ways from being done, but last Monday, we finished sanding, fiberglassing and painting the bottom. We spent no less than 6 months sanding, fiberglassing, sanding, epoxying, sanding, priming, sanding and painting. The next step is to flip it back over and do the same thing to the top. Hopefully, a lot quicker than we did the bottom. I am so sick of sanding that once this project is over I hope to never see another sheet of sandpaper as long as I live.
A lot of amusing stuff has happened over the course of construction so far, but I'm going to share the most recent incident for your reading pleasure. A lot of it is of the "measure twice, cut once, measure again in disbelief" kind of amusing, which, when you screw up an eighty-five dollar piece of mahogany, isn't all that amusing until much, much later. This one is pretty amusing right from the get go. One of the things we needed to do to this thing is cut a square hole in the back of the boat to allow the rudder steering mechanism to stick out. In order to cut this square hole, I had to start it with a small pilot hole to allow me to get the jigsaw blade in and cut to the outline of the square. As I was about to drill the hole, my father decided that since he wasn't doing much, he would run up to the hardware store, and then over to get us some subs for dinner. He left, and I used a small paddle bit in the hand drill to make the hole. If you've ever used one of these things, you know that if you're not careful, they'll blow out the back and tear it up pretty good once the bit punches through. Especially in plywood. This paddle bit was very dull, so of course I was unable to keep it from blowing out the back. I heard the splintering when the bit broke through, and I said a few choice words. I was pissed, and I jammed my finger into the hole to feel around and see how bad the splintering was. What I didn't know was that the back of the hole looked like this:

You know what happened. Yep. My finger would not come out. Every time I tried to pull it out, the large splinters would close around my finger like a very painful chinese finger trap. I stood up as straight as I could, figuring I'd just reach over the top of the transom and pull the splinters away with my other hand, but quickly realized that my arms weren't long enough. I was stuck, and stuck good. To top it all off, I had to pee. Really bad. And my father was going to be gone for at least a good 45 minutes. There I stood, in the open door to the garage, doing the pee-pee dance with my finger jammed into the back of the boat like I was some sort of nautical proctologist. Right about the time I was trying to figure out how I could sneak a pee into the wet/dry shopvac, my father finally pulled into the driveway. When he got out of the truck with the subs, he headed directly to the house, figuring were were going to eat. When I didn't immediately follow, he said, "What, you're not hungry?" When I didn't answer and instead just stood there looking at him with a stupid expression on my face, he stopped in the driveway. "What the heck are you standing there for?" he asked. "Yeah. I'm stuck to the boat," I replied.
He looked at me with incomprehension. "Did you say you were.....stuck to the boat?" "Yes. That's what I said. I'm stuck to the boat. And I have to pee. Really bad." Once I explained my situation, he did what any red-blooded dad would do in a situation like this.
He laughed so hard I thought he was going to pee himself. He actually had to climb into the boat, lie down on his back and reach one hand into each access port on the inside of the transom to free my mangled finger.  I'll probably never live it down, but I have to say that it was good to see my old man laugh his ass off, even though it was at my expense. I hadn't seen him laugh like that since my mother was alive. Time does heal all wounds. Not completely, and never quickly, but it heals. Apparently, boat-building with your oldest son sometimes helps. When we finally finish it, we're going to name it after my mom. I think we're going to call it "Constant Sun" since my mother's name was Constance and I'm nothing if not her son.
All this time, I've been wondering why the hell I would ever build a sailboat.
Listening to my father's laughter made me think that maybe I have my answer after all.
By Johnny Virgil at 7:56 PM