Random Rants and Aerial Rectal Relief in 30 minutes or less.

This post? Completely random topics that I plan to write about as I think of them.  So to start, I'll have you all know that I'm a lottery winner.  I found a ten dollar bill in my jeans pocket when I put them on this morning, so on the way home from work I sprung for one of those ten dollar "$5000 a week for life" lottery tickets that only an insane person with more money than sense would ever buy.  But even though I knew my odds of winning were slightly worse than my odds of spending a night with a Victoria's Secret model who isn't printed on paper,  I walked into Stewarts and threw my wrinkled ten down on the counter like a boss.

"Give me one of those," I said, pointing confidently to the ticket I wanted.  He tore one off like it was his job, because it is, and took my money.  I left the store, knowing in my heart that I would be retiring by the end of the day.  Then I drove home and stood at the kitchen counter with my coat on and went to town on that lottery ticket with the ass end of a bottle opener.

I took my coat off and danced around a little. OK, no, not really. I just looked at the cat and said, "Hey! I won!" and the cat said absolutely nothing back,  but I could tell he was thinking, "Who gives a shit human, just open the magic can."  I ignored him and brushed the scratch-off crumbs from the counter top (don't tell my wife).  I didn't win $5000 a week for life, but I did hit on five different numbers at ten bucks each, so tomorrow, I'll do the completely rational thing and buy five more tickets because that's the only thing that's gone my way this week, and I want to keep it going.  So wish me luck.

So what else is new?  I have a brand new pet peeve that you should all know about.  It's people who use the word "Ask" as a noun.  Apparently it's all the rage in corporate America these days, and it's infecting every meeting I attend and it makes me want to scoop the offender's eyes out with a melon baller.  Everyone has "an ask" now instead of a requirement or a request or, god forbid, an actual need.  If I hear one more person say, "My ask of you is that...." I'm going to completely lose my shit.  Either that, or I'm going to go all in, and just start using it all the time.

It's a ridiculous thing and it needs to die.

Another pet peeve? It's not acceptable to use texting shorthand and zero punctuation in email or instant chat messages.  Or, when it comes down to it, in an actual text message.  Christ, I have an old iPhone 4s from 2011 and it practically types the entire message for me after I hit the first two letters.

There's no reason I should get a message from someone at work that says, and I quote: "cud u approve ur idm form 4 me?"  Because if that happens, I will respond with, "Sure. As soon as you promise to stop talking to me like you're Prince," which I did. Unfortunately, I think the person I was having this conversation with was about 22 and didn't know who Prince was.  I'm sure she was like, "f u and ur hole wrds gray balls."

So I said this post will be completely random, and I meant it.  Is anyone else sick of hearing about Brian Williams?  If I see one more picture of his smarmy looking face turned into some stupid meme I'm going to be forced to cancel my Facebook account, if that's even possible. I'm pretty sure they won't let you cancel it.  About four years ago, I tried to delete my account and the most I could manage to do was suspend it.  I googled "how to delete your facebook account" and  that night someone slashed my tires and left a note on my windshield that said, 'we no what ur doing. ur next.' I'm pretty sure it was Zuckerberg, but I can't prove it.

Here's my take on Brian. You don't 'misremember' getting your helicopter shot down. What he did was basically the same as me passing a car on the side of the road that had been side-swiped by a tractor trailer an hour before, and was in the process of being winched onto a tow truck, then getting home and telling my wife that I had been in an accident.  So yeah, let it die and let the guy get back to hosting The Daily Show or whatever.

Something else in the news recently -- the FAA has announced some new Drone laws that basically say that (for now) a person has to be within line of sight of any drone they're piloting, and they can't fly higher than 500 feet.  That sort of puts the brakes on Amazon's plan to deliver stuff by drone, which I personally think is the stupidest idea ever.  Drones are cool and all, but I don't want the damned things flying over my house to deliver a jumbo tube of Preparation H to my neighbor because his 'roids are kicking up and he wants it in 30 minutes or less and doesn't want to leave the house.  I mean, I can sympathize to a point -- 'roids are no joke.  But if it means I have to put up with drones flying all over the place, he can walk around with his rectum between his knees for all I care.  Not to mention that those things look dangerous. (Not the 'roids, the drones.)  I'd think it would be worse in a metro area. What if one of these package delivery drones collides with a pigeon or clips the edge of a skyscraper and spins down into a crowd?  Amazon better start making some profit soon because they're going to need it to pay off the lawsuits.

The other flaw in this plan?  There's a lot of people up here in the north country where I live who wouldn't think twice about loading up some drone with a heaping helping of #2 birdshot. They might as well hang a sign from it that says "FREE STUFF!" It's like skeet shooting except with the payoff of a piñata.

Lastly, if you know me, you know I'm fashionally illiterate.  Yes, I just made up a word.  My ask is that you go with it in the spirit of a ranting blog post.  I know nothing about clothes, and I don't really own a suit.  I generally wear Chinese jeans from American Eagle, (the irony!) and some kind of pullover henley or a button-down flannel and call it a day. As long as my clothes are clean, I'm good with it.  I really need to spring for a nice suit soon, because summer is coming and odds are I'll be going to a wedding or a funeral, which are about the only two things I would wear a suit for, preposition be damned.  Although, I suppose if I lost my job for some reason, like choking out someone who had one too many asks, I might need one for an interview.  Either way, it's time to suit up.  What point am I driving at here?  Number one,  I'd like to know why Facebook thinks I am fashion-conscious, and number two, I'd like to know why it keeps putting up ads with links to clothes like this: 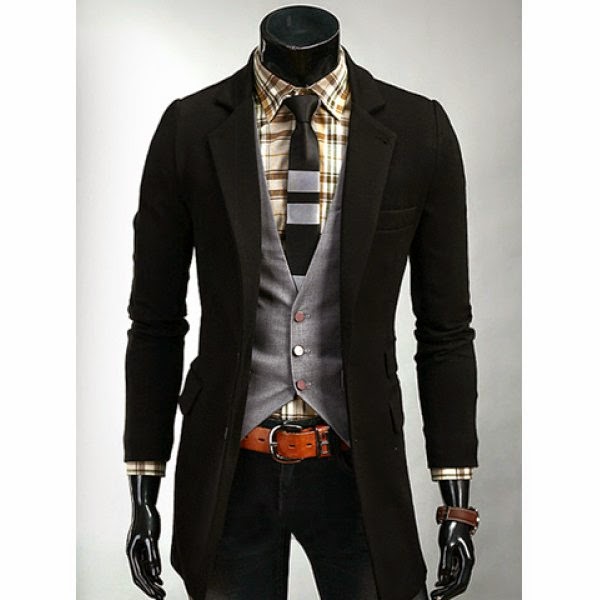 Can you guys see me sitting at work in the cube farm or going to a club or even going out of the house dressed like that?  No?  Me neither.  How about this one? 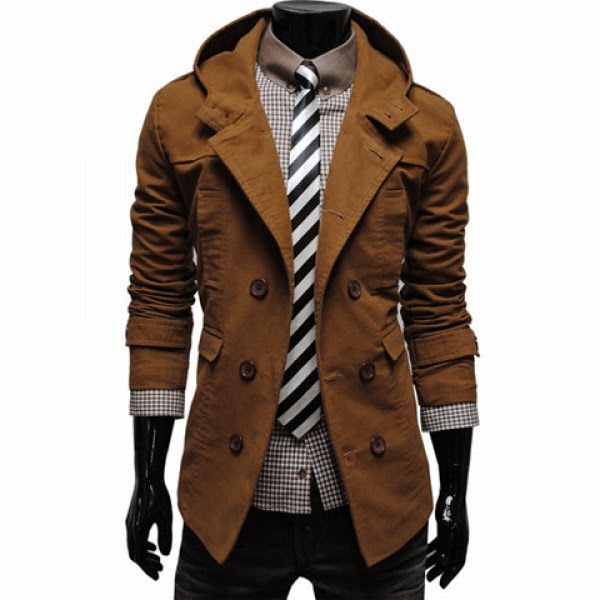 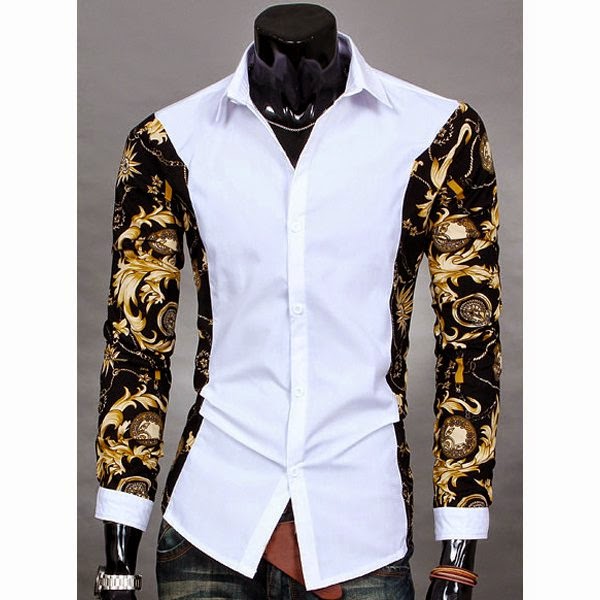 I am actually in the market for a new hoodie, but I think I'll pass on the ermine collar. 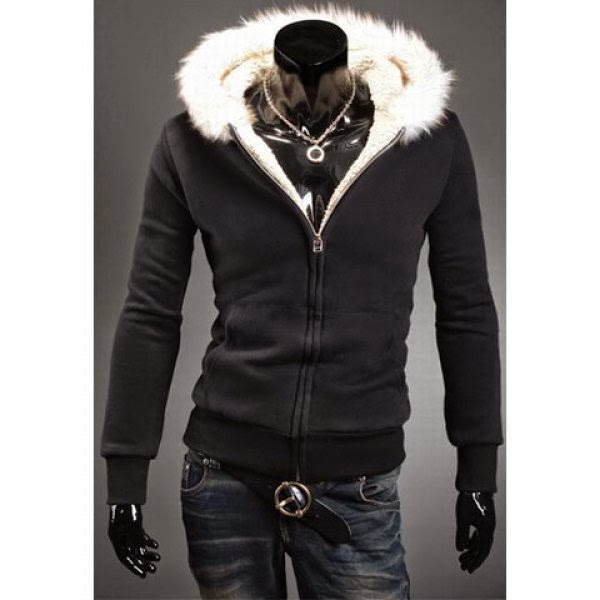 Who wears this shit?  I have no idea.  Well, I do have an idea, and I think it might be adolescent metrosexual Japanese guys.  Certainly not me.   I could understand if they were tossing up ads for Orvis or LL Bean or even Eddie Bauer, but no.  I get this sort of stuff.

Should I wear this to the next wedding I have to go to*? 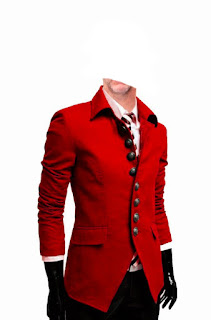 * or funeral.  Or lion taming gig.