Come on over. We'll watch The Voice and have some soup.

I don't generally watch reality TV, but this season I watched a little bit of the Voice. I've learned the best way to watch it is via DVR. That way, I get to skip (a) commercials, (b) background stories I don't give a shit about (c) the long, drawn out, artificial suspense of the actual choosing process, built-up by saying "And the winner is..." and then NOTHING AT ALL for a solid 60 seconds while suspenseful music plays in the background.
So I fast forward until I see someone singing, listen for a few seconds to find out if it's a good performance or a song I like -- and if it's not I fast-forward again. When they're doing the actual cuts, I just fast forward until someone jumps up and down really fast, then I stop it to see who got picked to stay. It's amazing how quickly you can watch a two hour program this way.
I stopped watching it a couple of weeks back when the guy I liked best got cut. I can't remember his name, but he was some older black dude with a great voice. I'm sure someone knows who I'm talking about. I think Christina let him go and kept the opera singer who made every rock song sound like it belonged in a Disney movie. Anyway, my wife told me who won last night, and she asked me if I wanted to see them choose the winner.
So I watched it, however I was not adequately prepared. I mean, I already knew who won, so I was prepared for that -- but what I was not prepared for, not even in the slightest, was the sheer, gut-wrenching roller coaster of emotions I experienced when I saw Christina Aguilera's big sparkly diaper.
What the hell was that thing? I could not look away. At first I thought I was looking at the commander of the Vl'hurgs after someone said "I seem to be having tremendous difficulty with my lifestyle." Talk about your terrible miscalculation of scale. I tried not to imagine the horror of three low-paid assistants with plungers desperately attempting to tuck all that ass up into what looked to be some sort of adamantium chastity belt, but I failed. It was like the Klein Bottle of underwear, with no inside and no outside. It was just all over the place and nowhere all at once.
And while I'm on a rant about this show, am I the only one here who thinks Cee Lo sucks? He really cannot sing. I mean, granted, he sings marginally better than I do, but then again, nobody is paying me crap-tons of money for doing something I suck at (contrary to what most of my co-workers probably believe). His voice has the timbre of a dull circular saw cutting through sheet metal and just goes to prove that the music biz is mostly all about luck and who decides you're going to be a star.
At any rate, I couldn't finish watching it, so I wandered out into the kitchen to find something to eat. I was looking for cereal in the pantry, but I saw a little box in the corner that caught my eye. It was a memory from my childhood that I haven't thought about in a really long time. It was this: 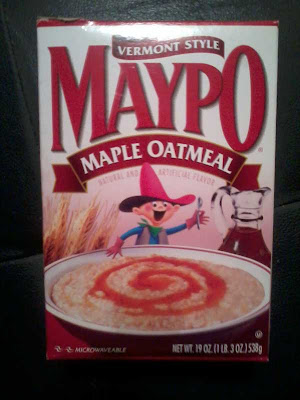 When did my wife buy Maypo? I thought, pulling it off the shelf. I haven't seen this stuff in years.
It turns out that was a very good question, because when I asked her, she said she didn't recall buying it. When I looked at the box, I immediately discovered why this was: 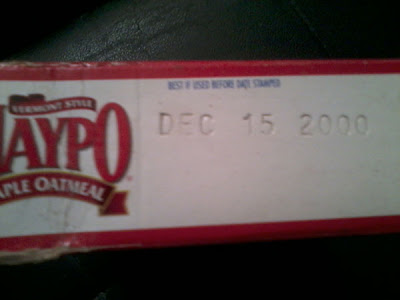 Yes, that is a 13-year-old box of Maypo you're looking at right there. Clearly I need to watch less reality TV and do more cleaning shit up. Incidentally, this one was the winner, if such a contest can even have winners. The runners up consisted of about ten cans of soup, a few boxes of crackers, some blueberry pie filling, three full boxes of instant oatmeal, 2 cans of breadcrumbs, a package of chocolate made for dipping fruit, and some unidentifiable dried things that I think used to be raisins or cranberries. Maybe both. Or neither.
Basically, what we had here was an evil pantry of horrific death, because the most recent date on this entire batch of carefully preserved botulism was -- believe it or not -- 2009.
I did take great pleasure in throwing out the Lentil soup though. I hate those filthy little skin-covered bags of sand.
By Johnny Virgil at 8:34 PM