One of my friends who reads my blog gave me an early birthday gift this past Saturday because she won't be around this coming weekend. Thanks to her, as I'm typing this, I am surrounded by the scent of Mandles* in (believe it or not) car air freshener form: 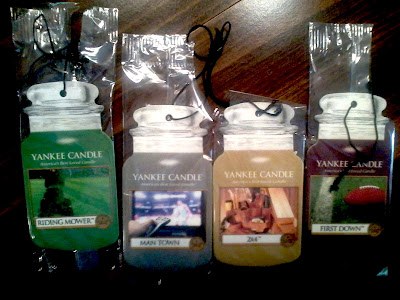 So I am here to give you the lowdown on each of these fine scents, but I have to type really fast because all of them together like this is making me a little sick. To encapsulate what I am smelling right now, it's almost like I'm cutting my grass behind the wheel of a leather upholstered, wood trimmed John Deere lawn tractor, and George Clooney is riding bitch.
That will make more sense in a bit, trust me. So without further ado, here's my opinion on each of these masterpieces:
2x4: I figured I'd start with this one because it's the biggest letdown. Sadly, it smells nothing like a 2x4. In fact, I'd go so far as to say it smells nothing like any sort of wood whatsoever. If you really stretch, you might say there is something reminiscent of pencil shavings in there somewhere. I can't exactly place the scent, but in my head I'm picturing a vending-machine vanilla wafer stick dipped in old spice and then shoved up an oompa loompa's ass. But that's my problem, not yours. Just know that it smells bad. Really bad. Like being trapped inside your grandmother's coat closet for three hours. (Also my problem.)
Riding Mower: This one smells like grass. A little too much like grass if you ask me. What do I mean by that? Well, I like the smell of cut grass as much as the next guy. I like the golf course, or when the windows are down in the car and I drive by someone mowing their lawn. It's generally a fleeting, pleasant smell. Now picture yourself being knocked unconscious and waking up here: 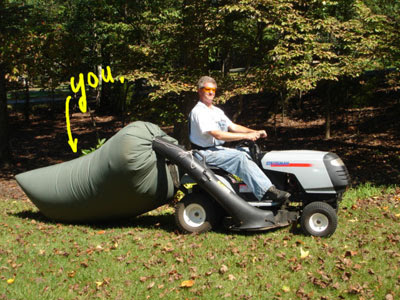 That's what it smells like. Overpowering. It smells like when you lift the lid on that giant garbage can full of grass clippings that has been sitting in the sun for three hours at the end of your driveway. Definitely not my favorite. Maybe not as bad as 2x4, because at least this smells like what it's supposed to, but that's still probably comparing oompa loompas to oranges. Although come to think of it, those little bastards were as orange as the cast of Jersey Shore, so maybe that's a bad example.
First Down: My Honda Fit has new leather seats now. At least, if you close your eyes and forget you're in a japanese tin can it does. If you've ever wondered how they get that pricey new car leather smell into pricey new cars, I will bet money that it's put in after the fact with whatever this thing has been dipped in. It smells like a new baseball glove, or a new leather sofa, or a new Lexus. (Or how I imagine a new Lexus to smell, since they generally see me coming and won't allow me on the lot.) This one is not bad at all. I have no idea if the actual mandle smells like this air freshener or not, but I would probably buy it on sale and then light it in the room where I have my cheap pleather couch. It won't stop your thigh skin from being torn off if you get up too fast on a hot day, but it'll make the experience much more olfactorily pleasant. It makes me feel like this.
Man Town: Here is a sentence I never thought I would say. Take me to Man Town and drop me off. This smells like the cologne I could never afford. When you get your first whiff of this, you immediately picture someone in a Brioni suit, flashing an understated Platinum Pearlmaster as they pay for their Grey Goose martini with their Centurion AmEx. In other words, you picture Bruce Wayne. Or George Clooney. But don't picture George Clooney playing Bruce Wayne because that was just total shit, regardless of how you think it might smell.
So I actually like this one. Man Town. Go figure.
My wife: What's that smell? Have you been rubbing that Man Town on your face again?
Me: What do you mean, again? It was only that ONE TIME. And no, I'm not a complete idiot. Even though it's ten times cheaper than that cologne I like, I wouldn't continue to rub a car air freshener on my face, day after day. That would be stupid.
My wife: Yes, it would.
Me: I plan to keep it in my back pocket from now on.
My wife: Man Town deserves you.
*shout out to Domestic Goddess for the totally awesome name that Yankee Candle missed out on. Check out her blog and tell her Johnny sent ya.
By Johnny Virgil at 5:24 PM