On the 4th day of our vacation, the rocket birds woke us up at dawn, as usual. This time we had the added bonus of coconuts falling from the trees onto the sidewalk and busting open. When they hit, they made a sound like someone popping a paper bag. It took us a while to figure out what it was --we kept hearing this THOCK! sound, but until we actually saw one fall and hit, we had no idea. I thought we had picked up some douchebag neighbors who were cleaning their sandals by slapping them together or something.
Since we were already awake, we decided on the spur of the moment to see if we could arrange a dolphin swim for later in the day. After being emboldened by snorkeling in a cenote the day before, my wife figured that she would probably be OK swimming with the dolphins as long as she had a life preserver, and as long as there was nothing in the water that could eat her.

First on the list was the "Dolphin Kiss." They don't really have much in the way of lips, so it was more of a "Dolphin Face Nudge." Basically, you had to cross your hands over each other palms up, the dolphin would put her head in your hands and lean up to your cheek while you hammed it up for the camera.

I was making up Prince lyrics in my head:
U don't have 2 be bottlenose 2 turn me on
I just need your blowhole, baby, from dusk till dawn
U don't need sardines 2 turn me out
U just leave it 2 me, I'm gonna show U what it's all about
U don't have 2 eat fish 2 be my girl
U don't have 2 be cool 2 rule seaworld
Ain't no particular fin I'm more compatible with
I just want your extra fish and your . . . . . kiss
Of course, like we all do, the dolphins expect to be rewarded for doing things right. The reward, in this case, came out of a disgusting fanny pack full of dead fish that the instructor had strapped to her waist. You know how wonderful spring lilacs smell when you get a whiff of them unexpectedly? This was the opposite of that. There was a greasy sheen on the water around the fanny pack, and every once in a while, you'd catch a whiff and it would remind you of what you were swimming around in.
The next thing they had you do was swim out about 30 feet into the middle of the pool and hold out your left arm. The dolphin then swam under you and flipped over, allowing you to grab her fins. As soon as you had a good grip, she took off across the pool, swimming upside down and towing you through the water. I kept waiting to get her fluke* smashed into my crotch, but it didn't happen. It was actually pretty amazing, and it gave you a good idea of how strong they actually are.
Last on our list of activities was something called the "boogie board foot push" which involved laying on a boogie board with your feet and knees in a locked position while the dolphin stuck her nose in your foot arch and proceeded to try to ram your foot-bones through your spine. They warned you over and over to keep your knees locked, your leg muscles tightened, and your feet pointing down. If you did this, the dolphin would push you across the pool at roughly 20 miles per hour. If you did not do this, then you ran the risk of having a dolphin nose shoved up your blowhole at roughly the same speed. Trust me, my muscles were so tight you could have bounced cinderblocks off my ass.
After that, you get to dance with the dolphins a bit, they do some additional tricks and then it's all over but the high pressure sales pitch to buy the pictures and DVD set. On the way back, they shuffle you into a room where you have to watch your video. Ours wasn't too good because we had gone later in the afternoon and the sun was getting low. This meant that most of the video was in silhouette and pretty poor quality, and they somehow managed to miss the upside-down fin-swim completely. After the video, you are shuffled off to the picture counter to look at the final prints.
Like most everything else in Mexico, there is the price and then there is "the real price." We actually did like two of the pictures, but we thought they were too expensive so we were going to just say no and leave them there. We watched the price go from $100, to $80 to $60 for the entire package, and then when we still turned that down, they started breaking things out into single items. Eventually, the deal became too good to refuse and we ended up buying a couple of 8x10's for about 25 bucks.
After that, we changed back into our clothes and met the rest of the crew for the return trip. We swapped pictures and stories, and someone brought up the variable pricing scheme that seemed to be in effect. The discounts ranged from about 35% to 70%, depending upon how hard you bargained. Of course, the only person who paid full price was the poor Indian guy. He just shook his head in disbelief and didn't know whether to laugh or cry.
After the grueling ride to five other resorts, I can honestly say that I liked ours better. The others were nice, but they had a very "corporate" feel to them. There was something a little stepford-y about them; they seemed soulless. As we were driving past all these fancy buildings, I remember thinking, "I'll bet you a month's pay that the people staying here aren't putting their crap into wastebaskets."
So that was our adventure for the day. They were beautiful, intelligent creatures and I'm glad we took advantage of the opportunity. I would highly recommend meeting a dolphin at least once in your life. But not like this. Warning: That link is probably not safe for work. Or anyone, anywhere. There are no pictures, just text, but the URL may get you into trouble. You will learn...things....that are better off remaining unlearned. Don't say I didn't warn you.
PS - I got this in my bag of chips: 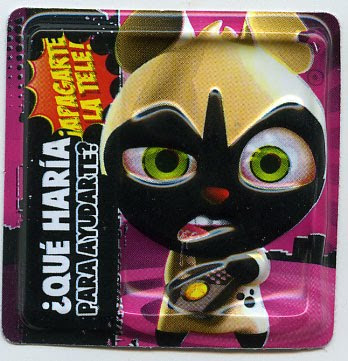 *I wanted to use the correct term and not say "tail" so I looked up "dolphin physiology" and ended up on the page in that link. In retrospect, I should have just said "tail."

PPS - Who has Prince stuck in their heads now?
Continue to Part 6
By Johnny Virgil at 4:13 PM