First, let me mention our housekeeper. She was awesome, and every day we'd come back from the beach and have a new "towel animal" on the bed. This one was a little confusing to me because it had the head of a rabbit and the body of Rosie O'Donnell: 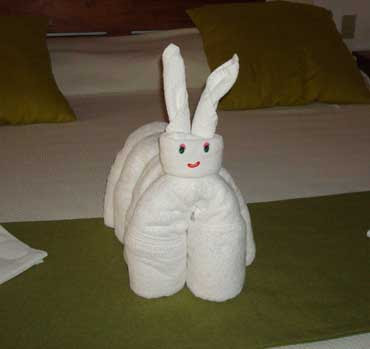 I thought this one was actually quite impressive: 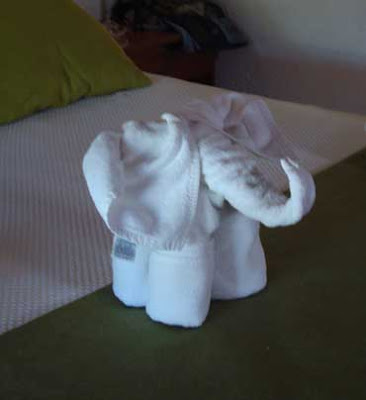 On the last day, she went all out and we came back to this: 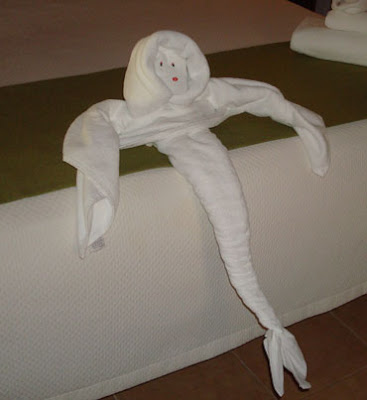 I didn't know whether to dry myself off with it, hump it, or run away from it. I think it was supposed to be a mermaid, so the rules of mermaid/man interaction state that I am required to hump it, and it was looking at me kind of suggestively. On the other hand, I could also picture myself waking up at 3am to find it hovering over my bed, waving its towelly appendages and trying to latch itself onto my face like a giant palapa bug. It was touch and go for a while, and then I remembered I was on a romantic vacation with my wife so I did the honorable thing and just had a threesome.
Our Tulum trip was set up by a place called Yucatreks, and our guide, Mitch, was an ex-pat from Seattle. He was a cool dude, and it was sort of like being led around Mexico by Trey Anastasio in a safari hat, only with a slightly thinner coating of bong resin. Our tour was going to include the ruins, snorkeling at two cenotes, and lunch on the beach. All in all, a full day.

We hit the road for the hour trip, and tried to buy ice at three different places. Apparently ice is hard to come by on the road to Tulum. The day was windy as hell, so it was probably a good day to wander around the ruins without passing out from the heat, but a bad day for just about anything else, including eating off paper plates on the beach. Here's a shot of a temple from one of my favorite vantage points: 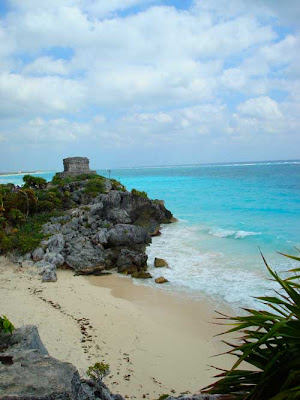 It was truly beautiful, and I can totally see the Mayans' thought process here. They were probably just wandering around in the jungle, getting eaten alive by insects the size of ring-tailed lemurs, when suddenly they came out on this cliff overlooking the beach and started high-fiving each other and yelling, "FUCK, YEAH!!" Or maybe that was just me.

Apart from the ruins, the other interesting thing was that March is apparently iguana mating season. I've seen iguanas in pet stores, and these were NOT the same thing. For one, these are very, very large, and very, very angry, and they were fighting over the wimminz. Also, they seem to have decided that since the Mayans moved out, the place was up for grabs. They were on the top of the food chain and they made sure you knew it: They didn't just sit there as Master of All They Survey, either. They'd do violent push ups on whatever they were on top of (rock, ancient temple, female iguana, etc.) and the males would get into these slow-motion fights that would involve latching onto each other's necks and pushing with their legs until one of them got flipped over. Then the winner would just keep the loser there until he cried "Uncle!" in iguana-ese or something, then he'd let him up. This would normally take upwards of five minutes, and by that time the female iguana was shaking her iguana ass in front of a different male. It was like watching two drunk guys in a bar fighting over a girl they didn't know was a hooker.

When they're not humping or fighting, they can really move. I always thought of iguanas as being slow, but they can run like a bitch if they want to.
When we got to the ruins themselves, Mitch hired a local guide who looked like Carlos Santana to give us the rundown. He knew a lot, but his English wasn't so hot, so he was hard to pay attention to. Or maybe it's just because I have a short attention span. We followed him from place to place, and I pretty much tuned him out and just looked at the ruins and the lizards. I saw one giant bastard about a hundred feet away, trying to mount this female and she was having none of it. She'd move away, he'd follow, then she'd move away again.
Finally, she had enough and took off in a full-speed, high-steppin' nose-in-the-air run, right toward our group. The giant male was right on her ass, and nobody but me noticed it because they were all listening to Carlos. We were walking slowly down this open path, and my wife and I were straggling a little bit behind the rest of the group. The female iguana tore ass across the path about ten feet in front of my wife and she didn't even notice, because she was looking the other way. The male, sensing he was going to be out-run by his conquest, just ignored our presence and continued running at full speed until it was almost too late. He didn't stop until he nearly collided with my wife's legs.
She noticed that, let me tell you. She jumped out of the way and let out a little scream, and the iguana just stood there hissing at her, mouth open and head bobbing up and down. Since my wife had never cock-blocked a horny iguana before, she decided to very quickly move in another direction. I stuck around for a second or two in order to (very carefully) take his picture: 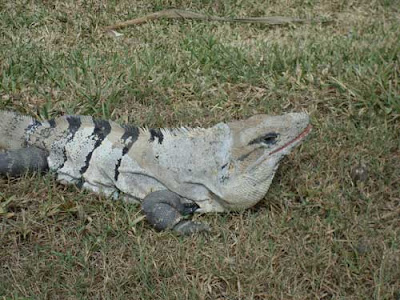 He was not pleased.
Next on our list of things to do was to snorkel in some cenotes. Since my wife can't really swim, we weren't sure how this was going to go, but she did OK. They gave her a life preserver and we saw some freshwater fish and a shitload of bats. I tried not to think about the fact that everyone always says "don't drink the water," yet here we were snorkeling in it. I also tried not to think about the fact that I had my face in water that was filled with bat shit and the accumulated urine of thousands of foreign tourist-children, but it didn't really do any good. I just resigned myself to living with whatever festering pestilence was going to take root in my body.
The oddest thing to me was that I expected the cenotes to be off in the jungle or something. Instead, they were right off the main road, and had sort of a "roadside attraction" feel to them. The water was pretty damned cold too, so I didn't stay in long. At the second one, you could actually jump off a bit of a cliff into the water. I did this once, just to say I did. This picture captures the exact second my balls shrunk to the size of marbles and snapped up into my esophagus: 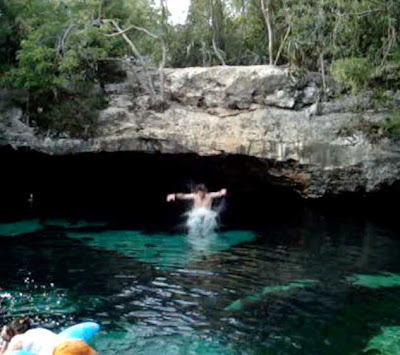 Lunch on the beach was fantastic -- the area of the beach we were on was pretty remote and we were the only ones there. The food was local takeout, and it was damn tasty. Mitch cut up fresh avocado and made some guacamole, and then unpacked roast chicken and potatoes and rice and beans, and a bunch of fresh fruit. We ate, had a couple of beers, then hit the road again. It was simple, but it hit the spot after a day of walking around and swimming.
My next post will be about our swim with the dolphins. Well, the dolphins didn't really have much say in the matter, so whether they actually wanted to swim with us was kind of irrelevant, but they did as they were told. Also, they are little whores for dead fish.
For those of you still with me, I'll try to wrap this vacation thing up soon. Maybe one more post about the dolphins, another post about the USAir corncob reaming on the way home, and we'll be done. At this point, it's probably like being forced to watch a slide show of your uncle Mort's trip to the grand canyon or something. 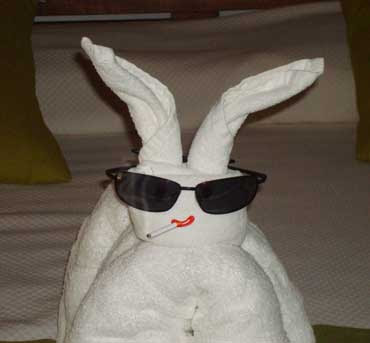 Peace out.
Continue to Part 5
By Johnny Virgil at 5:49 PM