Want some advice? Don't love the ocean too much. It doesn't love you back.

And with that line, Mega-Shark vs Giant Octopus really got rolling.

The best part of the movie had to be the story. No wait, it was the special effects. Or maybe it was the acting...sorry, I don't know where in this steaming pile of awesomeness I should start the tour.

After some deliberation, I've decided that there is just no way I can review this movie. It's too horrible and yet unintentionally laugh-out-loud funny. I simply cannot do it justice.

I fully intended to give you an actual serious review. I did. I swear. I even sat through the entire thing and took notes. That's how dedicated I was to this idea. Instead, I present you with my notes. You can make your own judgement. 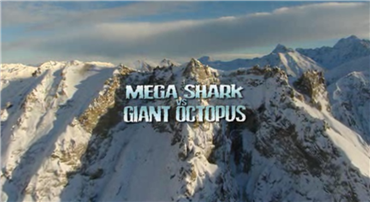 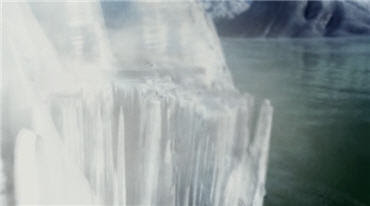 A fake mini-sub is watching a pod of whales lose their shit because of this LFAS. In this sub are Debbie Gibson and some fat guy who has no business in a mini sub: 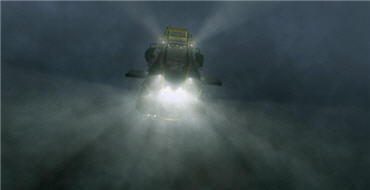 The whales are crashing into the ice walls, confused by the sonar.
Suddenly you see: 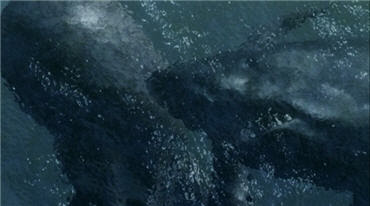 A drawing of Mega Shark and Giant Octopus! Behind a wavy piece of bathroom privacy glass!
Debbie makes her combo scared/disbelief face: 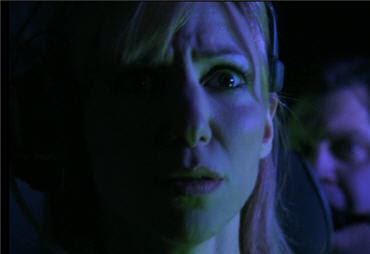 Someone shoots a bb-gun at the glass (what it looked like) or it got hit by a whale (what actually happened) and they're free: 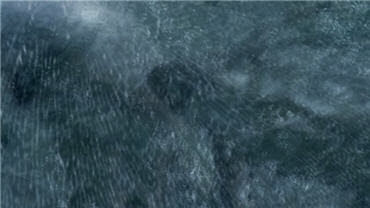 ....and they drift down to the ocean floor, somehow still alive and not frozen to death.
Cut to an oil rig, where there is a mystifying conversation about peeing on a co-worker and something about how Japanese custom frowns upon that. Then, this happens: 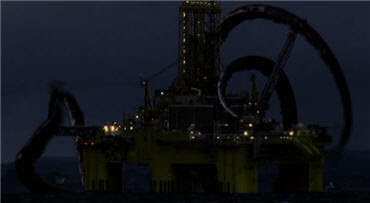 Now we're back in Cali, on the beach with the fat guy and Debbie. There's a beached whale with giant chunks taken out of it. I'd like to interject here that Debbie looks like a washed up stripper: 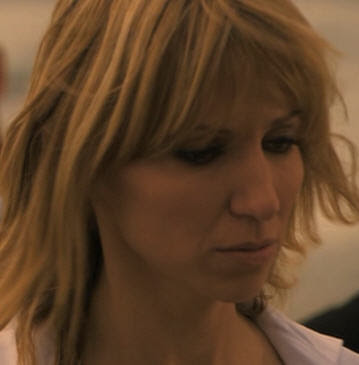 Also, there are some of these: 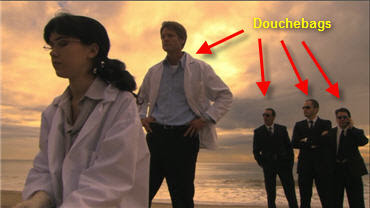 Then she steals a giant prehistoric shark toof out of the blubber: 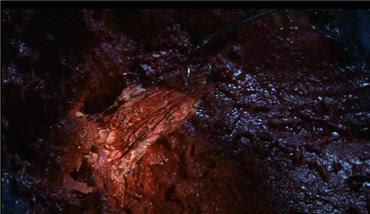 Next we go back to Tokyo where a guy who looks like substitute Sulu is interrogating one of the oil platform guys.

Then we're flying somewhere on a fake jet: 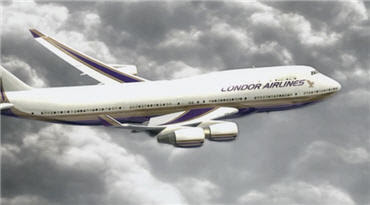 Just so you know, this face: 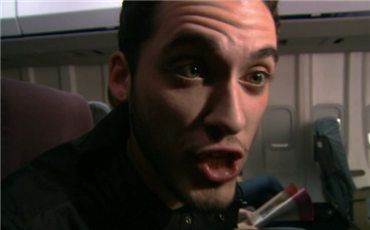 is what happens just before this: 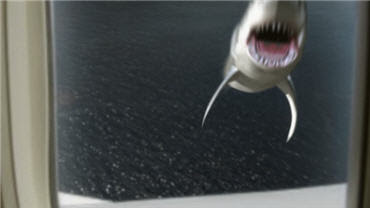 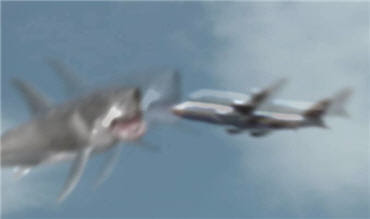 Then Debbie gets fired for trashing the sub and goes to see Sean Connery. Well, not really. It's just some old Sean-lite Irish guy who is an "ex-navy paleontologist guru," and they play with colored water in test tubes and computers with pretty graphics and then he tells her that what she has is a giant prehistoric shark toof.
So then SubSulu flies in to Cali and meets up with Sean-lite and Debbie and they put two and two together, and discover that he has a giant octopus to match their giant shark.

"The polar ice caps are melting because of our thoughtlessness." Debbie says, staring wistfully out to sea. "Maybe this is our comeuppance."

Then they climb into their car with the Obama Change bumper sticker and drive away.

And then we're in a battleship, with the crazy captain who looks like the love child of Hunter S. Thompson and Dr. Cox from Scrubs: 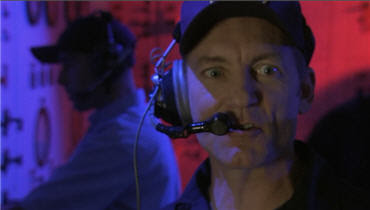 He's tracking the Megashark, but then suddenly it's swimming right at them at 500 knots, and it's not leaving a wake: 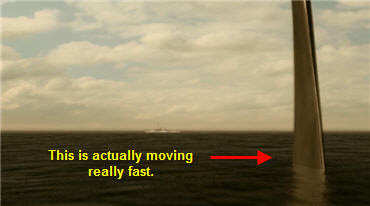 That's some awesome special effects right there. As is this: 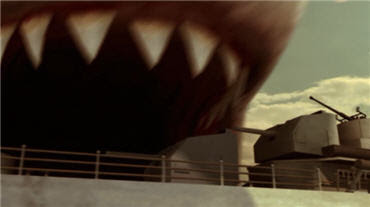 Of course, Coxhunter's orders from Washington are to destroy the Megashark, which he does. Just kidding. He only thinks he does, and then the shark eats the battleship and his acting career is over.
Then Subsulu, Debbie and Sean-lite get abducted by Government agent Lorenzo Lamas, who can't admit he is no longer Renegade and so still has a pony tail and a coating of grease: 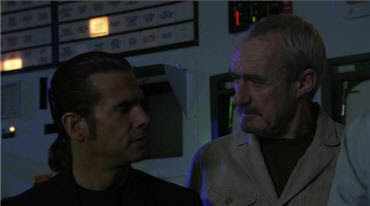 They aren't really prisoners, he just needs their help - and taking people at gunpoint is obviously the best way to get help from people who actually want to help.

At this point, things got dicey, and I stopped taking screen shots and just started jotting down random thoughts as the movie unfolded. Favorite quotes, observations, questions. Oh yes, I have questions.

"They don't rest. They just kill."

Debbie Gibson, Super Scientist. She's making octopus and shark pheromones to lure them together to capture them, but her experiments fail, I think because mixing test tubes full of water tinted with food coloring really doesn't make pheromones.

I thought for sure Subsulu was gay. Then he and Debbie did it in the storage room. My gaydar must be off.

Yay! Good pheromones. You know how I can tell? Because it's no longer food coloring in water, it's the stuff out of a green glow-stik.

Oh, I see. They are trying to draw them in with "breadcrumb trail" of pheromone droppings.

Oh, Lorenzo. It's been too long. Only Bill Shatner rivals you in the overacting department. Or maybe Coxhunter.

And then a fighter plane is slapped out of the air by a tentacle.

"We're going into their world now.. Their pond..."

To make the sub go faster, you just have to lean forward in your seat really hard and look serious. Who knew?

Oh shit. It just ate the golden gate bridge. As far as I can tell, its entire diet consists of planes, battleships and bridges. That can't be good for your digestion.

The octopus is still in Tokyo. "Our military has only succeeded in angering it. My god. What have we done?"

OK. The navy wants to nuke them and not capture them, but you knew that.

"I suggest we get some rest and reconvene. Nothing can be accomplished in this state of exhaustion." Yeah, let's take a break while all this shit continues to go down.

Oh no! Dream sequence! Kissing SubSulu! Seeing stuff that only we saw from our omniscient standpoint!

Debbie's breakthrough! Get them to kill each other! Just say no to nukes!

"They were frozen in battle." Wait, how fast did this ice age happen? It's not like Pompeii for fuck's sake.

"They are natural born enemies. They chose to stay and fight to the end. A hate stronger than their combined survival instinct is our only hope."

So what he's saying is, they basically hung around getting colder and colder, and their fight got slower and slower until it looked like a fight on Walker, Texas Ranger, and then they went into suspended animation somehow.

"Neither has followed a consistent pattern." "Yeah, but somehow it makes sense."

The people actually driving the sub? Perfectly still. The people in the back? Bouncing around like they're in a washing machine.

"I want that commander on report!" "That commander saved your ass!" "He should have done it in a more timely manner!"

"We must remain optimistic," he says, looking like he has to shit really bad.

Nuclear subs are driven by one guy with a joystick. Who knew?

"Captain, I'm picking up a massive underwater disturbance. Two bogies. Hard to say what they're doing."

Oh, apparently, they're fighting. From what I am seeing on my TV, I would have sworn they were fucking. And why does it sound like a little kid splashing around in the sink?

"Who has the upper hand? It's impossible to tell. It's just a massive sound." Of a kid splashing around in a sink.

Ooooh, sharky just bit off a tentacle and got hisself inked. The tentacle is back again. Now it's gone. Now it's back.

Could have sworn the captain of the Japanese sub just said there was a massive disturbance in the vicinity of hairy slut. No wait. It has to be something else. OK, I rewound it three times. They are heading towards hairy slut. Case closed.

Everyone in the sub gets tossed to the floor, all the emergency lights go on, there's smoke, all sorts of beeping...and what does the captain yell? "Something hit us!"

Giant Octopus handled that sub like a loaf of french bread.

It's the fight to the death!

"Looks like they finished what they started 18 million years ago."

Oh no, Subsulu is dead.

No wait! Subsulu is alive.

They're kissing again. Subsulu is so gay in real life. It's like watching George Takei after he came out.

Suddenly, Sean-lite is there. They are needed by the government to chase other newly thawed giant creatures in the north sea. As a team. How romantic.

I'd watch it again, but I have to watch Frankenfish.
By Johnny Virgil at 9:23 PM