Are all eye-doctors a little crazy? Is there something about spending most of your work day in a dark little room with your face three inches from someone you just met 30 seconds ago that eventually makes you turn into some sort of white-coated psychopath who wants to collect skin suits? Or is that creepiness factor the main reason you became an eye doctor to begin with? I'm just curious because it seems like every time I get my eyes checked at a Lenscraft or a Dinapoli because I can't get into see my regular eye doctor, I end up with one of these fruit loops.

The dude who ended up doing my exam looked like a 60-year-old version of John Denver, including the "rocky mountain high" part. He kept making stupid jokes and then chuckling at them, which really didn't do much for my confidence in his professional abilities.

At one point he said, "Wouldn't you like to see better, Johnny? Wouldn'tcha? I'll bet you would. I can do that for you!" Then he laughed like a mad god. Or like Willy Wonka. Actually, maybe that's the same thing.

A little while later, as I was sitting comfortably with my left ankle resting on my right knee, looking through the machine at some light he was blinding me with, he leaned in whispered, "Put your legs to either side and let me slide in there." I felt so dirty, but I did what he asked. After all, he was paying for it. No wait, that's not right. I was paying for it. Dammit.

Anyway, all I wanted was for him to get on with the exam because I was on my lunch hour and quickly running out of time. Also, his breath smelled like he had pastrami and coffee for lunch, and I was sick of breathing that shit in. Since his face was so close to mine, it was still warm when I smelled it. After the first couple of times he exhaled directly into my nasal cavity I started holding my breath. I'm sure the stars I was seeing from the oxygen deprivation helped the accuracy of my test results.

1. I'm old. I need both reading glasses and driving glasses. In other words, bi-focals. I'm just going to find an old pilled-up grey cardigan and start wearing it to work with my polyester slacks. I'm thinking I'll get one of those fake gold chains to hold my spectacles, too. Maybe a fedora.

2. The results are based on crap. He was constantly asking me questions like, "Which is better? A.....(flick) or B?" and they were both exactly the fuck the same. "Uh...they look exactly the same," I say. So he says, "Which is better? A.............(flick) or B?" like I didn't hear him the first time. After he flips it back and forth three more times, each time asking me the same question (only with longer pauses between the words, like I have suddenly become Norwegian and don't have a firm grasp of the English language), I just pick one randomly, because that's the only thing I can do to get out of that Groundhog Day pastrami loop from hell. I also loved the question "Are the letters clearer or just darker and slightly farther away?" WTF.

3. It's going to cost me an ass-ton of money. I looked around at the frames they had available and the prices on them started at $400 and went up from there. That's before they even have lenses in them. The thing I don't understand about this racket is that the frames don't seem to be any better in quality than the ones on my $20 dollar sun glasses. The reason I was in there to begin with was because I was cleaning my glasses and the weld between the lens and the nose piece broke. That's bullshit, right there, considering those were $200 frames and my $20 sunglasses are still going strong. Also, if you don't want the old lady bi-focals, you have to spring for these progressive lenses which run about $700 bucks without the frames. I still haven't gone back to pick out glasses yet, due to the sticker shock and the pastrami. I mean, holy hell. That's halfway to laser eye surgery. Maybe I'll just squint for another 6 months and save up some more money for that.

I'm thinking of trying one of those internet places where you can pick out frames, input your prescription and your pupil to pupil measurements, and they make the glasses and send them to you -- all for about $60. I'll probably end up looking like this: 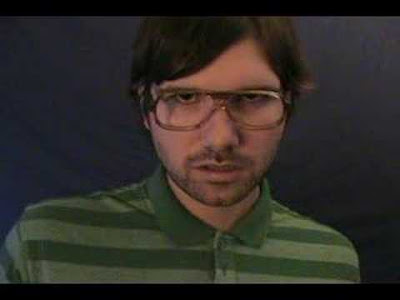 It worked for my replacement hot tub cover is all I'm saying.

[update: Just as an experiment, I ordered a couple of pairs from Zenni. One pair of progressives and one pair of single script sunglasses. Total cost: $80.75. I'll keep you posted.] *update* - I cancelledthe Zenni order because they were on a slow boat from china and ordered from 39dollareyeglasses.com instead. They weren't 39 dollars, but I did get brand name progressives for about a hundred bucks.
By Johnny Virgil at 4:16 PM