It's good to be the Agbunag.

OK, to start with, I just read this:

HONOLULU – A 24-year-old woman, on her first trip to Las Vegas, is worrying less about the nation's economy. That's because Jessica Agbunag won $2.4 million on Wednesday at a Wheel of Fortune slot machine at the California Hotel and Casino.

Agbunag, a baby sitter who graduated high school in 2002, was in Las Vegas with her boyfriend and family in remembrance of her grandmother's birthday. Her grandmother was a frequent visitor to Las Vegas who loved slot machines.

The Wheel of Fortune machines were good to Agbunag.

She twice won much smaller amounts earlier this week at the same casino.

But on Wednesday, she inserted $16 into a Mega-Jackpot machine and it hit big. She said she plans to pay off a car and give some money to relatives.

Well, at least now she has the money to buy herself a new last name. WTF.

At any rate, this is never me. I have the absolute worst luck in any sort of game of chance. I buy lottery tickets sometimes, and I think the last time I bought one, I didn't pick a single number correctly. Not one.

I can't say I never win though. I did win something once. When I was a kid, I decided that I was going to enter every contest I could find. Every sweepstakes, every radio giveaway, everything that required sending a proof of purchase or a 3x5 card with my name on it. I drove my mother nuts. I think I probably spent about $200 bucks in postage over a single summer.

Then the big day arrived. The UPS truck pulled up outside our house, and the driver wheeled a giant box up to the door, and it had my name on it. By that time, I had entered so many contests, I had no idea which one had finally paid off. I figured a box that size could only be the grand prize, or maybe even a 1st or second prize. I wasn't picky. I had finally won something. I hauled the box into the kitchen, and I couldn't believe how heavy it was. This was going to be good. I could feel it. I unstrapped the box, and opened it up to reveal.....

4 cases of canned giant black olives. Pitted. I thought my mother was going to piss herself she was laughing so hard. I didn't think it was funny, and I was disappointed for weeks. And of course, every night my mother would ask me if I wanted any olives with dinner.

Lastly, since I don't have anything else ready to go at the moment, I'll share this with you all. My friend is a woodworker, and a while back he got careless and ran his thumb through a table saw. Luckily (?) he did it length-wise and not across, so no digits got flung across the room into the wall or anything. But it was pretty gruesome just the same. He sent me a picture of his thumb after they stitched it back up, and he wanted me to make a sign for his shop, so he would always remember to be careful. Originally we had talked about his thumb in one of those red circles with the line through it, but the more I got thinking about it, the more I thought a poster would do the trick.

Here's what I came up with: 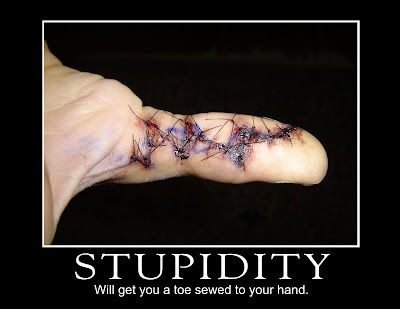 Sorry for that picture. I know it's relatively disgusting. I think I'm going to hang one in my own shop. Because I sorta like my toes.
By Johnny Virgil at 1:46 PM