My future, she is-a so bright.

A while ago, someone contacted me via e-mail and asked if I'd be willing to give an honest review of his product for a free sample of said product. I agreed, thinking it might be something fun to play with, and there was always the possibility I could make my review slightly amusing. I waited and waited, but nothing showed up. He never contacted me again. I figured he had decided against it after I told him I had a humor blog and I would be brutally honest in my review. I also told him there was a good chance I'd make jokes at his expense.

Well, De Filippi, he came-a through!

The other day, my "free gift" was sitting in my mailbox. After coming here all the way from the old country, postaprioritaria, the package was still in one piece. Yes, it came from Italy. Milano, to be exact. 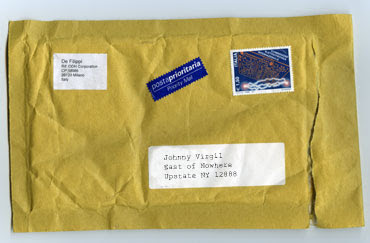 So now I know exactly two things that are produced in Milano: 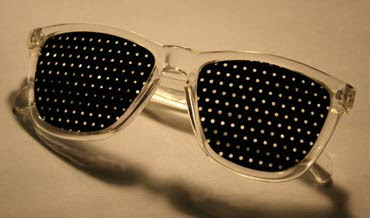 In case you're wondering, these strange-ass looking things are called pinhole glasses. If you think they look freaky just sitt 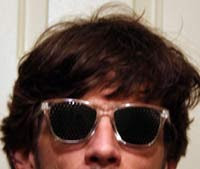 ing there on the desk, you should see how weird they look when you put them on. I think the fact that they appear to be cut out of a black leather car seat probably has something to do with that.

The funny thing is, they kinda-sorta actually work. I've needed glasses for quite a while (I'm nearsighted) and these work by focusing and limiting the amount of extraneous light that gets to your eye. If you're interested, you can read about it here.

Unfortunately, they are almost useless unless you're looking at something very bright, because not much light gets in at all. If I look through them for more than a few minutes, my head feels like it's going to explode. There's an odd momentary distortion when your eye moves from hole to hole, but things are actually quite clear. I'm not sure if you'd ever get used to it, but the overall experience is probably pretty close to being knocked unconscious and waking up trapped inside of an air hockey table.

In the history section of the website, they mention Eskimos using a variation on these to prevent snow blindness, using slits instead of pinholes. I thought that was pretty cool, because one of the first comic book titles I ever collected as a kid was The Flash, and this cover immediately popped into my head: 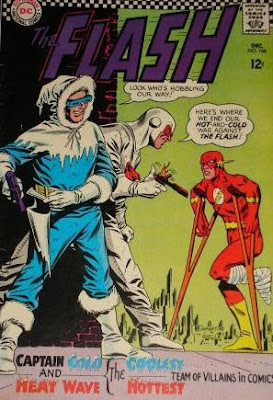 Yeah. Captain Cold and the Heat Wave. Supervillains or a 1970's Funk Band? You decide. But The Flash on crutches? That's the best they could come up with? Looking back on it now, it had to be a low point for DC.

Anyway, if you choose to view this as a paid advertisement, consider this: I don't care. I got me a free pair of pinhole glasses, and you didn't.

Besides, they've done wonders for my piano playing.

You've got the right one baby!

* When I was a kid, I always thought they were called mulatto cookies.