I figured I had seen everything there was to see in the men's room. At least during normal business hours. Apparently this is not the case.

Today, I followed a gentleman into the bathroom and witnessed something completely new to me. In case you were wondering, I followed him by chance, not design. What I mean to say is that I don't make a habit of following strange men into the bathroom just to see what there is to see. I was just going in there to rinse out my coffee cup.* Now that we've cleared that up, on with the story.

He walked in, went directly to the paper towel dispenser, and cranked out a few sheets. It's pretty narrow in there, so I waited for him to grab the paper towels before trying to sneak past him to the sink. Much to my surprise, he didn't take the towels and leave. Nor did he blow his nose, or wipe coffee or ketchup off his clothes, or wet it and wash his face...he did none of those things you would normally expect someone to do with a wad of paper towels.

What he did instead was this: He hung a right and headed toward the urinals opposite the sinks and mirrors, where he proceeded to use the paper towels to take out and hold his junk while he pissed.

First off, if your junk is so fucked up that even YOU don't want to touch it, you might want to look into getting it removed. Or I suppose you could wait a week until it falls off by itself. Either way, I am pretty sure that when you're at the paper towel stage, it's clearly not going to get better on its own.

Secondly, there's the apparent lack of control inherent with this technique. Although he seemed to have it down, there is no way I would be remotely comfortable with it. I think the lack of tactile feedback would adversely affect my aim. It would be like trying to hold a breakfast sausage with an oven mitt. (Obviously, a really big breakfast sausage. Ahem. Anyway.)

I'll admit, when I saw this novel behavior, I was curious. I grabbed some paper towels myself, and -- I am almost ashamed to admit this -- I started drying my coffee cup.

What were you expecting? I'm not an idiot and I had no desire to spend the rest of my day with pissed on clothes. I was just stalling to see what was going to happen next.

I have many theories about this guy and his untouchable member. First I thought maybe he just had an aversion to water, and didn't feel like washing his hands. With the paper towel method, he could avoid touching the festering sores and then just open the door with the paper towel on his way out. Obviously, this would be disgusting, but I put nothing past humans in their natural habitat.

That theory, however, was destroyed soon after it was conceived because when he was done he used the paper towel to zip up, then threw it in the garbage before washing his hands.

Actually, that's pretty much the only theory I had. I still can't figure it out. If anyone has any other bright ideas as to what was going on here, let me know. People are strange, I know that much. 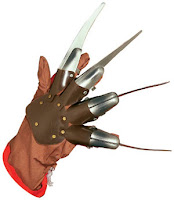 I think I'm going to start donning one of these before I take a piss, just to see what people do.

For more humor you can't touch without a paper towel, check out humor-blogs.com. Even though the Clay Pigeon is no more, there's still lots of good stuff over there every single day.


* [edited] It wasn't the one I was using, for god's sake. I'm much too OC for that. It was a mediocre travel mug that had languished, unused and forgotten, on my desk for a week or so. It had become a disgusting science experiment, and I needed to dislodge the life form from the bottom before I brought it home to be washed. Now you are all making me think I should have just thrown it out. And also making me think I should have skipped this post entirely.
By Johnny Virgil at 9:32 PM