The More You Know.

Did you hear about the two geniuses who tasered a guy and stole a Stradivarius violin worth five million dollars and then stuck it in a suitcase and hid it in a friend's attic?

First off, WTF were these guys thinking?  Did they think they were going to just walk into Rudy's Pawn Shop and Paycheck Loans and walk out with a few million in loose 20's?

Secondly, if you were convicted in 2000 and did five years in prison because you stole a sculpture worth twenty-five grand back in 1995 and got caught because you tried to sell it back to the guy you stole it from, you might be looking for a new partner.  A smarter partner.  Dare I say, a partner with some Knowledge?

And really, if you're going to partner up with someone like that, you'd probably feel pretty safe going with a guy named Universal Knowledge Allah, am I right?  I mean, the dude has got to know what he's doing when it comes to, well, just about everything, having such a humble yet descriptive moniker.

But unfortunately for both of them, Universal Knowledge Allah did not live up to his name, and while the plan to steal the violin actually worked, the plan to stay out of jail after the fact did not. 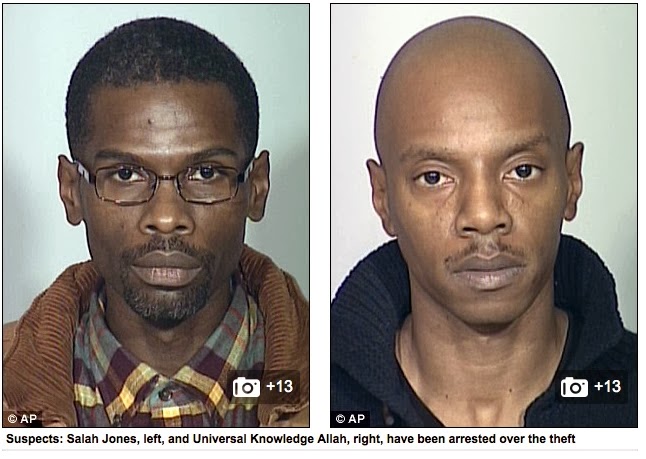 Just goes to show you that sometimes a little Knowledge can be a dangerous thing.

I'm sorry. That was horrible.  Try the veal.