Who wants to draw something?

A few days ago I bought an app for my iPad called "Draw Something" and it's actually a bit of ridiculous fun. You can invite your friends to join, or you can just hit a button and start a game with a random stranger. I've been playing it on and off for a while and I've come to a few conclusions. My advice? Don't play with random strangers.
Somehow, and I don't even know how this is possible, a lot of people don't get that it's called "Draw Something" and not "Write Something." So listen up random stranger: if the word you are supposed to be drawing is "Sugar" don't draw a five pound bag and then write SUGAR across the front of it, dumbass.
Here's a recent example. See if you can guess what this might be: 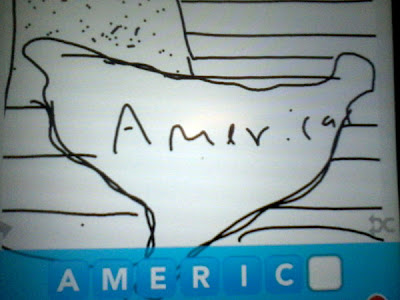 I'll give you a few minutes to work on it. Calculators are allowed.

The good thing is, you can resign games if the people you end up playing with are complete idiots, so yeah I resigned that one. Mostly because he or she drew the outline of the United States and somehow managed to leave off Florida. Stay in school, kids.
Also, even among people who actually understand the one simple rule of this game, there are a lot of people out there who seriously can't draw for shit. The funny thing is you get to watch them as they're working on the drawing, so you get to witness the mistakes and the do-overs. You can almost see the thought processes that are going into the drawing. Some of them just defy description.
Here's one that I didn't guess. In retrospect, it's actually not bad: 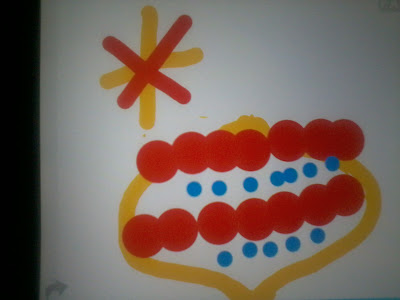 The first person to guess it will win something. I'm not sure what yet, but rest assured it will be worth almost nothing and most likely be completely useless. But then again, maybe not.
And since the first one was apparently too easy, here's another chance for everyone else. I actually got this one so maybe I'm not as slow as I thought: 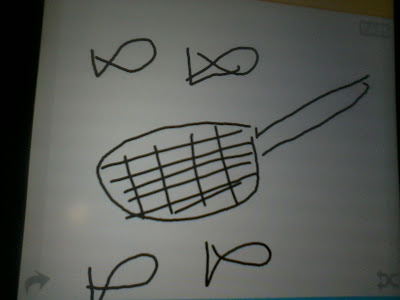 So anyway, this is where you come in. If anyone wants to play, you can look me up in the game using johnnyvirgil. I promise not to make fun of you.
Too much.
p.s. - Since I turned off that word verification thing I've gotten about 50 spam comments. They come to my inbox regardless of whether they show up on the posts or not, so I get to mark them as spam every day. Sigh...the things I do for you. Also I appear to be coming up on 2 million visitors sometime soon. So thanks for that. I wish I had a way to determine who the 2 millionth person was. I'd buy them a beer or something. I'm pretty sure it's going to be a spammer, though.