Am I the only one who thinks Jane Seymour should stick to acting and leave the jewelry design work to someone more qualified? Every time I catch her "open heart" necklace ad on TV, all I see is a fat sparkly ass dangling on a chain.
So it's Valentine's Day and everything everywhere is covered in hearts. I've always wondered where the "heart" shape came from. It looks nothing like an actual heart, right? I suppose with the internet at my fingertips I could look this up, but the depths of laziness you can achieve when you have that sort of research tool at your disposal are pretty amazing.
It used to be that if I thought, I wonder where the traditional symmetrical image representing the heart originated? I'd either have to drive to the library, look it up and make some photocopies of the pertinent info, or just decide it wasn't worth the effort to know and remain ignorant. Doing the latter, however, would ultimately drive me crazy enough so that I'd probably end up at the library anyway trying to find answers.
These days if I ask myself that question, I can either: (1) type a single sentence into a search engine and have instant gratification with a couple of mouse clicks, or (2) refresh my twitter feed to see what @wilw's dog just said. (Dog: IMA PLAY WITH YOU! Cat: Fuck off. Dog: POUNCE! Cat: Watch me run across the wall like I'm in the Matrix.)
So yeah. No idea on that heart thing.
I did manage to rummage around in my old third-grade Valentine's day card pile and come up with the most terrifying card I ever received: 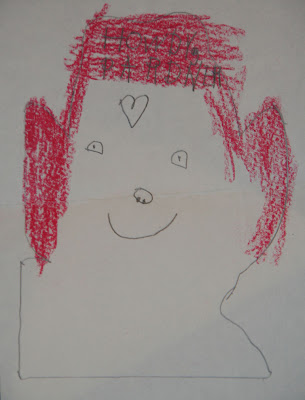 In case you can't make it out, it says "Howdy Pardner" across the top of whatever that is supposed to be. A red hat? Bloody hair? I don't know, and that's just the head covering. The creature itself appears to be a pig of some sort. Why he's wearing a red bomber hat and has a heart tattooed on his forehead remains a mystery to me. And that grin. It haunts my dreams and I don't know why.
I think Tracy is the only one who will ever know for sure. Thanks, Tracy, wherever you are. Sorry I couldn't be your Valen-swine. Please don't hunt me down and kill me for my bacon.
The next one I found deserves an "A" for effort. Purple mountain majesties, beautiful multi-colored flowers, a scalloped edge, and in case you can't make it out from my horrible picture, actual glitter. Glitter, you guys. 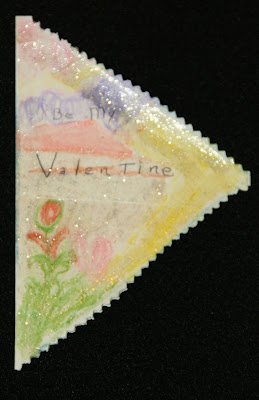 Sadly for me, here's the inside: 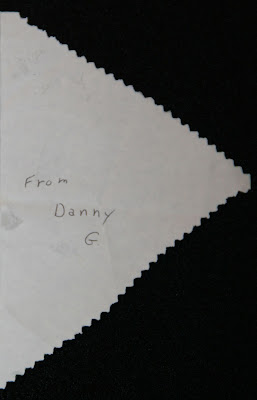 Danny. Not Tina, not Donna -- either of which I would have been more than thrilled with -- but Danny. It's the story of my life.
I'm afraid Danny and I never really hit it off. I think maybe if he had gone with "Love, Danny" things may have turned out differently. Who knows? OK! I admit it! I liked the movie Burlesque! Xtina's costumes were to die for! Oh wait, sorry. That movie sucked. Cher sings like a transvestite and can't move her face. Christina Aguilera did look pretty hot though when she wasn't made up like a hooker clown. OK, I'm back now.
Lastly, I found this Valentine's day mural of my family, each represented by a different heart and helpful label: 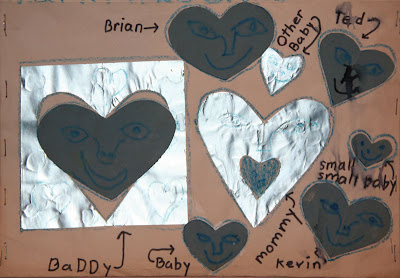 So we have Mommy, Daddy, Kevin (Houdini), Brian (The Snitch) and baby. That about covers it, as far I can recall. Two parents, three boys, one girl... yep, that was it.
Then we apparently have other baby, small small baby, and Ted.
Ted?
Who the eff was Ted? I can almost see missing a couple of babies, because I really wasn't all that observant when I was eight -- and in my defense, small small babies are really small -- but Ted? I think I probably would have noticed an entire other guy living with us.
I still have no idea who Ted may have been, or why he ranked high enough on my list of important people to rate his own large blue heart, but I hope that wherever he and the missing babies are today, they are doing well.
So anyway, Happy Valentine's Day, everyone else. And let me know about that paper heart thing.
FYI, I'm all caught up on Wil Wheaton's dog.
By Johnny Virgil at 3:14 PM