A couple of weeks ago, I got a muscle spasm in between my shoulder blades, up toward my neck, so I went to the doctor. He gave me a prescription for a week's worth of muscle relaxers, and sent me on my way. I took maybe three of them over the course of the next day, and in a few days the spasm was gone. Also, I almost missed work because you do NOT want to wake up in the morning after you take one of those things.
I thought that would be the end of it, but no. For some reason, ever since then, when I hunch over at the computer to type, or extend my left arm while I'm sitting, I get what feels like a tingle in the middle of my back, and it radiates down to the first finger and thumb on my left hand. It's the weirdest thing. I figured it would go away in a day or so, but it didn't. So finally, last week I told my wife I was going to go back to the doctor, and she said, "Why don't you try my chiropractor? He's really good." I was skeptical. I watched as many Two and a half men reruns at dinner time as the next guy, and I'd never really been to a chiropractor, even though I've had friends and relatives swear by it. Me, I've always thought of it as a pseudo-science at best, similar to acupuncture. Maybe there's something to it and maybe not.
So I agreed to give it a shot. I know there are some bone-crackers who get into the kooky-spooky spiritual aspects of things and start talking about your energies and your aura and the color of your poop, but when I had my first appointment, this guy didn't seem like that at all. He seemed to be pretty much focused on the mechanics of your body; your posture, your joints, your spinal curvature, things that made sense to me. It was more like talking to a physical therapist. The other thing I liked about him is he put me on the table with my face nestled in some kind of vinyl butt, looked at my spine, felt around a little bit, and said nothing major was "out," which I think is the highly scientific term chiropractors use when they describe your bones. "Your C5 and C7 are out," they might say. Where they have gone, and what they might be up to while they are out is anybody's guess. Whatever it is, they are apparently not supposed to be doing it. I'm pretty sure it involves a hot-sheet hotel in a seedy part of town.
So he asked me more about the referral pain down my arm, told me to lie facedown on the table, and then hooked me up to electricity. He put contacts on my back and connected wires to them, and then I'm guessing he took the ends of the wires and jammed them straight into a 220 volt socket, because suddenly my shoulder muscles contracted, my arms went straight out and my head tried to pull itself into my ass from the wrong direction. (On second thought, there's probably not really a right direction.) Anyway, this went on for a few seconds until he got it adjusted. After he dialed it back to 11, I was just ever-so-slightly shrugging my shoulders every three seconds, like I just didn't care about something over and over. He put some some sort of moist heat pack over the electrodes and my shoulders, and then left me there for 10 minutes.
When he came back, he worked over the shoulder muscle for a few minutes, rubbed some sort of camphor and menthol goop into my neck, told me he thought my pain and weird tingling fingers were due to a muscular problem, and charged me $65. I didn't feel much different, other than now I smelled like someone rubbed me down with Ben Gay and vodka, so I made another appointment and went home. In my head, I figured I'd give this guy a week or two, and then I'd head to an orthopedic or something.
The next appointment went about the same, and again there wasn't much improvement. He sent me for an X-ray, and what that told him is that due to not having great posture (have you ever seen an X-ray of a drummer's spine?) I had lost some of the "curve" in my neck. There was also some bone spurs in my cervical vertebrae because I'm old as dirt and I guess after you turn 40 your bones start doing weird shit to protect themselves and in another 20 years I'll probably have extra phalanges sprouting out of my coccyx or something.
He said the X-ray wouldn't show a disc problem, so he wanted to get an MRI if my insurance would cover it. Either way, he said he thought I could benefit from a good stretching and decompression. I figured he was going to give me some 5th generation, crooked, copy machine printout of some exercises that featured a faceless figure with an oval head and lots of dotted lines, but instead he brought me into the next room where this happened: 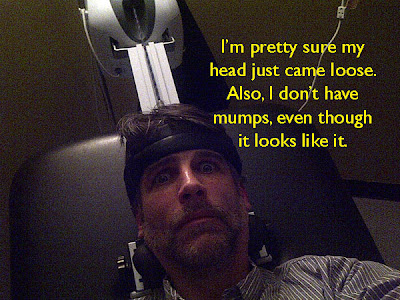 I sat back on the table and he put my neck into a vise, and then strapped my head to this sled-like assembly. Attached to the sled was a cable that ran up to the back of the table, and the whole thing was attached to a computer. He programmed it, and after making sure I wasn't too uncomfortable (I wasn't, considering I was strapped to a machine being controlled by what looked like an IBM 486 pc from the early 90's) he turned the lights on low and told me he'd be back in 15 minutes.
The first time it went to 27 pounds of pull, I was pretty sure I was going to be paralyzed from the neck down. I remembered the quality of the graphics on that video screen and prayed it wasn't running Windows Me under the covers, because that OS was so bad it would pull your head off your body just for the fun of watching you die.

After a while though, it started to feel kind of good. It would slowly pull up to 27 pounds, then release to 14 or so. Then back up again. Before I knew it, the 15 minutes were up, and I wanted one of these things for my living room.
I've been on it twice so far and I can't really tell if it does anything or not. It feels pretty good when it stops, but then again, so does stabbing a fork into your eye. I know one thing, I'm going broke in this place. Really what's happening is I'm paying thirty five dollars for someone to give me a half-assed back rub and then pull gently on my head for 15 minutes.*
What I mean to say is, if it's truly muscular like he says, I could probably go to an actual massage therapist and pay about fifteen bucks more for an hour-long massage.
I have the MRI scheduled for Wednesday, so I'm probably not going back to him until I have some pictures of the inside of my spine. Wish me luck.
*That sounds dirty, but I'm leaving it.
By Johnny Virgil at 5:16 PM