How I Spent My Summer Vacation.

The first day on my vacation, I woke up. Then, I went downtown to look for a job. Then I hung out in front of the drugstore.

The first day on my vacation, I woke up. I went downstairs to scrape paint off the porch with a heat gun and putty knife. Then I passed out.

The second day on my vacation, I woke up. I went downstairs to scrape paint off the porch with a heat gun, putty knife and a respirator. Then I passed out in front of the TV.

The third day on my vacation, I woke up. I hobbled downstairs to scrape paint off the porch with a heat gun, putty knife, knee pads and a respirator. Then I passed out in front of the TV.

The fourth day on my vacation, I woke up and regretted it. I crawled downstairs to scrape paint off the porch with a heat gun, putty knife, knee pads, rollerblading wrist braces and a respirator. I looked like some kind of psychotic exterminator. Then I passed out, but I don't remember where.

Basically, I dealt with 500 square feet of this: 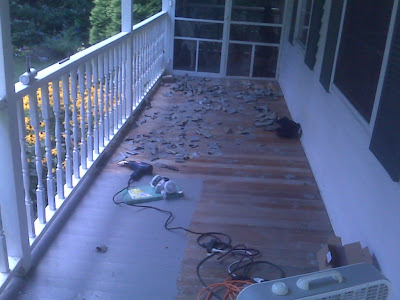 That picture shows about 11 feet of a 70 foot-long porch. Trust me, the entire scraping process sucked ass. I have to say this though -- I give the utmost credit to people who do this sort of work day in and day out. It's a lot harder than sitting on your ass all day moving bits and bytes around, that's for sure.

On day five I rented a sander and vibrated two holes in the side of my thumbs, so the next day I added band-aids and gloves to my dashing ensemble.

On day 8, I watched the sun blister the paint, and I seriously thought about just burning my house down and starting over.

On day nine I said fuck it and celebrated my wedding anniversary, and my wife and I took the convertible out and ended up in Lake George on a lake cruise and I decided that the porch was done until spring.

Today, since it was cold, I turned on the heat for the first time this year. I was greeted with a screaming, grating noise that sounded like a squirrel trying to get out of a blender. I tracked it down to the power vent on the furnace. When I took it apart, the fan inside looked like this: 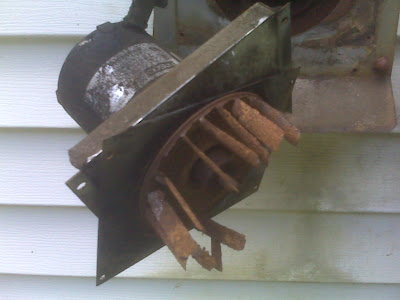 So that's where I've been. Wow. It really has been a while. In part, I blame Twitter. I think we have to break up. It's cramping my style. I mean, if I actually had a style.

Here's the other thing: I've been working on "the book." I hope to get something put together by Christmas, but if I'm writing there, I'm not writing here, so bear with me. I've got some childhood stories that I'm dying to tell, but part of me wants to save them for the book. (You know what they say about free milk and a cow. But you guys would buy it anyway, right?)

On a completely unrelated note, I saw these smug bastards just sitting there in Lowe's this afternoon: 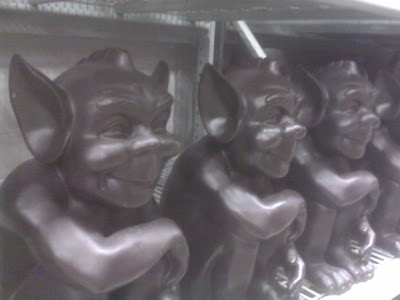 I think they may be coming for me tonight after I go to sleep. I like how their expressions say "No, no -- Don't get us wrong. We're definitely gonna kill you. But we're gonna have some fun with you first."

One last thing: Over there on the right, I've had a link to a blog called The Sheila Variations basically since I started blogging in 2005. I loved her writing style from the first read, and I still do. Sheila is a stage actress, a fantastic (and prolific) writer, and..ok, I admit it. I might be a little jealous of her talent. Anyway, her brother Brendan e-mailed me asked me to pass along a link to his new band, so I said I would. It reminds me a lot of Paul Westerberg. Check it out here if you get a chance, and let him know what you think.

I'll be back soon, but this is September and I have some backpacking to do. So, maybe tomorrow. Maybe early next week. (I'm like herpes. You never know when I'm going to flare up.)
By Johnny Virgil at 12:21 AM