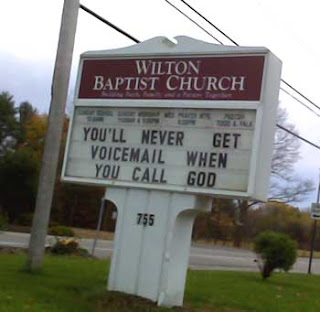 I know this sign isn't entirely true, and I know that because I helped Him set up his voice-mail box a month ago. So I know He has it.

God's kinda old-school, though, and by that I mean He isn't very technical. Put it this way - his VCR has been blinking 12:00:00 since 1975. Yeah. It's Betamax. I was over there last week and we watched Spiderman 5. Where he got that on beta I'll never know. The small miracles amuse him.

The problem with the voice mail thing is that it only rings 4 times before going to VM, so He always turns it off when he's going to just be hanging around. Unfortunately, he's not great at remembering to turn it back on when He goes out, so I can see how the church people may have been under the above impression. Seriously, most of the time when you call, it just rings off the hook.

I keep telling him he should just have it roll over to his cell number, but He says being on the phone with Verizon tech support is just way too close to actually being in Hell.

If you're curious, this is what his voicemail message says:

"Hi. You've reached the number of God. I'm everywhere right now, so unfortunately I can't take your call. My message is very important to you, so if you would leave your name and a number where you can be reached, I will call you when when you least expect it. If I don't get back to you right away, it means that I am out working in mysterious ways. If this is an emergency, please contact my son Jesus, or his mother Mary, and they will handle it. You can have complete faith in them. Thanks, and have a good day."

I called him the other day and got lucky. I let it ring about 15 times and just when I was going to hang up, He answered.

"I was outside raking galaxies. I had to run for the phone. What's up?"

"What happened to that wireless handset I got for you?"

"You're all powerful. How long would it take you to hook it up? Jeez. I tried your cell too. Went right to voicemail. To the system greeting, no less. I thought we got rid of that last week."

"Uh, yeah I don't know what's up with that. I was trying to erase old messages the other day and I think I pushed some wrong button. Anyway, If you called my cell I didn't hear it ring. I think maybe I left it in the truck. It's on vibrate so I can never find the damned thing. "

"Whatever. You should just go Blackberry like the rest of the world. Hey, I know you're busy, but I just wanted to tell you -- you might want to drop in over there in the middle east. Things are a little out of control."

"Oh man. Again? Yeah, I've been meaning to do that. Thanks for the heads up."

"No Problem, G. Get back to it. Oh yeah, by the way -- I've been meaning to ask you: Why'd you put all the oil on one side of the planet and all the people who want it on the other side?"

"I know, right? I crack myself up sometimes. [beeep] Hey, hang on second. It's the other line."

"OK, hang on. I think something might be burning outside. Let me just get rid of ----"

Unbelievable. Great guy, though.
By Johnny Virgil at 7:00 AM