Man, we have shitty clowns.

I've always hated clowns. My mother used to have a velvet painting of a big, sad-faced clown in our house, and every time I got up in the middle of the night to go to the bathroom, I would see it staring at me from the other end of the hallway, half-hidden in shadow, its sad eyes no longer sad but instead evil and calculating.

I know, without a shadow of a doubt, that clown wanted to eat me alive.

Why do I mention this? Well, a while back I was looking in the phone book for coal dealers, and it just so happens that there isn't much stuff between "co" and "cl" in our phone book. As a result, I found myself face to face with a page full of clowns.

Seriously, this area must have the shittiest clowns on the face of the earth. The names alone made me hang my head in shame.

I got thinking about what some of these misfits must look like.

No, I don't know why. And no, I also don't know why I spent two hours of my life scanning pictures and mucking around in Photoshop. Hell, I don't even know why I have a blog, other than it's a place to write down the weird things I notice.

Be that as it may, I mocked up a little picture to go with each yellow-page ad. It's what I imagine these clowns must look like -- based solely on their self-appointed clown names.

Without further ado, I present: Twinkles Twinkles has EVERYTHING to make your event special, as long as your event involves lots of penis, and you consider irreparable damage to your child's psyche special. Also, you do not want to see Twinkles turn around because his thong really leaves nothing to the imagination, including his apparent lifestyle choices.

Next in line: Bon Bon 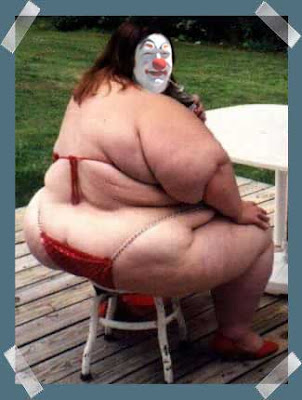 Bon Bon got her name from, coincidentally enough, her favorite snack. Bon Bon likes corporate events and picnics. Especially picnics. Really, anything with food is good. If you hire her, watch her closely because there are some unsubstantiated reports of small children and dogs going missing at her gigs.

Next on the countdown, a long-distance dedication to: Wizzie. I shit you not. 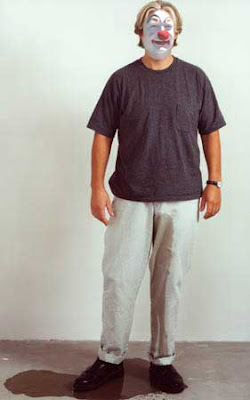 Wizzie also does gorilla-grams. He would have worn his Gorilla costume for this picture, but unfortunately it was soaked with pee. Wizzie puts on a good show, but make sure you have him do his act outside, since he's not really carpet-friendly.

And where, exactly, do you go to become a certified master balloon artist? I was not aware of that advanced program, and would like to find out more about it. I've been trying to get that CM designation for a long time, although I hear they're not as valuable as they used to be. Lots of paper CMs out there with no real-world balloon experience.

And of course, what self-respecting grange-hall hoedown in Hicksville, USA would be complete without: Skeeter 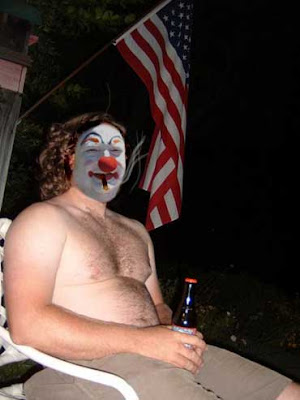 According to his ad, Skeeter has an "amazing" balancing act. I think this means he can balance a plate of potato salad on one knee and an ashtray on the other. I love the fact that he misuses the quotes.

Skeeter also does magic shows. I am willing to bet that any clown named Skeeter is probably pretty good at making beers disappear. I don't know where he got his name, but I think it's probably from the YAAAAAAAAAA! YAAAAAAAAA! screaming noise children make when he "pretends" to bite the head off of Marshmellow. Face paintings are his specialty -- as long as you're ok with the paint looking suspiciously like rabbit blood. I like the misspelling of the rabbit's name. It makes me think the rabbit is stoned all the time, which he would have to be to deal with the stress of working with someone named Yaa-Yaa who he suspects is planning to kill him. I also like how he points out in his ad that the rabbit is "Live" and it gets almost equal billing. It's like sometime in the past he tried pulling a dead, stiff rabbit carcass out of his hat and it didn't go over as well as he thought it would.

Lastly, there are the clowns who can't afford a real advertisement, and just have a listing. Like these two guys:

Keep your eyes peeled. I've heard rumors that there may be a reunion tour in the works. Once they figure out who gets top billing. Mr. Twisty & Nifty Gilifty or Nifty Gilifty & Mr. Twisty. It's a tough call.
By Johnny Virgil at 8:00 PM