Well, I'm going to do it again, in order to point out something that should be fairly obvious, but apparently is not. It has to do with intelligent design, and the people and companies that are in charge of this -- this one single thing that they have to do, and yet they consistently fail miserably at it. Case in point: Badly designed urinals. As punishment, these designers should be pummeled into unconsciousness and then dragged to lie underneath their own urinals, to illustrate to them the reasons that I believe they clearly have no idea what the hell they are doing.

I had this epiphany the other day, and I think I've figured out another reason (besides not being able to see your own junk) why the floor in the bathroom where I work is always covered in a sticky, partially-dried coating of pee.

It was early in the morning, and as a result the floor looked pretty clean, so I chanced the urinal, which looks kind of like this: 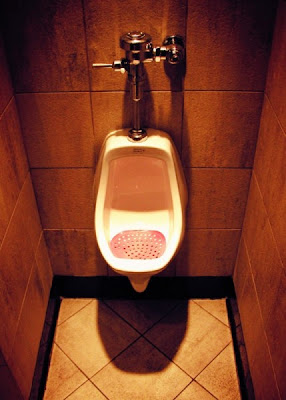 This is just a picture I found on the web, but it's close, other than the fact that it sensibly has walls on either side of it, while ours are literally 2 feet apart with no wall in between, which is great if you want to get up close and personal with someone else's shaking technique, but not so great for me and most everyone else. Anyway, I digress. Take a closer look at that picture and see if you can figure out what's so incredibly wrong up there.

Give up? It's a matter of surface area. More specifically, a level surface area. In all the wrong places. Let me explain. No. There is too much. Let me sum up.

Listen up urinal manufacturers: There's two things wrong here. One, there's a fucking SHELF of porcelain around the whole bottom of this abomination. Because of a little thing called surface tension, combined with another little thing called disgusting slobs, errant urine just sits on top of that wide, level lip in large, ever replenished puddles. That's number one, and it's bad enough.

Number two is simply this: If you're not hung like Ron Jeremy, and you want to avoid adding to the puddle -- or worse, becoming the victim of your own splashback because you stood too far away -- you'll actually have to stand fairly close to the opening. This can be a recipe for disaster.

Why? Let me tell you. Because this urinal is square in front. This means that the two corners of the urinal are fairly close to your legs. As a result, you're only one bad pantleg-crease away from inadvertently contacting the stagnant piss pond on that ledge, which will instantly wick into your pants like they were made entirely of Bounty paper towels. At that point you have two choices: (1) Walk around the rest of the day with someone else's pee staining your pants, or (2) grab a giant handful of wet paper towels and -- in an effort to avoid simply tearing off your pants and running outside and rolling around in a snowbank -- rub frantically at the pee stains until you make yourself look like you just drained your bladder directly into your Dockers.

Don't ask me how I know this.

The solution from a design standpoint is simple. The edge of the urinal bowl should be sharp. A knife edge. That way, if you happen to lose control of your fire hose your urine goes one of two places -- on the floor, or into the bowl. At least that way the only thing you have to worry about is pissing on your own shoes -- and you can do that all day and I won't give a shit because I'll take one look at the floor and be heading for the stall.

This one has it almost right, since there's no way your pants can make contact, and the ledge is tipped in, but still, it could be sharper: 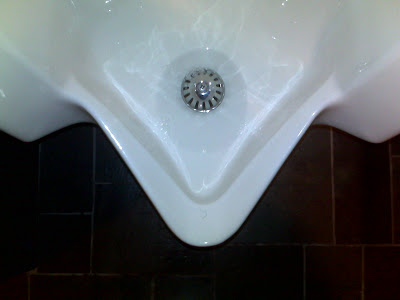 I took another look at the equipment at work, and it says "American Standard 1.0."

I was hoping for their sake that this was a version number, and their later models were better engineered. I did a quick search on the 'net and I found the American Standard model 7.0: 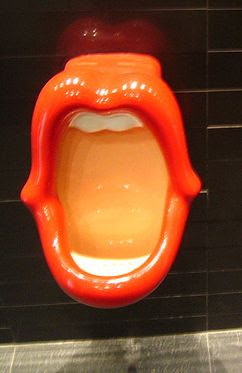 I still don't think they get it.