Remember when you were a kid, and Valentine's day would roll around? Remember how you'd be up late the night before, making sure you had a valentine for everyone, because that was the rule? Remember how you would always make sure to put a little 'extra effort' into that one for the girl or boy you had a crush on? You don't? Well screw you, then. I don't want a card from you anyway.

I was driving home tonight and wondering what I was going to post, when I remembered that in my stash of childhood artwork, there was an envelope full of valentines from my 2nd and third grade class. I did a little digging through the pile, and even found one I had made for my mom.

Let's take a stroll down memory lane. A trip back to a simpler life; to a Valentine's Day when your teacher forced you to give a card to everyone in the class -- even the goofy kid who smelled like sour milk and threw up all over his desk that one time. Yes. Even him.

You could always tell the kids who had thrifty parents -- their valentines would always be reused from last year. They'd take the old card, glue it to a piece of paper like it was art, and then fold it in half and write something in it. Here's an example of a card like that I received from Susan: 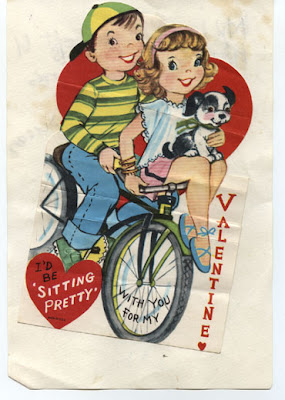 Because of a clearly inferior glue job, I could see that the back of the original card said "To Tina." That hurt me deeply, since I knew I was getting a recycled card. But that wasn't the worst part. Oh no. Not only was the card itself recycled, the text inside the paper it was glued to was also recycled: 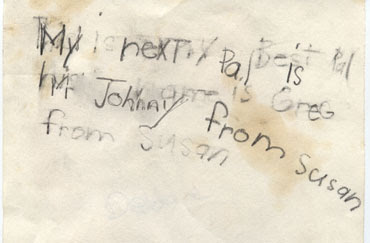 In case you can't make out what's going on here, that bitch Susan had originally written "This is for my best pal. His name is Greg," but apparently Greg pissed in her Frosted Flakes or something, because she decided to give it to me instead. However, rather than expend the minimal effort to actually get a new sheet of paper, she just did a half-assed erasing job and sent it to "Her next best pal" who was apparently me. So it was Tina, then Greg, then me. Can't you feel the love? I know I can.

Then there were the kids who clearly had no help at all from their parents. A folded piece of paper was the best you were going to get from them. Here's one to me from a kid named Danny: 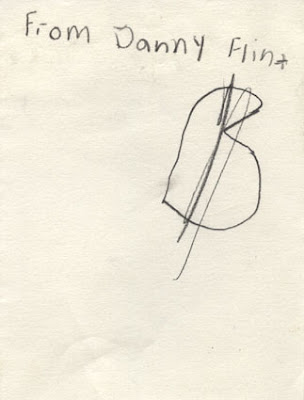 That was it. Nothing inside. In fact, there was no inside. It was just a single sheet, with a deformed sideways heart on it. The heart was scribbled out in an apparent act of defiance against teacher-forced boy-love. I don't blame Danny for fighting the establishment, although he was always a troublemaker. I think he's in jail now. It's sort of ironic.

Remember how I was telling you about going the extra mile for someone you really liked? Check out this painstakingly rendered work of art: 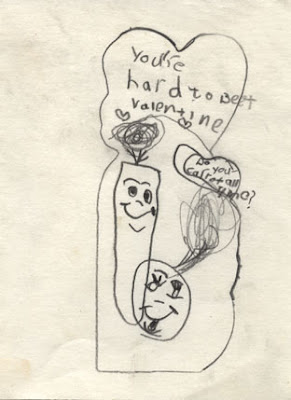 You're hard to beet, Valentine. Do you carrot all 4 me? That's true love right there.

At first, this one made me all warm and fuzzy inside, because there seemed to be quite a lot of work and thought and feeling put into it. Then I opened it and immediately thought, "No, STEVE, I most certainly DO NOT carrot all 4 you, you little homosexual."

I kid. After all, it was a simpler time. I realize that Steve had no idea that his Valentine might have been a little inappropriate. He was just being a nice guy. It reminded me of that one Simpsons episode when someone asked Ralph Wiggum if he was gay or straight and he replied, "I'm not anything yet!" That was us.

Last, but not least, here's one I made for my mother when I was in the 3rd grade: 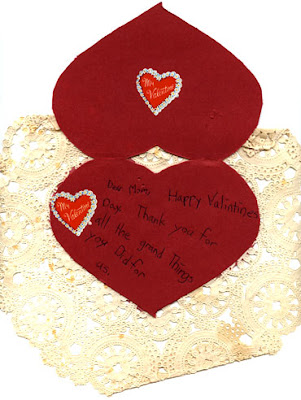 Thank you for all the Grand Things you did for us?

Who the fuck was I? Little Lord Fauntleroy?

"Thank you ever so much for all the grand things you've done for us, mummy. Now, if you don't mind, The Snitch and Houdini and I are off to play a quick game of cricket in the courtyard. Perhaps before we retire for the evening you'd be so kind as to read to us from the Illustrated Chaucer? Very good, then. Ta ta!"

I don't know what I was thinking. I have no recollection of making any of that.

I'm still not too sure about that Steve kid, though.