Is Christmas over already? Holy crap.

When I was a kid, we lived in a raised ranch style house. If you don't know what that is, here's a description. Basically, it meant that when you walked in the front door, you were on a small landing with a set of stairs going up and another set going down. In our house, the bedrooms, kitchen, dining room and living room were upstairs, and the "family room" was downstairs. In order to keep some heat on the bottom floor, we had a magnetic vinyl accordion door at the bottom of the stairs. In the winter, this was almost always closed. Unfortunately for us, it also made quite a racket when you opened and closed it, due to the metal track and the magnetic latch. Why am I telling you about the layout of our house? Because that door was the only thing separating The Snitch, Houdini and me from our Christmas tree and the glorious treasure Santa brought us on Christmas morning.

For quite a few years, we were forbidden to go down there until our parents were awake. That wasn't really such a good plan on their part, seeing as how all three of us were usually up and out of bed at 4:30 am, and there was no way they were going to sleep through that. Finally, in an effort to get more than two hours sleep, my parents decided to simply pick what seemed to us to be an arbitrary time. It varied, and thinking about it now, I believe it was dependent upon several variables, including our behavior and how late Santa had stayed awake deciphering Korean assembly instructions on Christmas eve.

Most of the time it was 7 or 8 am. If we made giant pains in the asses of ourselves, that could be pushed to 9, with threats of (gasp!) after church, and nobody (except maybe my parents) wanted that. There was some quiet whining, but for the most part we were never better-behaved than we were between the hours of 5 am and 9 am on Christmas morning. I'm still not sure which was worse -- going to church first and trying to sit still for an hour in utter anticipation, or seeing it all first, and then being forced to leave it behind and sit in church for an hour just thinking about the stuff you barely had a chance to play with.

I think there were two main reasons we weren't allowed downstairs -- one, our parents wanted to witness us being surprised and two, Santa, being sort of a slacker, never wrapped anything. I've mentioned before about how we'd search to find the presents my parents had hidden under the stairs, or in the attic, but the ones we found were never from Santa. All Santa's presents appeared magically out of thin air while we slept.

We could never quite figure it out. Apparently, we weren't too bright, and we never questioned why my father always showed up at my grandmother's house a little late on Christmas Eve, after "working late." I am pretty sure the words my father most dreaded to see on that night were "some assembly required" and "batteries not included." He would get home from work and frantically build stuff until he had to meet us, then, after we got home and went to sleep, he'd finish everything up and put it under the tree. No wonder the poor guy wanted to sleep in a little.

As far as the whole Santa thing went -- I had some suspicions, but, on the other hand, I also believed in magic. I was a firm believer in Santa for a long time after all the kids in school were telling me he was fake. I distinctly remember slipping out of bed late one Christmas eve and eavesdropping on a conversation between my mother and father. They were sneaky and evil. Instead of yelling at me to get back to bed, they pretended they didn't know I was there. The conversation went something like this:

"I'm starting to get a little worried."

"You think he's not coming?"

"I'm not sure. Normally, he'd have been here by now. Maybe he had problems with the reindeer and he's running late."

"That could be. Or maybe someone upstairs isn't really asleep yet. I'd better go check."

To this day, I know from experience that there really is a way to force yourself to go to sleep by sheer willpower, but I seem to have forgotten how it's done. It's a shame, because it could really come in handy on some Sunday nights when you can't sleep and have to get up for work the next day.

We had no chimney on our house that was bigger than four inches in diameter, and that one went directly into a natural gas furnace in the downstairs hall closet. I knew he wasn't getting in that way, because I had seen that thing with the door off, and unless Santa was fireproof, those solid walls of blue flame looked pretty impenetrable.

I raised that particular concern one year, thinking we should maybe leave the back door unlocked for him, and it turned out that our particular version of Santa just needed a fireplace and he could magically appear. He wasn't picky about it either, because our fireplace looked like this: 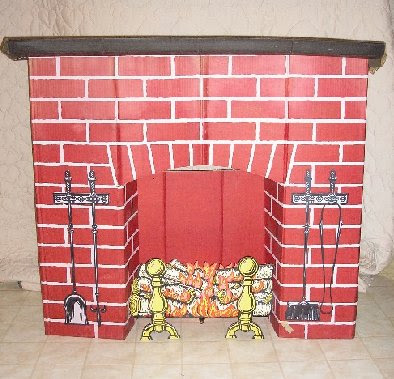 Every year, my father inserted tabs into slots, locked them in place with brass-headed fasteners, and paved the way for our magical back-door Santa. Behind the "logs" there was a small orange light bulb and holder for a little pinwheel. The heat from the bulb would cause the pinwheel to rotate, casting weird shadows behind the logs. Voilà! Ultra-realistic "flames." I remember that it had to be wired to the wall so it didn't fall over when you hung full stockings on it, so it was completely plausible that a 400lb fat guy in a red suit with a giant sack of presents would have no problem at all simply appearing inside of it without so much as popping tab A from slot B.

One Christmas morning, we decided that we'd had enough of the aforementioned iron-clad rule to stay upstairs. Do not go near the accordion door, do not even go down on the landing. Otherwise, your mean parents will take everything Santa gave you and give it to the less fortunate. And while we had nothing against the less fortunate, we knew that the big man usually did pretty good by us, and there was no reason to get carried away.

There was one thing our parents didn't count on, and that was Houdini and his really small head. Well, two things actually, since Houdini's small head was of no use to us without this: 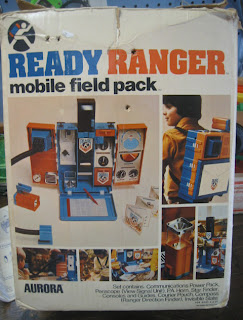 I was nothing if not a Ready Ranger. I know, that sounds really gay in retrospect.

"I have an idea," I whispered. "You guys want to to see what we got from Santa?"

"We'll get in trouble," Snitch said. "We can't sneak down. Daddy will hear the door."

"Yeah, but I don't think we have to. Houdini, go in my room and get my Field Pack."

A few moments later, he came back with the kit, and I opened it up. If you're not familiar with this piece of ultra-high tech spy/survival gear, all you need to do is look at that picture up there and figure out what the tall black thing is. I popped it free.

I held the periscope through the railing and tried to angle it to point through one of the little triangular openings in the top of the accordion door, but it wouldn't work. I couldn't get the angle right. If I adjusted it so I could actually look through it, all I could see was the door. In order to tip it so I could to look through the tiny openings in the top of the door, I had to hold it out beyond the railing, and then I couldn't get my eye close enough to look through it.

"Houdini," I whispered. "Does your head fit through the railing?"

He immediately tried it, and it popped through like we had buttered the sides. I already knew mine wouldn't fit, mostly due to my fat head and ginormous ears. Also, I still had recurring nightmares about the one time I actually managed to get my head jammed between the balusters on the stairs. I screamed bloody murder for what seemed like an eternity while my mother ran around frantically trying to figure out a way to free me. Eventually, she really did butter my head, and I wasn't going there again.

After he pulled his head back out, I said, "OK, now lay down and stick your head back through, and when you're set, I'm gonna give you the periscope."

He laid down on the floor, stuck his head through the middle two balusters, and put his arms through the openings on either side. I handed him the periscope.

"I'm not gonna," he whispered defensively.

Of course he wouldn't drop it. Why should he drop it? He was only lying on the floor with his head sticking through the railing, barely able to move his arms.

"OK, now hang it down a little bit, and see if you can get it pointed through one of the little openings in the top of the door. Then tell us what you see."

It took him a second to get situated, but then he struck the mother load. "Whoa," he said, breathlessly.

The Snitch did a little dance of joy. "What else?" I asked impatiently.

"Those fighting robots you wanted," he said.

Score! That was all I needed to hear.

"OK, give that to me and come on back through," I said, as I sat on his back and pried the periscope from his hands. He didn't want to give it up, but he was in no position to resist. Luckily, he didn't have an "outer ear" problem like I did, and his head popped back out effortlessly.

"Good job," I said, already deciding in my head that Red Rocker was going to remain undefeated forever. After we packed up the Field Kit, we immediately went back to being the best behaved kids in the world for another 3 hours, secure in the knowledge that our magical back-door Santa hadn't let us down.

A belated Merry Christmas, everyone. Here's to a fantastic 2009!