It started a few weeks ago, and it's been getting worse ever since.

Now that the political commercials are finally over, it's time for the tax prep commercials to start rearing their ugly heads. They are airing constantly, and it's really beginning to annoy me.

I don't know about you, but I enjoy getting raped by the federal and local government every year. It makes me feel good about myself; like I'm doing something to help out. Regardless, these twice hourly reminders of my exemplary civic duty do nothing to improve my mood.

There's one commercial in particular that creeps me out a little, for multiple reasons. Maybe I'm the only one. It's the new TurboTax ad, and it stars these guys: 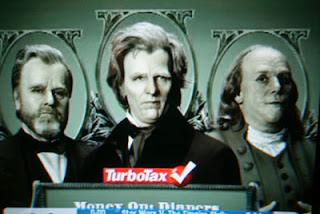 So the premise is, these three guys show up where you are and give you money and tax advice. They are, ostensibly, money come to life. Or -- more precisely -- the people-who-appear-on-money come to life. However, for some reason they keep their "money-like" coloring when they accomplish this magical feat. I don't know why anyone thought this was a good idea. Maybe it's because if they didn't, they'd just look like three creepy guys dressed up for some kind of historical reenactment.

So the upshot of this decision is that they have a pale green cast to them, which is supposed to remind you that they are straight out of your wallet. There's one problem with that -- they don't look like money that has miraculously come to life. Instead, they look like walking corpses. Zombies, maybe. Somehow-or-other undead, and slightly gone-bad. Probably closing in fast on stinky, in other words.

I was hoping to find the commercial on youtube, but no luck. Instead, I had to take a few stills for your enjoyment.

Here's where Ben is asking the guy who is still alive how something so small can cost so much, and telling him that he can get big deductions for his kid. You can't see the guy's face in this snapshot, but he looks intrigued rather than horrified. I would have tucked that kid under my arm like a football and jumped head-first through the store's plate glass window to get to my car. 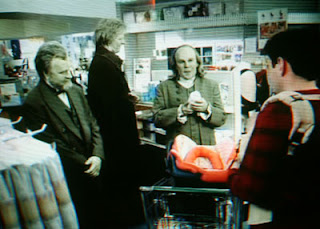 In this next picture, Grant tells the stroller guy that it smells like his deduction needs a diaper change, but my theory is that he finally just caught a whiff of his own decaying flesh. Also, I am pretty sure Jackson thinks he's an asshole. 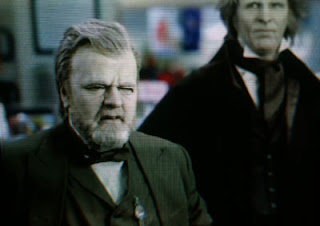 In this next shot, Ben Franklin tries to convince the guy that a handy in the alley behind the store is totally deductible: 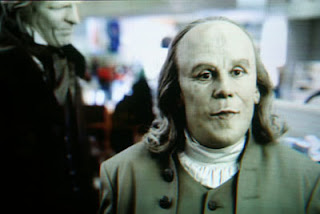 No, I'm kidding. I made that part up.

And of course this last frame is right before Ben lunges at stroller guy and tears his throat out, and then gives his fatherless infant a demo of how Turbotax can help you deal with your inheritance tax. 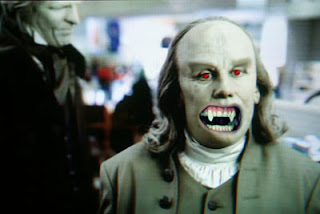 OK, I made that part up too.

Anyway, I've decided I'm going to use Tax Cut this year, even though that slacker guardian angel mascot of theirs is only marginally less annoying than the rotting presidents (and Ben*). Mostly because I don't want a rotting historical figure to be my backup if I get audited.

For a bar fight maybe. That'd be cool. But not for an audit.